Home / Blog Posts / La Sportiva Crossover 2.0 GTX Review: Best on the market, but not for

La Sportiva Crossover 2.0 GTX Review: Best on the market, but not for long. 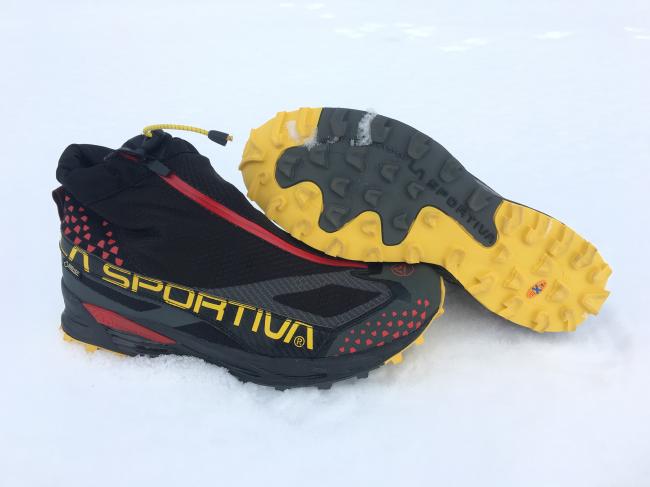 The La Sportiva Crossover GTX was one of the original winter shoes with a gaiter integrated into the upper.  I’ve had the first version of the Crossover for over 4 years now, and still use it from time to time.  It was built on the original C-Lite platform and last, and offered a snug fit (maybe too snug for really cold days) with plenty of protection for hard, frozen ground.  Back then, the original Saucony ProGrid Razor, which I never tried, was the only other shoe with an integrated gaiter.  Next came the New Balance MT110 Winter (throwback Biker Nate Review :)), which had by far the best upper of any winter shoe w/integrated gaiter, but inexplicably had the same summer/race outsole that the regular 110 had which offered very little traction in mud and snow.  I still use the 110W (and even have a backup pair) on days where I’ll be in snow, but I can still find purchase to the ground underneath, or if I’m going to do a mixed, road and trail run and the trails have 2-6 inches of fresh powder on them.  Since then, there have been no other attempts by any company to make a winter shoe with an integrated-gaiter-upper, other than La Sportiva’s update to the Crossover GTX with the Crossover 2.0 GTX.  There are some improvements, which I’ll detail below, but ultimately it is a very similar shoe to the original Crossover (for good and bad).

The upper is obviously the most atypical part of the shoe, and what makes it unique in the market.  It is fairly warm, protective, and fits medium-narrow throughout.  The biggest difference in the fit from the original Crossover is the change in last to the Tempo 2 Ergo (same as the Mutant) from the original’s Racing Lite (similar to Bushido which is on the Racing Lite Ergo) last. The latter was more snug and a bit more curved in shape.  Internally it is nearly the same, with a GTX booty design and mesh outer upper.  The gaiter is a pretty thin and stretchy material that is effective at keeping snow and dirt out, but is by no means waterproof.  The upside to this is that it is more breathable, but for the type of conditions I’d look to use the shoe in, I’d prefer to have a full soft-shell type material cover the entire outer, including the gaiter as in the MT110W.  As it is, the upper is functional, but I think overbuilt, and the GTX booty design is one I’d rather see go.  It adds a lot of weight since it necessitates two full layers of material, plus overlays.  The outer layer gets wet and adds even more weight, and worse yet is the seam that is always present on the inside of the heel cup on GTX shoes.  This almost always causes some level of irritation in the heel on uphills on almost any GTX shoe I’ve ever run in.  Some are tolerable, and some are deal breakers.  In the Crossover 2.0 GTX it is somewhere in between. 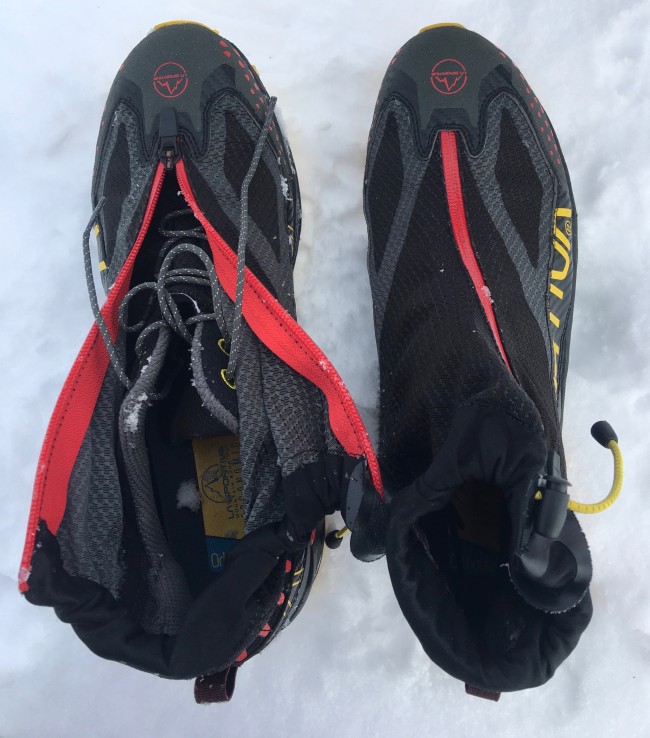 Basically a regular GTX design with a stretchy, zip-up gaiter.

The biggest overall design that needs updating for the Crossover 2.0 GTX is the gaiter.  It is much too short, so I had a hard time even keeping it above where my tights end, especially if I get into any significant post-holing (i.e. deep, usually crusty snow). Furthermore, the method of enclosure is a small bungie cord that, to get tight enough, requires that you pull quite a bit of cord which is then hanging off and bouncing around.  Granted, you can cut the cord after finding where you like the adjustment, which I did on the original Crossover, but it is just not a great design in my view.

If you’ve run in the La Sportiva Mutant, then you know exactly how this shoe will ride: sort of chunky heel, pretty supportive midfoot/high arch, and lower and fairly precise forefoot.  The one difference being that they use the AT endurance rubber compound rather than the stickier/softer XF rubber on the Mutant.  This makes the Crossover 2.0 GTX more firm, especially given that it is also going to be colder out when you are likely to use it.  Not much else to really say about it.  The ride is not super inspiring, but it also gets the job done and is both protective and precise enough to function well enough in its intended environment, even though I’d prefer a lower heel height and less structured midfoot. 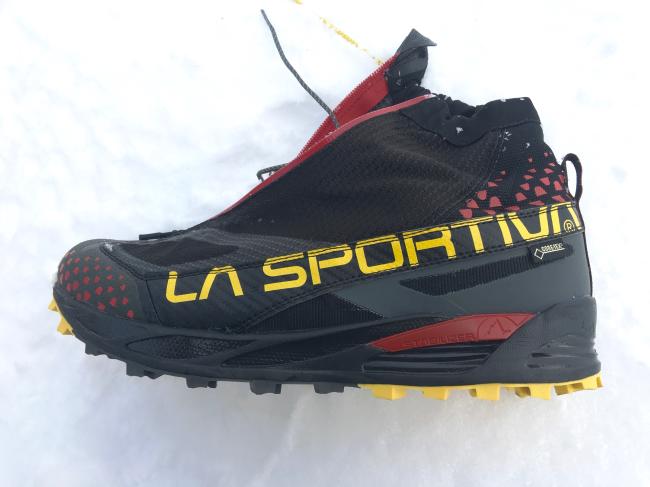 Same midsole and outsole as the Mutant.

Like most La Sportiva shoes, the outsole is quite good.  It uses their tried and true V-Groove outsole pattern that was on everything from the original C-Lite, the fantastic X-Country, Anaconda, C-Lite 2.0, Mutant, and both Crossovers.  The design is great and no reason to mess with what works.  It handles both dry and muddy/loose trail, and is deep enough for snow, but the lugs don’t sheer off even if you have to run a stretch of road.  The AT compound is extremely durable and yet is still adequately sticky for most uses even if it isn’t as sticky as the XF climbing approach shoe rubber that is on the Mutant and X-Country.  In the end the outsole is the shining component of the shoe. 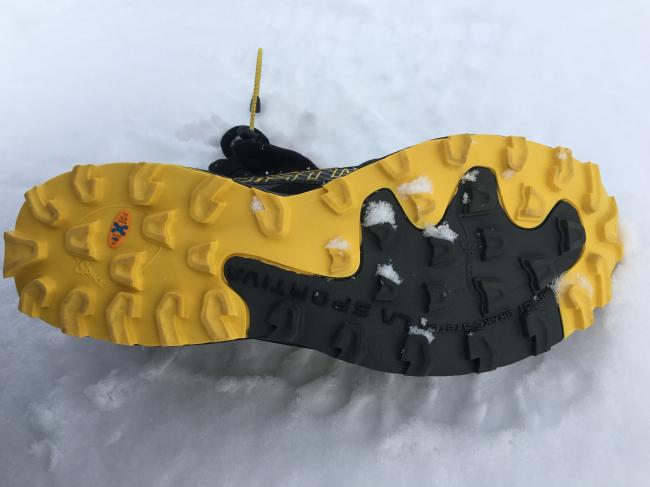 Overall, the Crossover 2.0 GTX is the best winter shoe with an integrated gaiter on the market.  The only other one I know of is the Salomon Snowcross, which, although it has a better upper material, is on the aging Speecross platform that I’m not fond of, has integrated spikes (not ideal for all around winter use), and a poor last/fit.  The Crossover 2.0’s dominance in the current market, with sparse competition, is about to change later this year when there will be a brand new crop of next generation winter shoes hitting the market from Saucony (Razor ICE+ video via TrailrunningReview), The North Face (Ultra MT Winter shoe preview via Competitor; photo# 8), Salomon (S-Lab XA Alpine video via TrailrunningReview) as well as some fantastic looking options from Scarpa (Atom S and Neutron G via The Pill Magazine) that are, as of now, a European only release (just for the Scarpas; the others will release in the US market).

The point is, there are going to be a wide range of new shoes in this niche that are all using much more updated upper construction methods that will make it hard for the Crossover 2.0 GTX to remain the most appealing option.  It has some good things going for it, and if La Sportiva can modernize the upper, it could still be a relevant shoe in this market.  I feel the price is also too high for what you get.  At $190, I expect a much more sophisticated upper than basically a GTX shoe with a stretchy mesh gaiter (that is too short) over the ankle. I can nearly replicate this with just a regular GTX shoe and a lightweight gaiter, and end up with a much lighter setup overall.  If thought into the design, a winter shoe with integrated gaiter can actually be much lighter than a traditional GTX shoe since you don’t have to use a GTX booty and the shoe can offer much more protection from the elements in a simpler package than adding a gaiter to a standard shoe.  As soon as companies start to refine this design, as appears to be happening later this year, I think it will be hard to not use a specialized winter shoe like these for snowy conditions because they will just be that much better and more enjoyable to run in when the weather gets nasty.

Disclaimer: These shoes were provided for free of charge by La Sportiva.

The La Sportiva Crossover 2.0 GTX is available for purchase at Running Warehouse.

You just finished reading La Sportiva Crossover 2.0 GTX Review: Best on the market, but not for long.! Consider leaving a comment!