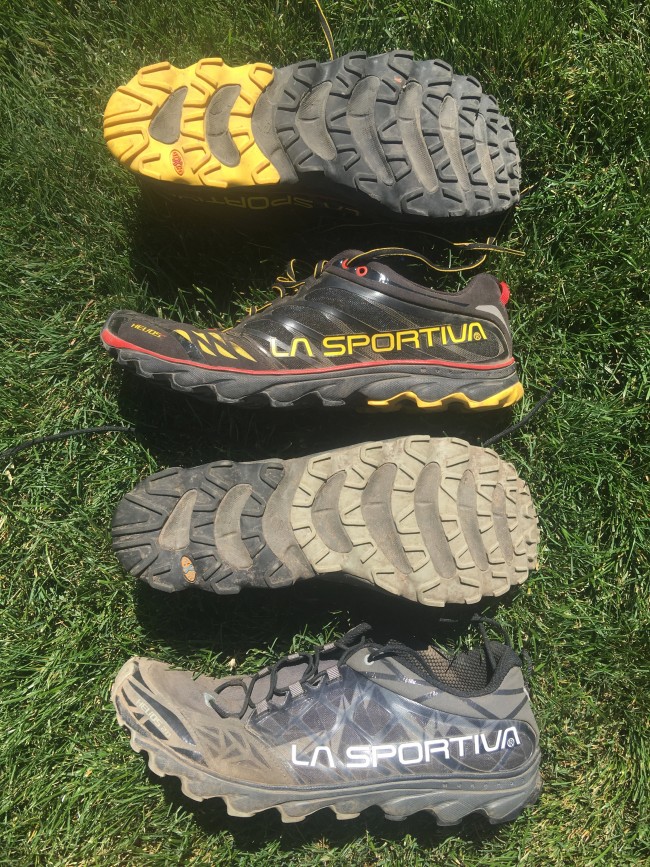 The original Helios came out in 2013 and used the concept of La Sportivas Vertical K shoe but in a more traditional package.  Essentially the Helios 2.0 and SR remain fairly unchanged at their core compared to the original.  Some upper modifications and rubber compound changes being the most notable. Because the SR and 2.0 are fairly similar I’m going to review them together.

In regards to the upper, the SR and 2.0 are nearly identical.  The upper is secure while still being fairly sock-like and generally suits the type of ride and application La Sportiva is going for with the shoe.  The most notable differences are that the 2.0 has no heel counter (something that works really well with this shoe) and the 2.0 has speedlaces (which I removed…the SR’s regular laces work much better and my distaste for speedlaces is well known for regular Runblogger readers).  Overall, the uppers are pretty good.  La Sportiva tends to overcomplicate uppers unnecessarily with many different materials and overlays and these are no exception, but they aren’t distracting in any way. 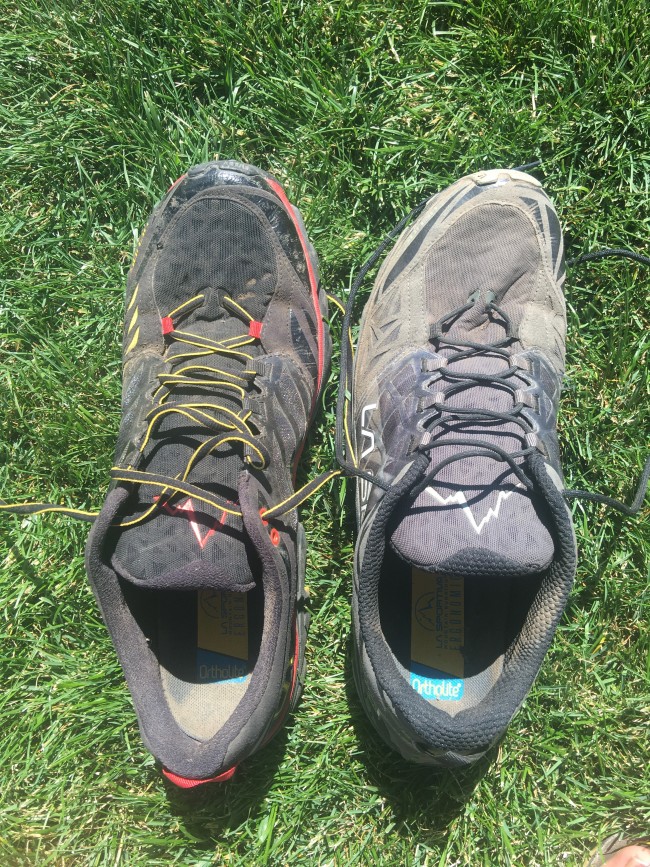 Fit is very similar, particularly after I removed the speedlaces from the 2.0.

The midsole component is literally unchanged from the original Helios and is the element most holding the shoe back in my view.  The “Morpho Dynamic” wave-like design doesn’t hold up in practice in my view for a general use, light-weight trail shoe, although, if you follow Anton Krupicka, he seems to feel they work great scrambling on rock.  The shoe is super flexible and the troughs of the wave shapes create really thin areas that, inexplicably, also have no outsole material?!?  The SR is supposed to have a rockplate on top of the midsole, but I had a real struggle feeling like it added much protection to the shoe. 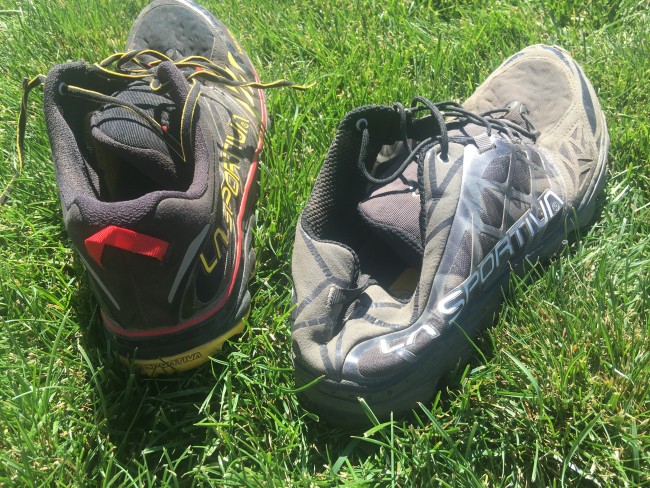 No heel counter on the 2.0 (on right) is the biggest upper differentiation.

Like most La Sportiva shoes the outsole compound and stickiness is fantastic while still being durable.  Unlike most La Sportiva shoes, which usually feature full outsole coverage, the wave design, including gratuitous cutouts, are not a great choice for what amounts to a technical mountain racing shoe.  Not only does it not protect the foot super well, the midsole and rubber is prone to getting destroyed by rocks and sharp objects.  This design needs to go in my view.  Not that it can’t work ever, it is just that the shoe would be so much more versatile if it had more rubber coverage and a more standard, non-wave oriented design.  In fact it would be a really fun mountain racing shoe if that was the case! 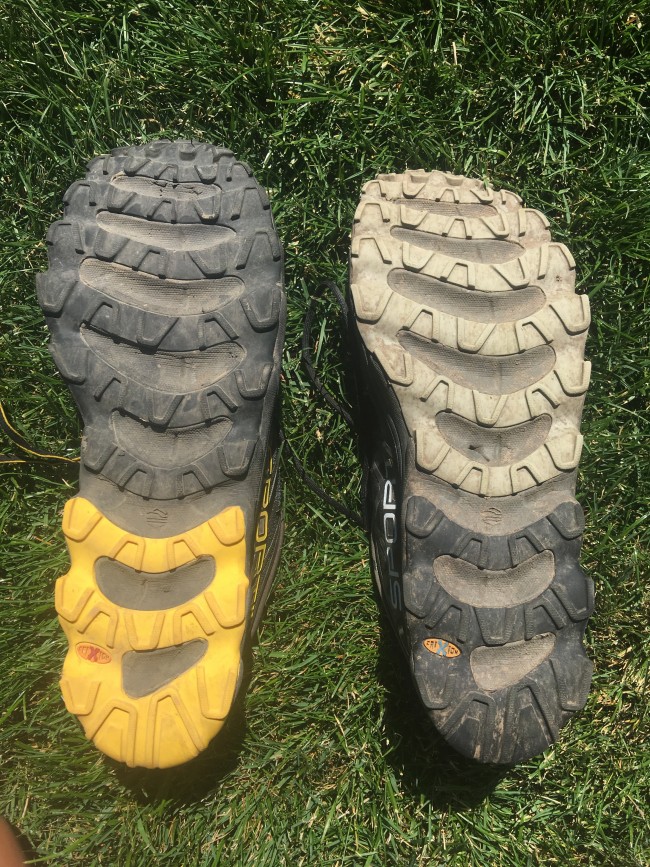 Helios SR on left, 2.0 on right. Of note, SR has durable rubber on heel and sticky on forefoot where 2.0 has durable all over. Also, take a look at that puncture hole from a piece of gravel in the midsole on the 2.0…one of many reasons that I don’t prefer large cutouts.

There are a lot of things I really appreciate about La Sportiva’s design approach and how they go about making mountain specific product.  They typically take their time creating shoes that are purpose built for certain applications and then after they are released, they rarely get updated and if so, it typically takes a few years at least, which is something I actually like in the now common, 6-12 months and it’s gone product cycle.  La Sportiva makes a quality product and keeps it around for a while; I’m not sure why this concept isn’t followed more in the market since I think it says something about your product (that it is inferior, or wasn’t good enough) if you are already replacing it in a year or less.

La Sportiva’s approach is great when a product really hits the mark in its category.  The Mutant in particular is a example of this.  It’s a unique and quality shoe that performs well and as intended. There is no major reason to update a shoe like this unless you have new and significantly better materials or design ideas.  For the Helios, on the other hand, it’s time has come.  While it does have some good things going for it, the Morpho Dynamic outsole design with way too much exposed midsole needs to go and has passed it’s useful lifespan as a technology.  I’d suggest La Sportiva revive the Skylite (iRunfar review of the Skylite from 2009; oh the days when 12.1 oz was “fairly lightweight”) and use a similar midsole height as the Helios but with the Skylite’s full rubber outsole or something similar with lower lug height designed for drier trails and racing but with La Sportiva’s mountain running design ethos.  As it is, the Helios SR and 2.0 are fun quasi-minimalist shoes with sticky rubber that work great on smoother trails and short little scrambles, other than that, for me they’ve sat on the shelf.