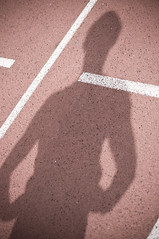 My run today was either brilliantly insane, or insanely brilliant – I’m still not really sure which. One of the things I’ve realized in training for a Fall marathon (or two) is that heat can make it very difficult to get good long runs in during the summer. I’m not a morning person, so AM runs don’t happen often, and PM runs are rare because they interfere with bedtime for my kids. As a result, I usually run in the late afternoon, and slugging out a long run in 80+ degree heat is not much fun. Given this, it was with some trepidation that I faced the prospect of running 15 miles on one of the hottest days of the summer in NH to date.

This afternoon, with the car thermometer reading 93F, I questioned the sanity of trying to run 15 miles today, and my wife forbade me to even attempt it in the afternoon. However, being the incredibly supportive person that she is, she suggested an evening run, so I decided to head out around 5:30, with the temperature having only cooled to 87F. As I expected, it was hot, and after the first few miles I started to feel the effects. By mile 6, I was contemplating taking a walk break, but managed to convince myself to keep running until I arrived at a local park where I could refill my hand-held water bottle and take a quick break – that was right around the midpoint of the run (mile 7.6 or so). It would not be an understatement to say that at that point I was dreading the second half and thinking seriously about cutting it short.

It just so happens that the park I stopped at is adjacent to a local high school track, so I decided to do a few laps to see if I could get my groove back. The sun was relenting at that point, but insanity was beginning to take hold, and I got the wild idea to knock out a few intervals. Eight miles into what was supposed to be a long slow run, there I was standing on a high school track, fully convinced that doing track intervals would be a good idea (not to mention that I was still 3+ miles from home). I don’t know where the idea came from, but I rolled with it, and, believe it or not, it was wonderful. I switched from podcast to music on the Ipod, and shifted into a gear that I didn’t realize I had in me. I wound up doing four 440’s, two 880’s, one 660, and finished with two more 440’s. The first tree were run at around a 6:45-7:00min/mile pace, and the remaining six at 6:00-6:15min/mile pace. I did half-lap walk breaks in between each interval, bringing my total mileage by the end of the session to about 12.25. The whole idea made no sense, but running fast felt incredibly good, and something about the experience of being alone on the track near sunset had a magical quality that is difficult to articulate. Even the 3 miles left to run home felt easier than any of the first eight (I ran mile 15 at a 7:45 pace). All told, I ran 15.05 miles at an 8:30min/mile pace (walk breaks on the track included).

I’ve always derived a strange sort of pleasure from doing intervals, and this run has inspired me to get back to the track more often. Will I build them into future long runs? Maybe, maybe not, but for tonight it was a dumb idea that paid huge dividends by allowing me to get in the miles needed, and to be honest, I feel great!