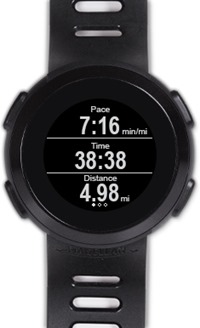 A few months ago my friend Sam stopped by the clinic for a run. Sam and I share a love for experimenting with running shoes, but I discovered that day that we also share a fascination with tech gadgets and iPhone apps. Sam had brought along a new watch that he was playing with, the Magellan Echo, and by the time he left I knew I had to have one (read Sam’s Echo review here).

Given that I review running gear for a living, I can justify such an extravagance even though I already own a GPS watch (Garmin 620). I figured that if I liked it a lot I’d hang onto it, and if I didn’t like it I’d write a review saying as much then sell it on Ebay. After over a month of consistent use I can now say that this watch isn’t going anywhere. I absolutely love the Echo.

First off, the Magellan Echo is not a GPS watch, let’s be clear about that at the outset. It’s actually a pretty useless piece of tech on its own. It doesn’t even have a stopwatch or alarm as far as I can tell. All it does is display time and date. But, pair the Echo with an iPhone and you have one of the coolest toys I’ve played with in awhile. The Echo functions by syncing with an app on your phone. It displays data recorded by the phone via the app directly on your wrist. The buttons on the Echo also become controls for your phone. You can start and stop your workout, pause music, skip songs, etc. all from your wrist without having to touch your phone. 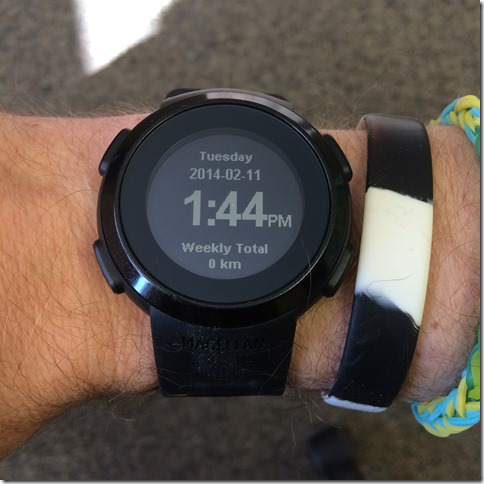 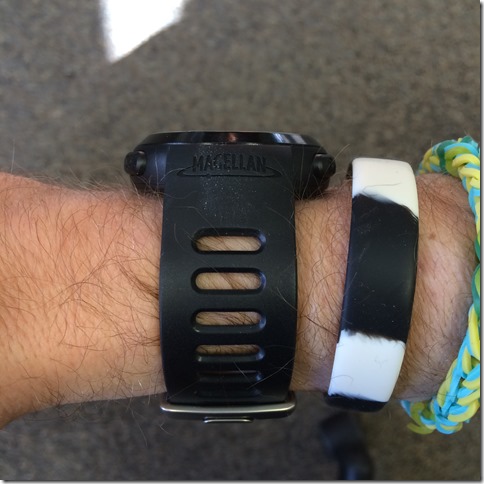 If you don’t run with an iPhone and have no interest in doing so (Magellan claims android support is coming soon), then you can stop reading this review as the watch is not for you. Without a paired phone the watch is dumber than a basic stopwatch. Personally, I used to never run with my iPhone, in part because I’ve always hated running with a phone attached to my arm. I’ve found though that if I can put it in my jacket’s chest pocket in winter, or hand-hold it in summer (using either a Go-Strap or HB Tune hand-held case), I can take it along with minimal interference.

My workout kit for the last month or two has pretty much been my iPhone stashed in a jacket pocket, the Magellan watch on my wrist, and a pair of bluetooth headphones under my winter hat. The phone plays music and feeds run split summaries through the headphones, and sends the real-time run data to the watch. The watch controls the phone and the music coming through the headphones. The three devices work together beautifully, there are no wires to mess with, and I don’t have to carry my phone on my arm or mess with it on the run.

To use the Echo you need to pair it with a supported App. Currently the list includes Strava, MapMyRun, Wahoo Fitness, and iSmoothRun (more apparently in the works). I started playing with iSmoothRun last Fall when a client told me it could measure cadence (it does so pretty accurately). It’s a simple yet very functional app, and I’ve fallen in love with it. To continue with this review I’m kind of also going to be reviewing iSmoothRun since the watch needs an app to work (some of the other apps offer greater functionality, DC Rainmaker reviewed the Echo as it functions with the Wahoo Fitness app for one example. I like iSmoothRun since it is simple and intuitive, and tracking has been rock solid relative to my Garmin)

To begin a run with the Echo + iSmoothRun combo you first need to pair the watch to the app on your phone. The watch communicates via Bluetooth, so that needs to be turned on in your phone settings [but you don’t pair there, you pair in the app – full instructions here (Magellan) and here (iSmoothRun)].

After opening up iSmoothRun you press the upper left button on the watch to start searching for a connection, then in iSmoothRun you initiate pairing in the app Settings—>Displays—>Choose Magellan Echo: 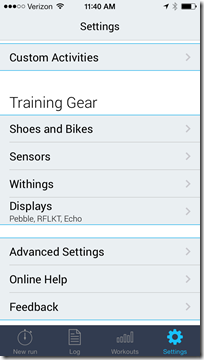 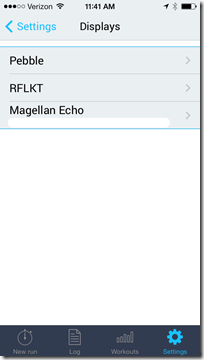 Once you’re synced you can start setting up how the watch will interface with the app. 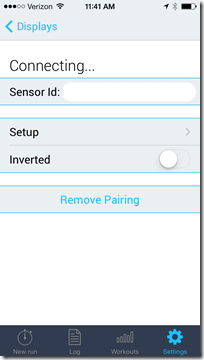 In the above image, Inverted lets you change from black text on a gray background to gray text on a black background. Pressing setup allows you to customize screen templates that will display your choice of metrics during a workout (all measured by your phone, not the watch itself). I usually have 3-4 screens set up, but most of the time I just use the screen display in the 1st image below (distance, pace, avg. pace): 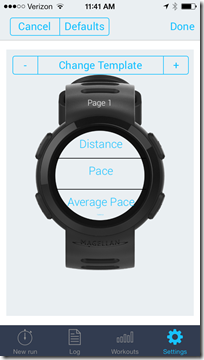 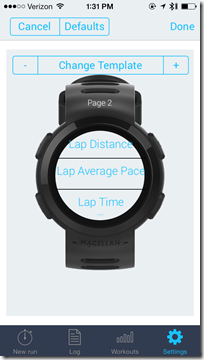 Once you have things set up the way you want, you can start a workout by going to the “New Run” screen. You can choose your workout type (usually a Free workout for me, but in the case below I had created an interval workout using the app’s workout builder – very cool!).  Here are a few images showing the workout builder interface: 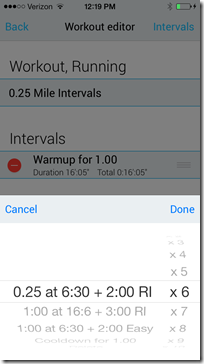 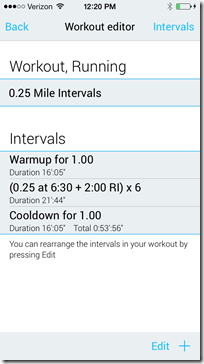 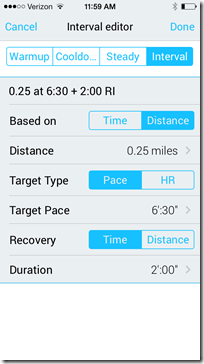 You can choose your shoes to track mileage (another huge plus for me and partly why I have been using this app so much lately), and also choose a music playlist from those available on your phone.

To start the workout I usually hit the play button and then immediately pause the phone, turn the screen off, and stick it in my jacket chest pocket. Then once outside I control everything and view my data via the Echo. Press the bottom right button on the watch to start/stop the workout, top right button to control your music (one press to pause, double press to skip ahead one song). When your workout is done you pause it using the bottom right button, take out the phone, and hit the stop button. 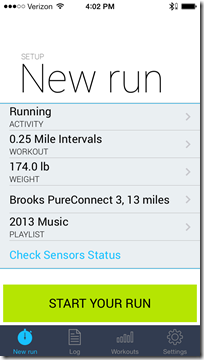 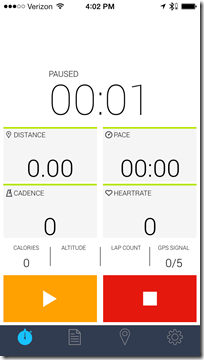 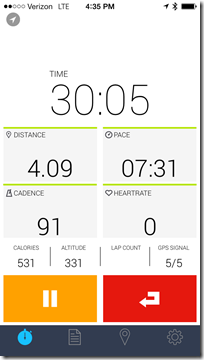 When the run is over, iSmoothRun provides a nice data summary of run stats (interval split image foiled by a ringer adjustment!): 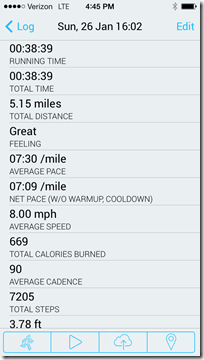 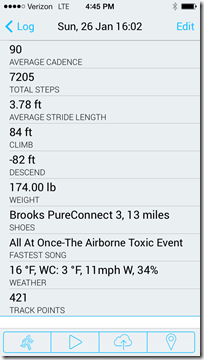 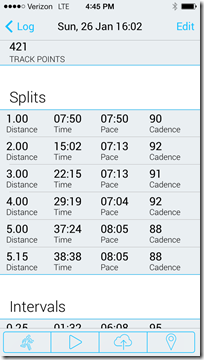 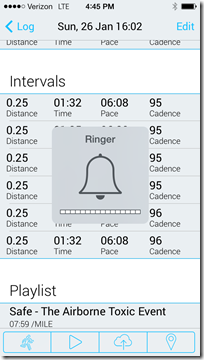 You can also set the app up to export your data to your favorite social media and workout tracking sites (Strava, Dailymile, Garmin Connect, etc.). All very easy and saves me a bunch of steps compared to when I use a GPS watch.

Another cool feature of the iSmoothRun app is the audio feedback it provides. I set it up to give me audible summaries after each mile (avg. pace, avg. cadence, total workout pace, etc.). It will also cue you when to start and stop intervals if you are doing and interval workout, which is handy when doing such workouts away from a track.

Pros of the Echo + iPhone vs. a GPS Watch

Cons of the Echo + iPhone vs. a GPS Watch

Wishes for the Magellan Echo

If you routinely run with an iPhone and don’t intend to change this habit, this might be the only watch you ever need. I’ve had an absolute blast with it, easily one of the cooler gadgets I’ve played with in a long time.

Big thumbs up for the Magellan Echo!

The Magellan Echo is available for purchase at Clever Training in the colors seen below (price without HRM = $149.99, price with HRM = $199.99. Clever Training specializes in fitness electronics, and has agreed to provide a 10% off discount to Runblogger readers on most products that they carry – just enter the code RunBlogXJT at checkout. Purchases support this site and help me to write reviews like this one. Your support is very much appreciated!

The Magellan Echo is also available at Amazon.com.