Home / Blog Posts / Marathon Strategy: Should I Push the Pace or Hold Back

Marathon Strategy: Should I Push the Pace or Hold Back

Yesterday I completed the first of two planned 20 mile training runs leading up to my running of the Vermont City Marathon (VCM) on May 24th. It was a beautiful day, the run went very well, and I was able to maintain close to an 8:30min/mile pace throughout. With the exception of the last two miles, my splits were fairly consistent as you can see from the table below: 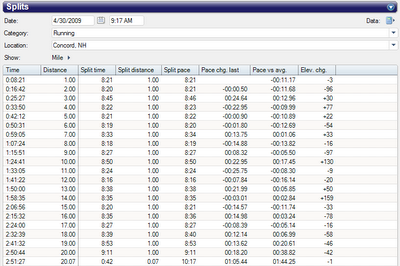 The graph below shows my moment-by-moment pace in blue, and the elevation profile in brown: 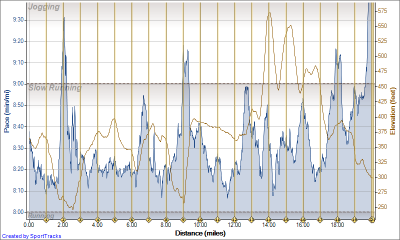 The dropoff in pace at mile 2 was due to hitting a tree-covered trail that messed up the GPS signal being received by my Garmin Forerunner 205. The dropoff in the last two miles was partly due to fatigue, but also due to the fact that I had to call my wife on the cell-phone to arrange a pick-up location, and then I ran the last 1/4 mile on a local track with my 5-year old son (alternating running forward and backward so he could keep up). The other notable thing about this run was that it was a pretty tough route – if you look at the brown tracing on the graph it gives you a feel for how hilly it is up here in New Hampshire, and I’ve come to terms with the fact that I like rolling hills much better than running on flat ground. Needless to say, I was encouraged by the run, and I’m hoping this bodes well for my marathon performance.

With another year of running under my belt, I feel stronger, and I plan to avoid some of the problems I encountered last year in my first running of the VCM. First, I have a better fueling plan – my water/energy gel/bottle thingy worked great yesterday, and I really like the Strawberry-Kiwi Carb-Boom Gel that I used. I only took two gels during last year’s VCM, and I plan to double or triple that this time around. Second, I absolutely will not run an all-out 5k four days before the marathon like I did last year. That race was a huge mistake, and not just because of any residual fatigue it might have contributed on marathon day. The bigger problem was that I set a 5k PR of 19:37, plugged that number into the Runner’s World Training Calculator, and got a predicted marathon finish time of 3:07:48. Dreams of earning a BQ in my first marathon entered my head, only to be shattered by my inexperience and lack of respect for the marathon distance, and I finished in 3:43:38. I learned how hard it is to predict marathon performance from a 5k time, and why this is a particularly bad idea for a first-timer.

So I’m at a point now where I have a decision to make regarding marathon strategy. My two 20 mile runs last year were at roughly the same pace as yesterday’s run, but I now have a stronger piece of predictive data. I ran the Manchester City Half-Marathon last Fall (a very hilly race) in just under 1:29:47. Plugging this time into the same RW Training Calculator predicts a marathon time of 3:07:12. This is almost the same as last years prediction based on the 5k, but now I’m going off of data from a much longer race, so I’d like to think that it has better predictive power. That being said, 3:07 is probably way above my capability given my relatively low training mileage (~25-30 miles per week). So what do I shoot for knowing that I’m in better shape than last year, but still probably not ready for a BQ attempt (I need a 3:14:59). Do I go for it anyway and leave it all out there, or do I run more conservatively, try to shave 10 minutes or so off my time, and save my BQ attempt for the Fall. What do you think?

Any and all comments are welcome and will be much appreciated.

You just finished reading Marathon Strategy: Should I Push the Pace or Hold Back! Consider leaving a comment!