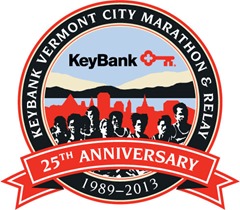 I’ll be running the Vermont City Marathon this Sunday, and I’m amazed at how calm I am given the amount of uncertainty that I’ve been experiencing lately. My past several weeks of training have included multiple lousy long runs, and I’ve had general sense of deadness in my legs that I’ve had a hard time shaking. There have been glimmers of hope as well – I ran an awesome 10 mile trail run on a cool day in Vermont last week, and it reminded me what a big role temperature is playing in the quality of my runs right now. When it’s warm I suffer, when its cool I feel good. I still have not acclimated well to running on the warmer days.

Fortunately, the current forecast for Burlington this Sunday is a high of 51 degrees with a 50% chance of rain. As long as the rain isn’t too heavy, this is pretty much ideal marathon weather for me. That combined with the fact that I had some pretty solid 18-20 mile runs earlier in this training cycle gives me hope that the race won’t be a total mess. I plan to approach it like I did Disney 2010 – don’t stress about pace, go easy and have fun in the first half, and pick it up in the second half if the legs feel ok. Disney 2010 was probably my most enjoyable marathon because I didn’t stress, I went in without any real plan (didn’t even look at the course map ahead of time), and I had a blast. It’s the only marathon I’ve ever run where I got progressively faster as the race went on. I know a PR is out of the question this weekend, so no point in running myself into the ground. I’ll be happy if I can finish the race without hitting the wall, always a challenge for me!

I’ve run 10 easy miles so far this week, with probably another 10 or so spread over the next three days. I’m as ready as I’m going to be at this point. My biggest dilemma right now is footwear. I still haven’t firmly settled on a shoe. The frontrunner is the Saucony Fastwitch 6, if for no other reason than my two best long runs this cycle have come in them. Darkhorses are the Saucony Kinvara 4 (did my final 20 miler in them and my feet were fine, the rest of my body not so much…), and a prototype Skechers GoBionic 2 I’ve been running in the past few weeks. The Skechers GoRun 2s were near the top of my list of possibilities for awhile, but I think they’re just a tad too soft for me for the distance. I’ll probably just bring all three pairs and choose at the last minute.

After Sunday I look forward to running for fun for a bit, and I’m seriously considering running the VT 50K in the Fall. I need a change from road marathons, and my run in VT last week reminded how much I love being in the woods. We’ll see!