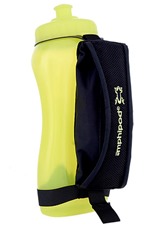 Boston 2011 was not a good marathon for me. I actually don’t remember much of the actual race, but what I do recall is having massive problems regulating my body temperature. I remember drinking a lot, and pouring more than a few cups of water over my head to cool down.

What I remember most vividly from Boston is crossing the finish line and feeling a wave of dizziness pass over me. I remember clutching the fence just past the finish line and thinking to myself that something wasn’t right. I saw a guy with an empty wheelchair not far away, stumbled over, and plopped down into the seat. I told him I felt like was going to pass out, and he promptly wheeled me to the medical tent.

My memories of the med tend are more lucid. The folks working in the med tent concluded pretty quickly that I was mildly hyponatremic. Fortunately, it seemed I was in better shape than some of those lying on beds around me, and I slowly began to feel better. The docs made me drink a few cups of super salty bouillon, and after about a half hour it was clear that I was going to be fine, and I was allowed to check out. I was lucky, but it was an experience that I don’t want to repeat again anytime soon.

Normally I’m a guy who likes to turn to the research in a situation like this – just how much should I be drinking during an extended run or in a race? However, I’ve also learned that though research can provide helpful guidelines, it’s not always great at identifying exactly what is best for me as an individual. As such, I’ve been playing a bit lately with hydration on my long runs with the goal of trying to figure out just how much I need to drink. Turns out that it seems I need a lot less than I thought.

So far this training cycle I have yet to carry water with me on any of my long runs. I usually bring along a few dollars in case I feel the need to stop at a gas station for a drink, but so far I think I’ve only felt the need to do this once on my first 16 miler. On Sunday I left the house for 18 miles, and didn’t drink anything until I returned home – I felt strong throughout. In fact, I ran the second half of the run considerably faster than the first half. I passed a gas station twice, and neither time did I feel a need to stop.

Now, I should say that it was cool (high 40’s, low 50’s F) and overcast when I ran on Sunday. Had it been warm and sunny, I would have definitely carried a handheld water bottle, and I probably would have stopped at the gas station at least once for a refill. I’ve run long in 90 degree summer heat enough times to know that attempting to do so without any fluids would be stupid – if I plan to go for over an hour in summer I always bring a handheld bottle along and sometimes I’ll even wear a hydration pack. I also always take fluids in marathons since the distance and pace warrant it. But, under the right conditions I seem to do just fine with minimal water during my long runs.

I guess the point of this ramble is that we are so often inundated by the message that we need to hydrate extensively when we run, but this isn’t always a good thing. The dangers of overhydration have been emphasized recently in books like Tim Noakes’ “Waterlogged” (have not read it yet), and it’s a lesson I learned firsthand in Boston. My goal next month in Vermont is to run strong, but not overdo the hydration. I’d much rather spend the immediate aftermath of the race eating Ben & Jerry’s ice cream in the sun than lying in a cot in a med tent.