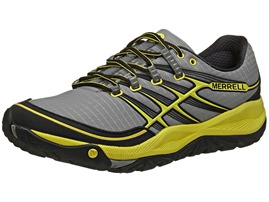 I first saw the Merrell AllOut Rush at a meeting with the brand in Spring 2013. They were introducing the new AllOut line, and the emphasis was on added cushion while retaining some of the features that people like about the Merrell Barefoot/M-Connect collections. I was intrigued by the shoes since I’ve always felt that shoes like the Merrell Bare Access we just a bit too firm for my road running taste – add a bit of softer cushion and they’d be a great match for me.

I received the AllOut Rush last winter (Disclosure: these were media samples provided free of charge by Merrell), and it’s taken me a long time to get to this review. The main reason is because my experience with the shoes has been rather mixed. However, I believe in writing honest reviews, so I’m going to lay out my feelings on them here. I’d also be curious to hear about your experience with the Rush if you’ve tried them.

Most of my initial runs in the AllOut Rush were during last winter, and so were on a mix of packed snow, ice, and intermittent bare asphalt. Though traction was good, the shoes just did not feel right on my feet. My expectation was a cushier ride given the added sole stack relative to other Merrell models I have run in, but the shoes felt surprisingly firm under all conditions, and particularly harsh on the stretches of road that I had to cover (and in fairness tom Merrell, this is not intended as a road shoe). I stopped running in them for a long time as a result. Last month I spent two weeks in northern Vermont and decided to take the shoes with me for a second chance – my feelings remained pretty similar, too firm a running shoe for my taste even on dirt roads and trails. It’s worth noting that Thomas Neuberger over at Believe in the Run had similar feelings about the ride of this shoe. (However, as I’ll get to below, I have found them to be great casual and light hiking shoes.)

While on the subject of cushion, there is some discrepancy between what Merrell reports for stack height (24.5mm heel, 18.5mm forefoot) vs. what Running Warehouse reports (28mm heel, 17mm forefoot). I just measured my pair and got 23mm heel, 16mm forefoot, but they have been broken in so my numbers are likely closer to Merrell’s numbers if it were a fresh shoe.

One thing to note about the stack height numbers in this shoe, and I think this influences the ride considerably, is that 8.5mm of the stack height is attributable to the luggy, rubber outsole. Simply stated, there is a lot of rubber on the bottom of this shoe. Much of the outsole is also continuous

– there are no breaks for flex grooves, so it makes it hard to compress the midsole in any given spot. I’m wondering if this helps to contribute to the firm-feeling ride. Merrell did also include firmer midsole plates under the heel and forefoot (see photo at right) and this might further add to the firm feel.

One of the issues that arises with the extensive outsole on this shoe is that it affects the way the shoe is balanced from a weight standpoint. Running Warehouse reports a weight of 9.1oz in men’s size 9 for the Rush, so it’s not a terribly heavy shoe. However, much of this weight is localized in the outsole, so it feels heavy under the foot. If I had to recommend a change for future iterations of the Rush it would be to maybe add some flex grooves to the outsole, or at least break it up in some way to reduce weight and improve the ability to compress the midsole cushion. I’m curious to try the Merrell AllOut Flash since it seems to incorporate many of these wishes (though it is a more road-oriented shoe). 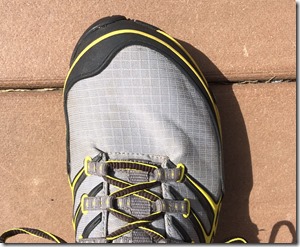 One final, minor complaint about the Rush before we get to the good stuff. When my buddy Nate got these shoes he notice that the forefoot upper tends to pucker when you cinch down the laces at the bottom of the lace row. He has narrower feet than me so the puckering was quite apparent. I have noticed this as well but on a much smaller scale and it has not interfered with comfort in my case (you can see the puckering in the photo to the left).

Given what I’ve written so far it might sound like the AllOut Rush was a total disaster for me. For running, yes, I’d say it has not been a good match. However, I have used the Rush extensively as a casual shoe and for light hiking, and for both purposes it has been excellent (and it’s also a great looking shoe from a design standpoint). My sense is really that the Rush should have been marketed more as a light hiker than as a trail running shoe because it excels in this area. I’ve done multiple short hikes in them, and the firmness ceases to be an issue. Furthermore, the extensive outsole becomes a plus for protection and grip on the trail. The weight balance also feels more boot-like than running-shoe like and so the Rush feels more at home in the hiking environment.

Another thing I really like about the Rush is the fit. The shoe fits like a typical Merrell Barefoot shoe (e.g., like the Bare Access or Trail Glove) so it has a nice, snug fit in the heel through forefoot and a great, roomy toebox. I particularly love that the Merrell toebox is accommodating near the big toe – you can see in the photo below how the forefoot does not curve inward abruptly in this area as it does in many other shoes. This allows for solid toe splay, and makes the shoes very comfortable for all-day wear.

The upper of the Rush is minimally structured but is made of a relatively thick material. It does a good job of keeping the foot warm, and makes this a great all-around casual cool-weather shoe. And in winter the lugs make it great for walks in the snow and over crusty ice.

The Merrell AllOut Rush did not work out well for me as a running shoe – it felt too firm underfoot and I felt like the weight-balance was more boot-like than running shoe-like. However, due to its comfortable fit and performance as a light hiker and winter casual shoe, the Rush will likely remain on my shoe rack for the foreseeable future. If you like a firm feeling, luggy trail shoe with a fair amount of stack height, then the Merrell AllOut Rush might be worth a shot (we all have different preference!).

The Merrell AllOut Rush is available for purchase in the US from Running Warehouse, in multiple colorways at Zappos, and at Amazon.com. Outside of the US it can be purchased at Amazon UK or one of the many Merrell country-specific websites (e.g. Merrell UK here, Merrell Canada here). Purchases from these retailers provide a small commission to this site and help me to keep pumping out reviews like this one – your support is much appreciated!