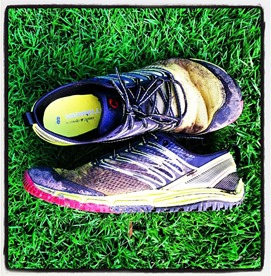 A few weeks ago I had the opportunity to fly out to Portland, Oregon to attend an insights meeting with Merrell Footwear. Merrell has organized a meeting like this each year for the past 3 years, and they basically invite a collection of individuals throughout the running footwear world to solicit feedback on trends, marketing directions, etc. It’s always a fun event, and it’s a great way to get to know the people behind the brand (they’re a great bunch, and a blast to hang out with!).

At each meeting Merrell typically provides attendees with a pair of one of their new shoes, and this year each of us received a pair of the Merrell Ascend Glove to try out. I’ve now put in about 25 miles on the shoes, mostly on trails, and am ready to render my verdict.

To allay any fears of bias that may taint my review given my relationship with Merrell, I will say that I have not been crazy about some of their recent offerings. I think the Road Glove 2 is a step back from the original, and the Proterra Sport is a nice shoe, but the sole is too stiff for me and as a result my heels got torn up on a hike in the shoes. I like the Bare Access 2, but it’s too firm for me to use it for long distances on the road. In contrast, the Ascend Glove hit a sweep spot for me, and I’ve been absolutely loving it so far.

I’ve seen the Ascend Glove described as the Trail Glove with more cushion and a luggier sole, or as the Bare Access with a rock plate and tread. Both are reasonably accurate descriptions – think of it as a hybrid of the two shoes. 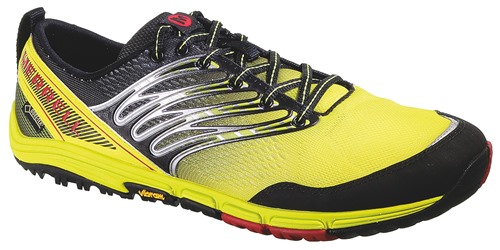 The fit of the Ascend Glove is classic Merrell – wide in the forefoot, glove-like through the midfoot and heel. Of note is the fact that though there is arch support, it does not feel as intrusive to me as in some of the other Merrell Barefoot shoes. The interior is suitable for sockless running, though as is typical for me with Merrell Barefoot shoes the lack of cushion around the ankle collar means that I get skin-ripping abrasion near my Achilles insertion. Thin socks solve this problem. 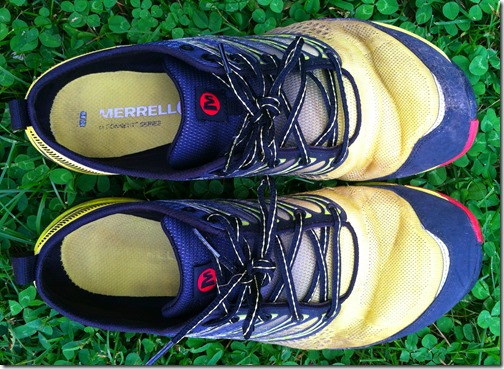 The upper is composed of a double-layer of synthetic mesh – the inner layer has a tighter weave to keep debris out, and the outer layer is more open. The result is a shoe that is highly breathable and that sheds water really well. I did 5 miles on trails with my friend Nate a bit over a week ago and he took me through quite a bit of mud and water. The Ascends let the water flow in, but it flows right back out without issue. Some silt got into the shoes through the weave, but mostly very fine stuff and I didn’t have any issues or discomfort.

The lacing system on the Ascend Gloves uses traditional eyelets rather than the Omni-Fit system featured on the Trail Glove. This will disappoint some, but works fine for me.

One final comment about the Ascend Glove upper has nothing to do with function or performance, but the shoe looks fantastic, probably my favorite Merrell shoe in terms of appearance since the original Trail Glove.

The sole of the Ascend Glove is zero drop with a stack-height of 10.5mm (6mm midsole cushion, the rest is the Vibram rubber outsole). This is slightly less midsole than the Bare Access 2, and as a result the Ascend Glove feels more flexible to me.

The sole incorporates a rock plate in both the forefoot and heel. I’ve run over quite a bit of pointy crushed rock in these shoes and will say that they provide better protection than a thinner-soled minimal shoe, but you will feel rocks if you take a direct hit. That being said, I have not experienced any discomfort running on crushed rock sections of trail. They provide better protection than a shoe like the New Balance MT10, and comparable protection to the Inov-8 Trailroc 235 or Altra Superior.

One of the things I like about the sole is that it is full-contact – no cutout under the arch as in some other Merrell Barefoot shoes. This makes for a very smooth ride. The outsole is luggier than the the Trail Glove, but only slightly so. This is not a mud shoe like an Inov-8 X-Talon, but I have not had traction issues on any of the trails I have run (though admittedly I have not tackled thick mud). The benefit of the flat lug design is that the shoe handles well on roads as well as trails, making it a solid hybrid shoe. The ride on roads is firm, and feels great on softer surfaces.

As I mentioned at the outset I’ve put in about 25 miles in the Ascend Gloves. They are similar enough to other Merrell shoes that I feel this is sufficient to get a good handle on them, and the experience so far has been very positive. My first run in them was a quick 3-mile trail run out in Oregon, and my immediate reaction was that they were a lot of fun to run in, especially downhill. Very reminiscent of the Inov-8 Trailroc 235. I’ve put in another 10-15 trail miles back in NH, along with 5-10 on the road, and the shoes have handled just about everything well. I even took them along on a camping trip last week and wore them almost exclusively out and about, including a full day at Santa’s Village. They are super comfortable as a casual shoe, and I love their versatility.

If you’re looking for a zero-drop trail shoe with a rock-plate and a wide toebox, the Merrell Ascend Glove is definitely a shoe to consider. As mentioned a few times, closest competitors would be the Inov-8 Trailroc 235 and Altra Superior, and maybe the New Balance MT10 (though it lacks a rock plate). The Ascend Glove holds is own with all of these, and in my opinion is the best looking of the bunch (because we all know that’s the reason most people choose a shoe!).

The Merrell Ascend Glove can be purchased at Amazon and Zappos.

The folks at Merrell were kind enough to offer up six pairs of Ascend Gloves for a giveaway – 3 for the guys and 3 for the ladies. To enter, simply follow the instructions in the Rafflecopter widget below: