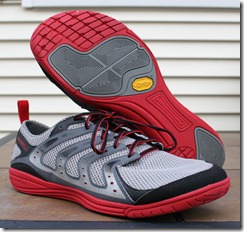 This afternoon I ran 14.2 miles in the Merrell Bare Access shoes. This was the longest run I’ve done since the 2011 Boston Marathon, and the first run longer than half-marathon distance that I’ve done in a zero drop shoe since probably 2010. I’m happy to report that the run went very well, and the shoes performed spectacularly!

The Bare Access is Merrell’s contribution to the zero-drop, cushioned shoe niche, where it competes with shoes like the Altra Instinct, New Balance MR00, Saucony Hattori, and the soon to be released Skechers Go Bionic, Saucony Virrata, and Brooks Pure Drift. For me, these shoes nail a sweet spot by being flat, but also by providing enough cushion to take the edge off on a longish run. Along with 4-5 mm drop cushioned shoes, shoes in this category find their way onto my feet for most of my miles these days, and the Bare Access is one that has been on my feet as much as any other shoe over the past several months.

The Bare Access scores big points with me for its fit. It’s one of those shoes that feels as if it were made just for my foot. Snug in the heel and midfoot (but not overly narrow in the midfoot like the NB MR00), it opens up into an ample forefoot that provides plenty of room for my metatarsals and toes to spread out. It does have a bit of contour under the arch, but this doesn’t bother me at all, and it feels less prominent than in the Merrell Road Glove. The Bare Access is a ridiculously comfortable shoe, and it’s one of the first that I reach for when choosing something for all-day use (if you’re looking for a zero drop shoe for casual, non-running use, this is a great choice) . 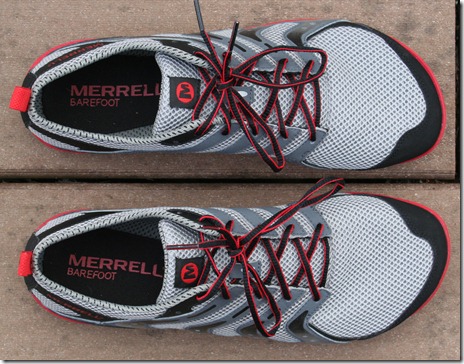 The upper of the Bare Access is well-made and seems to be very durable. The mesh upper allows the shoes to breathe well, and internally it feels great on a bare foot. The footbed is non-removable, but there are no raised edges where it is stitched in to cause blister issues (a problem for me in some shoes with integrated footbeds). Unfortunately though, sockless running is not possible for me in this shoe because like many shoes in the Merrell Barefoot line (e.g., Trail, Sonic, and Road Gloves), the ankle collar digs into the skin behind my Achilles tendon in a fierce way – damage has been done on the few occasions I’ve attempted to run in the Bare Access without socks. Fortunately, socks do take care of the problem. If I had one suggestion for Merrell (and this applies to most shoes in the Barefoot line), it would be to add some cushion inside the ankle collar, particularly behind the Achilles.

The Bare Access also scores points with me by being very lightweight. Running Warehouse lists it at 5.7 oz in size 9, and the shoe feels very light in hand.

The midsole is 13mm thick in both heel and forefoot, and there are Vibram rubber patches on the heel and across the forefoot (see photo above). Interestingly, after 40+ miles of running and a substantial amount of casual use, I see virtually no wear on the Vibram rubber patches (see photo below). The lack of any wear on the heel suggests that I’m landing midfoot-forefoot when I run in these shoes – in shoes with more heel lift like the Saucony Guide 5 or Adidas Adios 2 I still tend to scuff the heels up, though not nearly as much as a I used to when I first started running. I still firmly believe that heel-toe drop is a major factor in determining how my foot contacts the ground when I run.

The one spot where I am seeing considerable scuffing is on the forefoot in front of the Vibram rubber patches. I’ve seen this reported by a few people, but I don’t think it’s a significant problem. The EVA used to make the midsole seems to scuff really easily, and the surface gets kind of stringy/fuzzy. But, it seems more like surface scuff only and it does not appear to be wearing down excessively – it’s kind of hard to describe in words. One other note about the sole – I have seen a small amount of peeling of the Vibram forefoot patch away from the midsole – it has not progressed beyond just the front edge under the big toe coming loose, and it should be an easy fix with a bit of Loctite vinyl/fabric glue. 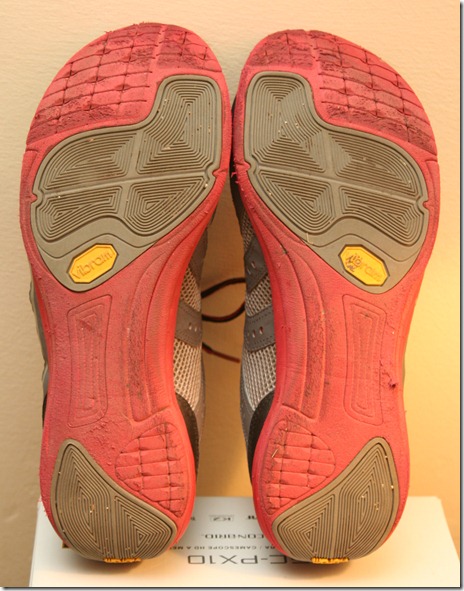 On the run, the sole of the Bare Access is quite firm, and it is a bit stiff from front to back (it does flex quite well under the forefoot though). I can imagine the shoe would be a bit slappy if you are a heel striker in it, but this has not caused me any problems. I actually found them very comfortable on my 14 miler today, and my feet and legs felt great (happily, calf soreness from running zero drop seems to be a thing of the past for me).

So how does the Bare Access stack up compared to other zero-drop, cushioned shoes? For me, it’s a better fit through the midfoot when compared to the New Balance Minimus Road MR00 (and lacks that lateral sole bump in the MR00 – if you own that shoe you know what I mean), and it’s significantly lighter than the Altra Instinct. As such, if I had to choose one of the three it would probably be the Bare Access. My other favorite in the zero-drop, cushioned niche is the Skechers Go Bionic – it’s the most flexible of any of the shoes mentioned and fits me great, but has a much softer feel than the others, so that’s a differentiator. If you like a firmer sole in a zero drop shoe, the Bare Access is a great choice.

All-in-all, the Merrell Bare Access is a fine choice if you’re looking for a zero-drop, cushioned shoe with a roomy forefoot – it’s a perfect pick for someone looking to try zero drop for the first time. For me it’s a very versatile shoe that I use for both running and all-day casual wear, and for that reason it will likely stay in my primary shoe rack and remain part of my regular footwear rotation.