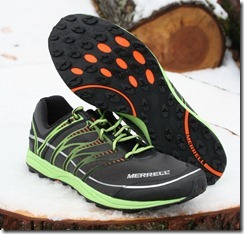 Merrell made quite a splash in 2011 at the minimal end of the running shoe spectrum with its Merrell Barefoot lineup. The Merrell Trail Glove is a fantastic shoe, and remains one of my personal favorites, and they have a selection of zero drop shoes more suitable for road running coming out in the next few months (the barefoot-style Road Glove and the zero drop but cushioned Bare Access). Merrell has now begun to diversify a bit into the lightweight trail running category with its introduction of the Merrell Mix Master, a 4mm drop, cushioned trail shoe.

To be clear at the outset, the Mix Master is not part of the Merrell Barefoot lineup. It is intended as a lightweight trail running shoe to compete with the likes of the Saucony Peregrine, Brooks Pure Grit, and the forthcoming New Balance MT110. I received a pair of the Mix Master from Merrell last week (disclosure: these shoes are a review pair provided free of charge from the manufacturer), and thought I’d share my first impressions after spending a day in them and taking them out on a 5 mile trail run.

My first impression upon putting the Mix Master on was that it felt a bit narrower than the Trail Glove. However, after spending a day in them, I’ve concluded that though the fit is slightly different, they are at least as roomy on my feet as the Trail Gloves. Measuring across the forefoot puts them in the same league as the New Balance MT101 and Minimus Trail MT10 – thus, there should be plenty of space up front for most people.

Although reasonably well cushioned (though not as soft as the Saucony Peregrine, with which it shares the most similarity among trail shoes that I have worn), the sole of the Mix Master is surprisingly flexible. The outsole is studded with oval shaped lugs, and there is a rock plate in the forefoot (you can see it in orange in the photo above). Because the lugs are flat and do not protrude too much, this shoe can be used on the road, though I would not recommend it as a full-time road shoe. On my five mile run I hit quite a bit of varied terrain, including a rocky spillway, gravel, a bit of asphalt, and quite a long stretch of trail covered by a thin layer of ice and snow. Traction was sufficient on most surfaces, but might not be as good in mud or on very slick surfaces. Protection from rocks was excellent. 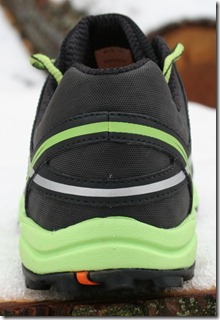 The upper of the Mix Master is a bit more substantial than that on a shoe like the Trail Glove, particularly in the rear part of the shoe. There is a stiff heel counter, and the collar around the ankle is cushioned (I prefer the cushioning here as the ankle collar on the Trail Glove digs into the skin over my Achilles if I run sockless in them). The upper of the rest of the shoe is more minimal – it consists of an internal layer of open mesh and an outer layer of thin, highly breathable monofilament mesh. This combination is actually very similar to that of the original Saucony Kinvara, though the outer layer of mesh is more similar to that found on the Kinvara 2.

In terms of weight, my pair come in at 9.3oz in size 10, though removing the insole knocks that down to 8.6. This places the Mix Master at the upper end of the lightweight trail shoe spectrum.

This review is obviously very preliminary as I have only had the chance to run in this shoe once, so I’ll update as needed as I get more miles in. I see the Mix Master as Merrell’s first attempt to venture beyond their Barefoot collection into lightweight trail running shoes. This makes sense from a business standpoint as lightweight running shoes are selling like crazy these days, and they can serve as gateway shoes for those interested in dropping further down the minimal scale. I personally still use a shoe with a bit more substance for long runs and races (not that I’ve done many lately!), so a shoe like the Mix Master has a definite place in my rotation.

The Mix Master has some stiff competition in the lightweight, 4mm drop trail shoe niche, with competitors like the Saucony Peregrine, Brooks Pure Grit, La Sportiva X-Country, Salomon Fellcross, and soon-to-arrive New Balance MT110. Of those just mentioned, I have only run in the Peregrine and the MT110, so my ability to compare is limited. However, I would say that the Mix Master is a bit roomier, more flexible, and not quite as soft as the Peregrine, and I have had some issues with the sole of the MT110. Regarding the latter, I’ll address the issue in more detail when I write up my review of the MT110, but in short my pair is thicker laterally than medially, and a 10 mile trail run in them triggered a mild case of posterior tibial tendonitis – trying to find out more about whether this is a design element or if I just got a lemon. Regardless, the Mix Master should compete well with both of these shoes, and with a bit more time I should have a better feel for how I would rank them – stay tuned!