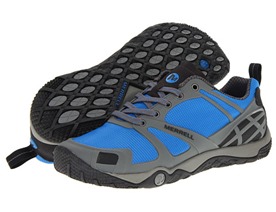 There was a time when I used to hike a lot. I spent a summer working in Great Smoky Mountains National Park and got to the point where I could almost run up mountains with a frame pack filled with wooden boards on my back (I worked on a salamander survey crew and we used boards to create hiding spots/homes for them). I appreciated the value of a good hiking boot, particularly one that was waterproof, and had a pair of Vasques that I absolutely loved (don’t recall the model, didn’t care much in those days). I brought that same pair of boots on a cross-country trip with my then girlfriend (now wife) as we traveled across the US and Canada for six weeks, hiking in about 15 national parks along the way.

Then I had kids.

Since my oldest son was born back in 2003, long hikes have been few and far between. We do manage a few every summer, and after my Vasques finally bit the bucket I bought a pair of Garmont boots that wound up tearing the heck out of my heels every time I wore them. I’ll never forget the bloody mess they created on a hike from the Von Trapp Lodge in Stowe, VT. I haven’t worn them since.

After becoming a runner, and then discovering more minimal shoes, I’ve grown accustomed to hiking mostly in lightweight trail running shoes. They keep me close to the ground, rock plates handle most anything I typically encounter on a trail just fine, and I’m generally not doing anything too long or intense so super rugged boots are usually unnecessary.

I was excited last Fall when I was at Merrell HQ in Michigan and they told me about how they were trying to re-engineer the hiking boot with lessons learned from their Merrell Barefoot line. They introduced me to the Proterra Sport and the Proterra Mid Sport. Both are considered “speed-hiking” shoes, which are kind of a cross between a hiking boot and a trail running shoe like the Merrell Mix Master. I was intrigued by the concept, and received pairs of each to try out earlier this year.

The Proterra Sport and Proterra Mid Sport are similar shoes, with the Mid having a higher ankle collar. I’ve spent most of my time so far in the lower cut Proterra Sport.

Compared to most shoes that I wear, the Proterra Sport feels like a tank – my pair in size 10 weigh in at 13.8 oz on my scale. While walking in them I feel like I can crush anything in my path, much like Godzilla smashing down buildings. I suppose this is a good thing if you want protection on the trail. The rigid sole also feels super stable – it provides a nice, wide base, and at 4mm drop it doesn’t feel liking I’m wearing a pair of high-heeled shoes. It also has an inverted lug design that they were really excited about when unveiling the shoe last fall – I can’t say whether or not this is better or worse than a traditional lugged sole, just different.

In terms of fit, the Proterra is a super comfortable shoe, and a nice departure from many other hiking boots I have worn. The forefoot is wide and squared off – it fits kind of like a Keen shoe. Plenty of room to move the toes around. Since the upper is a synthetic mesh it breathes well, thought it is not waterproof (I did wear it a bunch this winter and it handles snow pretty well without getting soaked).

In most respects Merrell has created a hiking shoe that pulls some of the best aspects of minimalism into the hiking shoe niche. The wide forefoot and 4mm drop sole in particular are great. Where I have run into problems is with the rigidity of the sole.

There was apparently some debate about whether to include a shank in the sole. My knowledge of boot design is rudimentary relative to my knowledge of running shoe design, but my understanding is that a shank functions to increase rigidity and supports the sole under the arch. Shanks are common in work boots and hiking boots – for more on the function of a shank see this article from the Outside Gear Guy. The “molded TPU arch shank” in the Proterra may be part of my problem with the shoe.

My issues with the Proterra manifested on a 7 mile hike last week in Vermont. My wife and I were climbing a rocky switchback trail, and I started to feel a telltale abrasion on the backs of my heels. Blisters were in the works, and we were only a mile and a half into the hike. The problem was obvious – the rigid sole doesn’t flex well, and every time I pushed off my forefoot the back of the shoe levered down, then when I took the next step onto my heel the heel pushed back up. The result was rubbing and abrasion at the back of the heel.

Given that I’m running a marathon in a week, the last thing I needed was bloody, open sores over my Achilles insertion point on each foot. I went into panic mode and tried tightening the lacing to hold the shoe in place with a better lockdown. That actually made things worse. I went the other direction and loosed them up as much as I could. The heels still continued to slide up and down relative to my skin, but there was enough space now that the abrasion stopped. I kept them really loose for the remainder of the hike and managed ok. I think this is exactly the same problem I had with the Garmont boots I used to have. Rigid soles don’t work well for me, and I won’t tolerate blood and pain to break a shoe in.

This phenomenon is not unique to hiking boots. A running shoe with an inflexible sole can cause the same problem. The original Altra Lone Peak was criticized for this, and early releases of the Altra Torin (which has a thick sole) were missing a set of lace holes which prevented a good lockdown of the heel. I value flexibility greatly as it helps me avoid heel abrasion, and it’s a problem I have rarely had since going minimal.

It might be the case that a good break-in period would increase the flex in the sole and help me avoid this problem, but I’m hesitant to risk blistering on my heels since it makes both walking and running miserable for several weeks (if you’ve got a lot of miles on the Proterra, I ‘d love to hear about whether flexibility increases as they break in). I could also continue to wear them really loose, but that might not be the best option for someone wanting stability in a hiking shoe.

My advice to Merrell would be to keep most everything about the shoe the same, but remove the shank from the sole and attempt to increase flexibility. The heel counter is also not well padded, which increases abrasion, so adding a bit more padding behind the heel might be of benefit.

I like what Merrell is trying to do with the Proterra, but for me it remains just a bit off from being a shoe I’d choose for a long hike. I need to give the Proterra Sport Mid a try and see if the higher ankle collar locks my foot down a bit better to prevent the abrasion. On the positive side for Merrell, my current preferred hiking shoe if I needed something a bit more than a trail running shoe would be the Merrell Mix Master Mid. It’s basically a waterproof, beefed up version of the Mix Master 2 trail running shoe, and it shares its flexible sole and rock-plate. There is a new version called the Mix Master Mid Tuff that I have not tried yet, and the original Mix Master Mid is on clearance at 6pm right now for $76.99 (as of May 18, 2013).

The Merrell Proterra Sport can be purchased at Amazon.com and Zappos.

Below are available color options for the men’s Proterra Sport at Zappos: