There are some running products that warrant a long review (e.g., shoes, electronics), and there are others that can be adequately critiqued in just a few paragraphs (most apparel, nutrition products, etc.). Over the past several months Nate and I have received a number of products to try out that fit into the latter category. Rather than post a bunch of really short reviews, we figured it would be more efficient to do a mini-review roundup of products we’ve tried and liked. Here goes!

First, some mini reviews from Nate:

RunGuard Anti-Chafe Stick – One of the hardest things about running Ultramarathons is chafing.  On my first 100 I started chafing at mile 9.  It was the single hardest thing to deal with for the remaining 91 miles.  Like most runners, I have used Bodyglide for years.  I have also used Toms Blister Shield, Vasoline, Bagbalm and other products, but have still suffered with chafing.  I get it under my armpits and in my crotch (sorry..) where the seams of my legs meet my man-bits.  Its not fun…unless you like the idea of feeling like somebody attacked you with a cheese grater while trying to run for hours and hours.

Run Guard is made by the company that makes nip-guards, which are special “bandaids” for your nipples. The anti-chafe stick comes in two types, original and sensitive.  I absolutely love the sensitive type. I have had zero problems while using it.  It stays on longer than Bodyglide and has a nice smooth feel that doesn’t get sticky. It is now a permanent fixture in my run kit. Give it a try! You can read about it and order it at their website, www.runguards.com. RunGuard is also available for sale at Amazon.com.

Energy Bits – If you’re a runner and use Twitter, chances are you see lots of posts from Energy Bits and EB users. Energy bits are little pill-like tabs of Spirulina algae, a great source of protein. As with many supplements, there are users who swear that they are the second coming of the Messiah.

I received a free trial of about 50 “bits” and used them on a long run.  Feeling like I actually got a bit of a boost from them, I bought a full bag with a discount that was extended by them. I have used them several times and honestly can’t tell any difference when I use them. There is no doubt in my mind that they are a healthy way to get plant based protein, I just don’t seem to feel any benefit from using them and can’t justify the relatively steep price. Others swear by them. Ask them for a free trial and make your own conclusions. Whether they work, or produce a placebo effect really doesn’t matter if you feel that they make you faster and stronger. That’s a good enough reason to use them for most. For more, visit www.energybits.com.

Next, some mini-reviews from Pete: 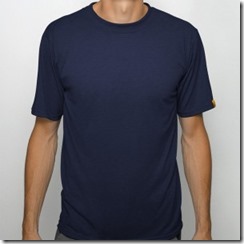 Sport Science Smarter T-Shirt – There was a time before I became a runner that I almost exclusively wore cotton T-shirts. However, it doesn’t take long for a new runner to realize that cotton shirts are just a really bad idea. They get soaked, and stay soaked when you run. They chafe. Bloody nipples may result.

I’ve since amassed an enormous collection of tech fabric shirts, most obtained at races or Target (yes, Target is my main source of running apparel!). I’m a big fan of tech fabric, but my cats are not. They love lying on fresh laundry, and when they do that cat paw thing that cats do to get comfy, my tech shirts start sprouting strings and develop runs that can’t be fixed. Velcro is also not fond of tech shirts. I could just put my laundry away quickly, but as my wife will attest that’s not really a likely course of action.

Needless to say, I’m open to trying out shirts less susceptible to feline and velcro damage. Sport Science offered to send me one of their Smarter Basics shirts and I’ve now worn it out on several runs. The shirt is a blend of polyester and cotton, so it looks more like a typical cotton T-shirt than typical tech fabric shirts do. I like the shirt because I can wear it casually without looking like I’m about to head over to the track (which, on a given day, might actually be the case).

It’s comfortable, has a generous fit, and is a bit warmer than a typical tech shirt. On the negative side, it does retain water more than a tech shirt, but not nearly as bad as a cotton T-shirt. Think of it as a hybrid between the two. For me it’s a shirt that works well in cooler weather, probably not one I’d take out on a run in the heat of summer. 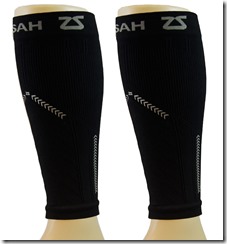 Zensah Reflect Calf Sleeves – I generally wear calf sleeves when I race if for no other reason that they feel good. I don’t know if they provide any benefit during the race, nor do I have a good sense of whether they help speed recovery (just being honest!). I wear them because I like them, and that’s a good enough reason for me.

My preferred brand for calf sleeves is Zensah. Their sleeves are made of a slightly thicker fabric than others I have tried, and I like the amount of compression that they provide. Zensah recently sent me a pair of their new “Reflect” calf sleeves, and I wore them in my marathon last weekend – no issues, though my calves were sore as heck the next day so they clearly didn’t prevent calf soreness. These sleeves are pretty much the same as the traditional Zensah sleeves I have, with the addition of some reflective markings. I have not run in the dark lately, but I suppose any added bit of reflective material can be of benefit when running at night. Very happy with these sleeves. For more information, visit http://www.zensah.com. Zensah sleeves are also available for sale at Amazon.com. 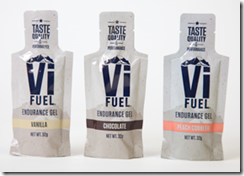 VFuel Gels – My friends at Running Warehouse recently put me in touch with VFuel, a manufacturer of energy gels that I hadn’t heard of before. VFuel sent me samples of their three gel flavors: chocolate, vanilla, and peach cobbler. I tend to prefer fruity gel flavors, so I used the peach cobbler gels in my final few long runs leading up to the Vermont City Marathon last weekend. I also used three of the peach cobbler VFuel pouches in the race (mixed with a bit of water in a flask).

VFuel emphasizes that they use natural flavoring sources – things like actual cocoa powder in the chocolate gel, real vanilla in the vanilla gel, etc. (not sure if there is actual peach cobbler in the peach cobbler gel). They also tout increased digestibility since they use a mix of maltodextrin and dextrose rather than maltodextrin and fructose as the primary carb source in the gel.

I find it really hard to review sports nutrition products since it’s tough to really nail down any befit of one over any other product. So, what I will say is that I like the taste of the peach cobbler VFuel, and it’s a bit thinner than other gels I’ve used which makes it easier to take in if you eat it right from the pouch. I had zero stomach issues in the marathon last weekend, but my stomach doesn’t tend to give me trouble often on the run. So, maybe it’s best to say that I have nothing negative to say about VFuel, which is probably the highest praise I could give to a gel. I rarely use gels on training runs, and given that they sent me two boxes of each flavor, I’ll probably be using it in every long race I run in the foreseeable future – no need to buy other gels at the moment!

For more, visit http://vfuel.com/. VFuel gels are also available for purchase at Running Warehouse – they published a group review of VFuel by their team here. 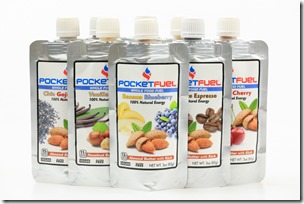 PocketFuel sent me some samples of their nut butter pouches last year, and I had forgotten I had them until I was packing for my recent marathon. I brought one along with me to Vermont to eat after the race, and it reminded how good they are (and yes, turns out year old PocketFuel is still very edible).

Pocket Fuel comes in a number of flavors, but the base ingredient of each is one of several types of nut butter. I think all of the pouches they sent me were almond butter based. The nut butter is mixed with various other whole foods to produce the various flavors – it’s all natural, no chemical additives. For example, the ingredients list for the Chia Goji & Honey pouch I have in front of me includes the following:

The 3oz pouches I have boast 15g of protein, and they taste delicious. The chocolate espresso flavor is ridiculously good! Beware though, each 3oz pouch is 400+ calories, so you’re not going to want to down several in a day unless you’re running really long and need the fuel (they do make small sized pouches as well). I use them mostly as a snack, eating a pouch over the course of a few days. It might be kind of hard to eat Pocket Fuel in a fast-moving event like a marathon since it comes out really thick, but I could see this as an option for long hikes, or maybe an ultra where you don’t intend to run the entire distance. PocketFuel is not cheap – individual 3oz pouches cost $4.00, and each 1.8oz pouch costs $2.75.

For more information, visit http://pocketfuelnaturals.com/. PocketFuel can also be purchased at Amazon.com.