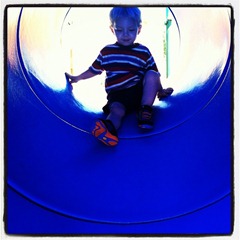 I get a lot of questions about minimalist footwear options for kids, and it’s a topic that I’m very passionate about. I feel strongly that kids should be in shoes that respect natural foot shape and allow for normal function and development. With that in mind, I thought it might be worthwhile to write a post listing the shoes that I put on the feet of my own kids with a bit of commentary on each.

I have three children: a 2 year-old boy (that’s him in the photo above sporting his Merrell Flux Gloves), a 7 year-old girl, and an 8 year-old boy. Given a choice, they prefer to be barefoot most of the time, and this is a habit that I encourage. But, there are times when shoes are needed, so this list presents the shoes that they wear most often.

I’ll start with the shoe that all three of my kid’s absolutely love and that would be their preferred option 99% of the time if allowed to choose on their own:

I can already hear the gasps of horror, but the venerable Croc

is a favorite in my household. It’s cheap, practically indestructible, and easy to put on and take off (minimal parental assistance needed) – the benefit of this is it means they are more likely to just pull them off and go barefoot. Although it is well-cushioned and has a bit of heel lift, I’m willing to accept that given the fact that they are incredibly roomy and will not scrunch up their toes. Crocs may be the least restrictive option available for a kid’s foot short of a loose fitting moccasin.

Now, because my older kids are in elementary school and gym class will not allow Crocs, they have more traditional looking shoes that they wear as well. For my 8 year-old boy, his current “running” shoe is the Merrell Barefoot Flux Glove: 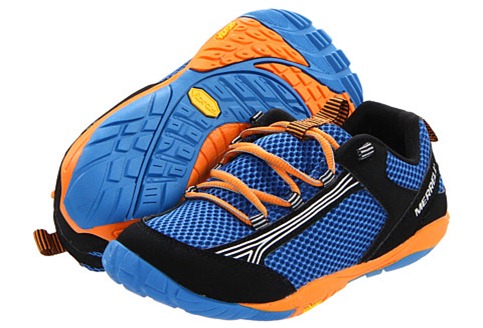 The Merrell Flux Gloves are awesome kid shoes because they’re zero drop, minimally cushioned, super flexible, and provide a roomy toebox. The Vibram sole is very durable – the same sole is found on the kid’s Trail Glove which my son wore for most of the last school year without wearing through it – the kid’s Trail Glove is another great option: 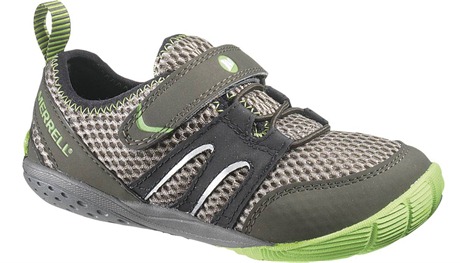 One issue my son had with the Trail Glove is that the toe bumper began to separate from the upper material – I think the black portion of the upper at the tip of the toebox shrunk a bit after getting wet which let to the delamination. It never progressed beyond being a cosmetic defect, so not a big deal, and he could have cared less.

Some parents may balk at the price for the Merrell kid’s shoes ($65.00 for the Flux Glove, $60.00 for the Trail Glove), but my take would be that if you are buying a shoe that your child will be wearing for 7-8 hours per day at school, better to spend a bit extra on something that is flat and roomy and does not constrict their growing feet (though mine were review pairs provided by Merrell for review, I will happily buy another pair when he outgrows his current pair of Flux Gloves, and have spent a roughly equivalent amount on a pair of NB Minimus kid shoes). Given that my son’s Trail Gloves lasted for most of the last school year, I have no issues with the cost of these shoes (especially since we adults often don’t hesitate to throw down a hundred bucks or more for a pair of running shoes that might get used for a few hours a day at most).

My daughter also wore the girl’s Merrell Trail Glove last year, and she was a big fan. This year she has been wearing the Skechers GoRun girl’s shoes: 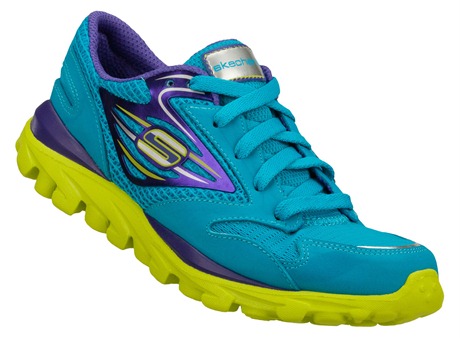 The kid’s version of the Skechers GoRun (currently available for girls only)differs from its adult counterpart in lacking the midfoot “bump” or rocker that is present in the adult shoe (I’ve done some shoe development work with Skechers and shared my opinion that the kid’s version should have no bump and should be as flat as possible – was pleased with the final product they sent me, though I’d love to see it zero-dropped). Although the kid’s GoRun is fairly soft, it’s super flexible (both longitudinally and torsionally), fairly roomy, and has a minimally structured upper (e.g., no heel counter). The heel-forefoot differential is about 4mm, so much less than the shrunken-adult monstrosities that many manufacturers put on the market for our little ones.

In addition to the Skechers shoe, my daughter also has a pair of the girl’s Merrell Flux Glove (provided free of charge by Merrell for review purposes), which in my opinion is probably the best kids shoe available right now:

Until recently, Merrell did not make their barefoot line in toddler sizes. I was pleased to see that with the release of the Flux Glove, they now have “barefoot” shoes for the little guys. My 2 year-old was in Robeez for most of his early toddling days, but now when his “piggies” aren’t free he wears either Crocs or the toddler Flux Glove (just like his big brother, except his have a velcro closure): 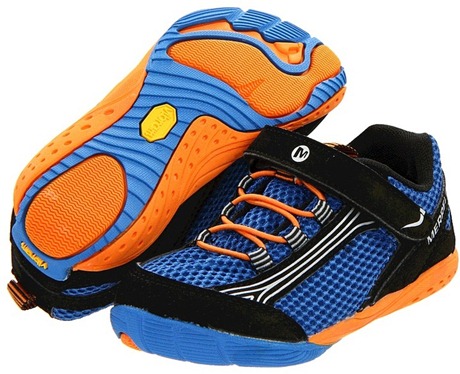 As you can see, I’m a big fan of the Merrell Barefoot shoes for my kids. If I had to pick just one shoe for them to wear, it would either be the Flux or Trail Glove for all three of them. I did recently buy a pair of the New Balance Minimus Trail kids version for my son, but they are still too big for him (dad got his size wrong…). These strike me as another decent option – probably wider in the forefoot than the Merrells, but less flexible and they have a slight heel lift.

So there you have it, my picks for kids footwear. If you have any additional suggestions, please leave them in the comments below!

The Merrell Barefoot Kids Trail Glove can be purchased at Zappos

The Skechers GoRun youth girl’s shoe can be purchased at Skechers.com. Use code ENT15 to save 15%.

Below is another photo of my son sporting his fancy new shoes: 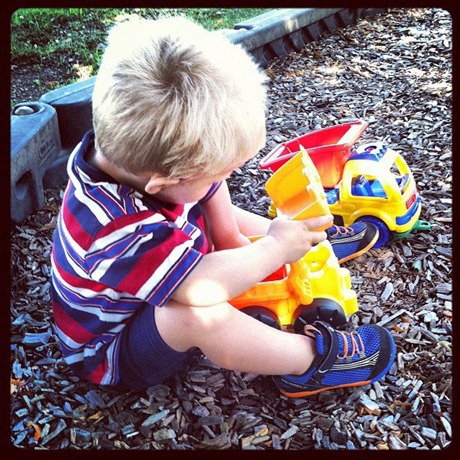