Last week a flurry of articles appeared linking to the abstract of a new survey based study that suggested that traditionally shod runners are 3.41 times more likely to suffer a running-related injury than minimally shod runners. I opted to hold off on posting anything about the study until I had a chance to read the full text, which I have now done.

The study, titled “Relationships Among Self-reported Shoe Type, Footstrike Pattern, and Injury Incidence,” was authored by LTC Donald Goss of the US Army/Baylor University Doctoral Program in Physical Therapy and Dr. Michael Gross of the University of North Carolina. It will be published in the Oct/Dec issue of the Army Medical Department Journal.

The specific survey question pertaining to injuries was the following:

“If an injury is defined as something that caused you to modify your training schedule for at least 1 week due to pain or discomfort (with or without formal medical care), have you experienced any lower extremity injuries in the past 12 months that you believe were caused by running?”

They followed this by asking respondents to specify the anatomical location of the injury (e.g., foot, ankle, knee, hip, etc.)

Among the 904 respondents who had not switched shoe type or foot strike, 73% wore traditional running shoes, 25% wore minimal shoes (mean duration of minimalist shoe wear = 26 months), and the small remainder were primarily barefoot runners (only 16 total). Runners in the various groups were similar in mean height, age, and body mass, though minimalists were more likely to be male, had more years of running experience, and tended to report greater weekly mileage and faster training paces.

Regarding injuries, runners in traditional shoes were 3.41 times more likely to report an injury than experienced minimalist runners (46.7% vs. 13.7%). As seen in the figure below from the Army Medical Department Journal, injury percentages were higher among traditionally shod runners at every anatomical location surveyed. 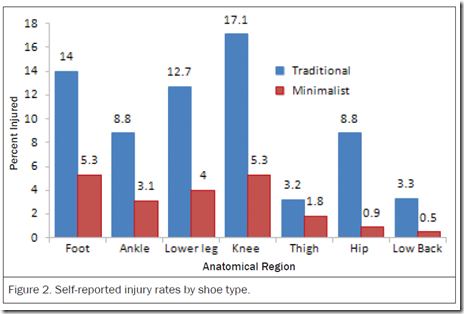 As mentioned above, a large proportion of the initial survey sample was excluded from the above analyses because they had either switched foot strike (n = 866) or shoe type (848) in the previous year. The vast majority of these people claimed to have moved from heel striking in traditional shoes to midfoot or forefoot striking in minimal shoes. The main reason reported for switching was a desire to overcome an injury (40-50%). The group of 397 runners who reported changing footstrike due to injury collectively reported 500 injuries, and the 372 runners who reported changing footwear due to injury collectively reported 411 injuries. It’s not specified if these injuries include those both before and after the change, so it’s difficult to conclude whether they might all be termed “transition injuries.”

This is an interesting study for a number of reasons, but I want to state clearly at the outset that it is based on self-reported survey responses, and as such should not be confused with a prospective experimental study. In other words, we must rely on the accuracy and honesty of the survey respondents, which opens up a lot of room for debate on the value of the findings.

Regarding this, I’ll say that I am very skeptical of the self-reported foot strike percentages. To their credit, the authors openly state this as well, and have themselves conducted a pilot study showing that only about 75% of runners accurately self-report their foot strike type, and that those claiming to be midfoot or forefoot strikers are more likely to be incorrect (i.e., at least one-third who claim to land on the midfoot or forefoot are actually heel strikers).

My own research has shown that in a large sample of traditionally shod marathon runners, approximately 90% are heel strikers. A similar percentage of heel strikers was found again in a recent analysis of foot strike patterns at the Milwaukee Lakefront marathon. Thus, the self reported heel striking frequency of 41.4% for traditionally shod runners is probably a dramatic underestimate. I also have reason to suspect that the 5.9% frequency of heel striking reported by minimalist runners is also a vast underestimate (I need to publish my data on this!). Given this, my feeling is that the high likelihood of significant self-reporting error makes the comparison of injury rates by foot strike of questionable value. The authors are very clear in pointing this out themselves, and indicate that confirmation of foot strike types would make for a more compelling analysis.

In contrast to foot strike type, one would hope that experienced runners responding to a survey like this would know what kind of shoe they put on their feet. The authors did a pilot on this as well and found that 98% of runners could correctly classify their shoe as “traditional” or “minimalist,” though the detailed criteria that they used to differentiate these categories are not provided. Given the likely higher accuracy of shoe type classification, the finding that traditionally shod runners reported 3.41 times as many injuries as experienced (> 1 year) minimalist runners is interesting. One would hope that the respondents accurately reported their injuries, and most runners should be able to recall injuries that caused them to alter their training for more than a week, but it is possible that this result is tainted by enthusiastic minimalists underreporting their injuries (the authors point this out as well). This is the reason why prospective and carefully controlled and monitored studies provide more reliable results than surveys – it minimizes bias.

If we assume that the self-reports are accurate, then this study suggests that those adapted to minimalist shoes are on average at a reduced risk of injury compared to traditionally shod runners. Lots of questions, but that’s the major conclusion. However, if you consider the fact that those who transitioned their footwear or foot strike within a year of completing the survey reported an awful lot of injuries (keeping in mind that it’s not clear whether these occurred before or after the transition), the results don’t necessarily mean that minimalist is better for all. It just means that those who make it through the transition period tend to do pretty well. It could also be a reflection of some other factor – perhaps experienced minimalists get to that point because they have inherently better form or are more injury resistant and would do fine in any kind of shoe. All we can do is speculate based on the survey reports.

Transition of any type changes stress to the body, so it’s not surprising to me that injuries are more common in this period (though another study suggested that barefoot running transition injuries are actually uncommon). The big question to me is what happens to those people who get injured in transition? It would be interesting to do a follow up and see how many of those injured during transition stuck with it, and what their longer term outcomes were like. In other words, is going minimalist and/or moving to a forefoot strike a short term risk for a long term gain? I’d also love to see a before/after analysis of form and foot strike type. Though this study raises provides some interesting results, as with any scientific paper it also raises a lot of questions. My hope is that answers to these questions will continue to appear in the coming years.

What do you think, do you believe the results of this study?