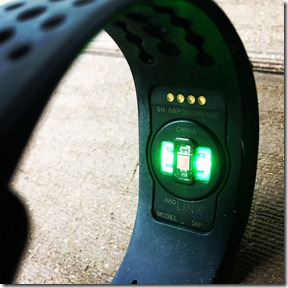 In the past I have not been a regular user of a heart rate monitor while running. I’ve used them on and off, and have found heart rate data to be a good way to monitor my effort, but I’m not a huge fan of chest straps since they occasionally chafe me and it’s just one more piece of gear I have to remember to put on before I leave for a run.

A few months ago a company named Mio contacted me to ask if I’d be interested in trying one of their wrist-mounted heart rate monitors (Disclosure: the product reviewed here was a media sample provided free of charge for review purposes – you can read about my approach to writing honest blog reviews here). I really like the concept of wrist-mounted HRMs. I can wear it as I would a watch, and leave it on my wrist indefinitely if I feel like it. No more strap to worry about taking on and off, no sweaty bands to rinse out, etc. I was game to give it a try, and they offered a choice between the Mio Link and the Mio Alpha.

The main differences between the Link and Alpha are as follows:

Since I already have a GPS watch with a screen on one wrist (Garmin 620) and a Garmin Vivofit activity monitor on the other wrist (also with a screen), the Mio Alpha seemed like overkill. I’m used to wearing lots of electronic devices, but three screens is a bit much! So I agreed to try out the Link, and I’ve now been using it regularly for a bit over a month.

The Mio works by shining two green LEDs through the skin, and there is a sensor between the lights that can monitor pulsing blood flow below the device. Pretty cool! On their website, Mio points out that similar technology is used in hospitals with those little heart-rate sensing clips they put on your finger, but the challenge was to create a device that can measure an athlete on the move, not a patient sitting or lying down in a hospital. This is dependent on a tight light seal between the device and the skin – more on this in a bit.

You can see the Mio Link with the LEDs turned off and on in the two photos below. The sensor is located between the two lights. 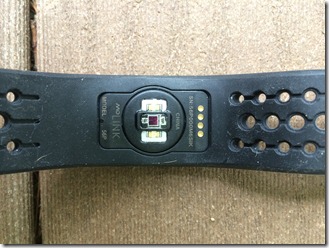 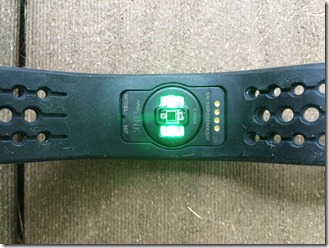 The Mio Link is simple to operate – you just press the button on the top of the device and a light flashes. It can then be paired either with a watch or phone via ANT+ or Bluetooth Smart (a device compatibility list can be found here). Connectivity has been a breeze for me with my iPhone 5s, the Garmin 620, a Garmin Forerunner 15, and the Garmin Vivofit. You can see the Vivofit reading data from the Mio Link in the photo below (the first number denotes HR zone, second number is current heart rate) – they both fit comfortably on the same wrist and the proximity makes for a solid and stable connection. I have also recorded concurrently with my Vivofit and Garmin 620 (on the opposite wrist) without issue. 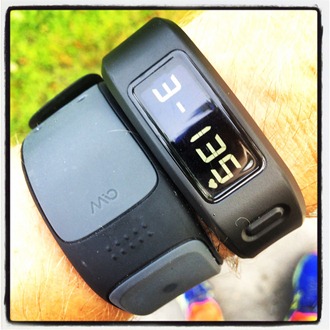 While running, the Mio Link has a light that flashes different colors to indicate your current heart rate zone. You can set these zones up by connecting your Mio to a phone and adjusting settings in the Mio Go app – a red flashing light indicates zone 5, purple is zone 4, yellow is zone 3, and so on… The Mio App also has basic workout features, but my guess is most people will use the device in tandem with a GPS watch or with one of the more dedicated fitness apps (e.g., Strava, Wahoo Fitness, MapMyRun, Runkeeper, etc.). 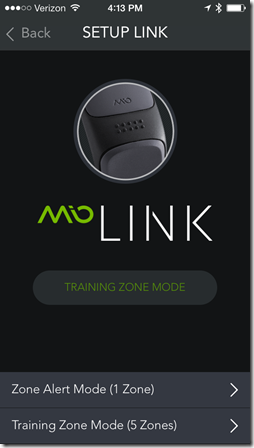 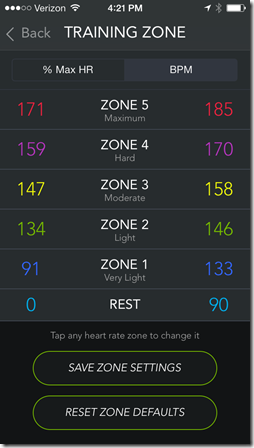 Personally, I don’t pay much attention to the Mio itself while running since I have the HR readout displayed on my synced GPS watch. This gives better real-time feedback of heart rate, and is why I’d probably opt for a Mio Alpha if I didn’t already have a watch that could sync with the Link. 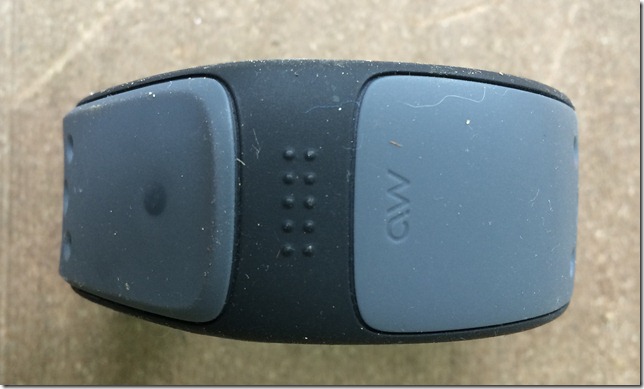 The Mio is powered by a rechargeable battery, and Mio claims about 8-10 hours of recording time per charge. This is pretty consistent with my experience. To charge, I simply pop the Mio unit out of the wristband and place it on its USB charging cradle. I’ve gotten in the habit of charging the Mio anytime I charge my Garmin 620 – keeps them both fresh and ready to go. Couple of complaints about the charging cradle – I wish the cable was a bit longer, and it’s tough to get a good cradle lock unless you take the Mio hardware out of the band (the band doesn’t lay flat very well and tends to pop it off the charger).

My experience with the Mio Link so far has been very positive. I’d seen mixed reviews (e.g., check out the comments section on DC Rainmaker’s excellent review or the reviews on Amazon.com), with some people reporting that it experiences lags or drops HR signal from time to time, whereas others seemed to love it and have had no such problems. I’d put myself in the latter camp.

For the most part the recording from the Mio Link has been solid and consistent for me when paired with either my Vivofit or Garmin 620. The only time I have seen drop-outs with any regularity is during walk breaks when the signal to the 620 on my opposite hand seems to get disrupted, perhaps because my body is between the devices (apparently the ANT+ signal has trouble passing through the body). I’ve never seen a dropped signal on my Vivofit located on the same wrist as the Mio Link.

On rare occasions I have noticed the Mio Link stutter a bit, and every time this has happened I have found that simply tightening up the band a bit solves the problem. The key with devices like this is to create a tight light seal between the device and the skin – not uncomfortably tight, but you don’t want the device shifting around to much relative to the skin surface. It may also help that I wear it a bit higher up on my wrist since it is next to the Vivofit. This part of the wrist is a bit less bony, and may make a tighter light seal.

I should note that I have somewhat meaty forearms, and this may also facilitate a good seal on me. I also have a compact, high arm carry while running, and my hands tend to stay in front of my body (as opposed to walking when they swing forward and backward in front of and behind my hips). Some runners have a lower, more exaggerated arm carry where it may be more likely that the hands become blocked by the body for some portion of the stride – it may be that this type of form will create more problems with stable signal transmission.

For people with connectivity issues, Mio recommends a few things to try:

1. Wear the Link on the same wrist as your watch.

2. Wear the Link higher up on your wrist away from the bony bits (a tight light seal is critical).

3. Wear the Link with the sensor reading from the underside of your wrist rather than the top.

I’d suggest that if your body/form is not a good match for the Mio (e.g., you have connectivity/signal drop issues), contact customer support and ask for a refund.

My experience so far is that heart rate data recorded by the Mio is quite consistent with my perceived effort, so I’m very happy with recording accuracy. For a few examples of recorded heart rate data, below are heart rate tracks produced via the Mio Link and captured by my Garmin 620. The graphs are screen captures from Garmin Connect.

First is from a hilly 6 mile run up in Vermont last week – the downward spike just before the 25 minute mark was a water stop, and the smaller downward spike around minute 42 was due to the arrival of a thunderstorm and downpour that necessitated a stop to put my phone and camera into a ziploc bag. Pretty solid! 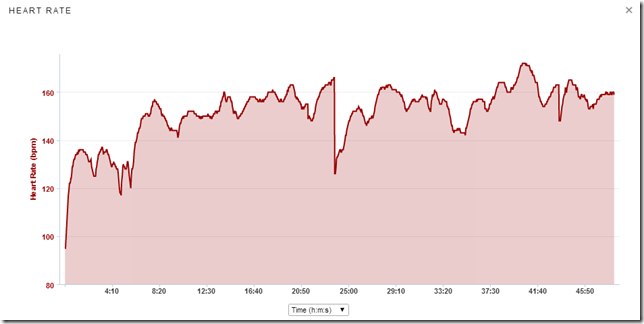 Second is a graph from a hilly 15 mile run I did a few weeks ago. All but the first (bathroom stop at the bottom of a hill) of the downward spikes represent walk breaks on big uphills (practicing race strategy for a hilly ultra this Fall). 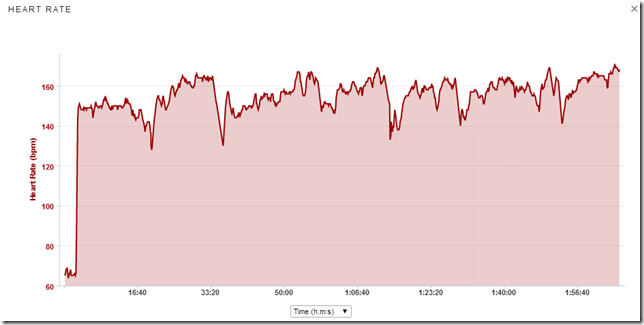 My only real complaint about the Mio Link so far is that the band can be a bit finicky. It seems like every other buckle hole leads to the little nubs at the end of the strap misaligning with their corresponding holes. Not a big problem, but you have to fiddle with the band a bit to get everything lined up right. I’ve also noticed that the holes on the band get a bit uncomfortable against the skin when the band gets wet and the Mio is cinched tight. Loosening it up when not in active use takes care of this (again, it has to be pretty tightly cinched against the skin when in use). 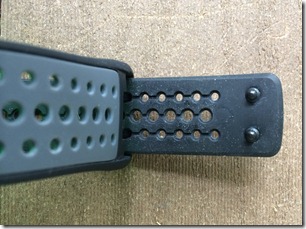 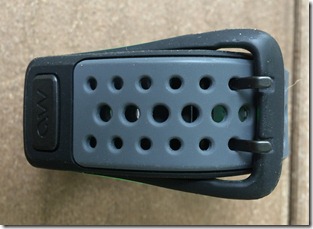 I was kind of skeptical about the accuracy of a wrist-mounted heart rate monitor like this, especially after reading some complaints about connectivity issues and signal dropouts. After using it regularly for awhile I can say that I’ve been extremely impressed by the device, with the caveat that my forearms are meaty (thus create a good light seal) and my running form may be a good match for stable signal connectivity (compact, high arm carry).

Tracking has overall been very solid, and I love the fact that the Mio allows me to ditch the chest strap. The fact that other companies are integrating Mio technology into their devices (e.g., adidas, TomTom) adds further support that it is being viewed as stable and accurate technology by 3rd parties.

If you like to monitor heart rate but hate messing with a chest strap, the Mio Link is definitely worth a look!

Update 1/8/2015: I have now reviewed the Scosche Rhythm+ and prefer it to the Mio Link. Check out the review here.

The Mio Link is available for purchase at Amazon.com (it comes in two sizes depending on your wrist size – make sure you check which is right for you). Amazon also carries the Mio Alpha if you prefer having a screen.

Outside of the US, the Mio Link is available at Amazon UK and Amazon Canada.

Purchases made from retail sites linked above provide Runblogger with a small commission and help me to produce detailed reviews like this one. Your support is very much appreciated!