Missing limbs, but not spirit 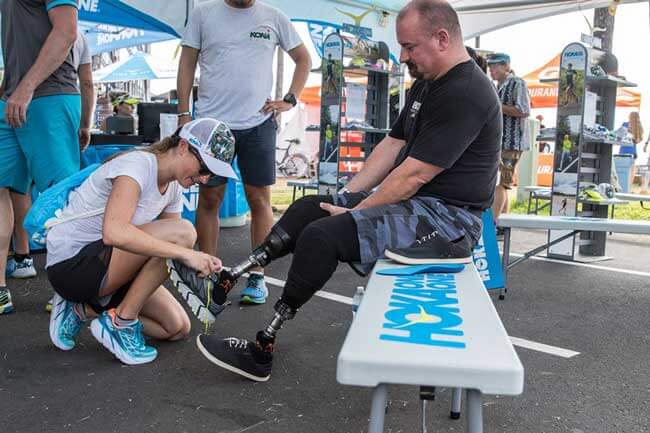 “I was an 18-year-old kid, and I was sitting in the back of a pick-up truck with two of my best friends from high school. An 18-wheeler had decided to pass us and collided with our vehicle. The next thing I know, I’m flying off the back of the truck, and I was dragged 324 feet on the pavement. My doctor said they would have to remove both of my legs, and that I would never be able to run. It was devastating. After countless surgeries and at times losing hope, I read about Ironman Kona. I felt like I had found my purpose. I realized it would be an opportunity to inspire our military coming back from war missing limbs. I started with insurmountable odds. I didn’t know how to swim, I couldn’t afford a bike, and I had never run a marathon. For training, I used to cut carpet or tires for padding and it would never last. I tried everything. I needed something thick, durable, and cushioned. One day, I saw HOKA in a shoe store. I’ve been wearing them ever since.”- After 16 hours and 43 minutes, Scott Rigsby became the first double amputee to ever finish Ironman Kona