Mizuno Cursoris Zero Drop Running Shoe Review: One of My Top Shoes of the Year So Far 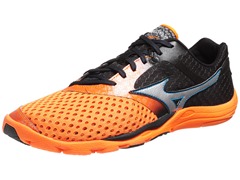 I’m woefully behind on reviewing shoes in my ever-growing collection, so my goal over the next few weeks is to knock out as many as I can for shoes I’ve run in so far this year. I figured I’d start with a personal favorite – the Mizuno Cursoris.

Earlier this year Mizuno released two zero-drop running shoes, the Cursoris and the Levitas. I published a guest review of the two shoes by my friend Frederic, and based on his comments I was really intrigued by the Cursoris and had to try it for myself. I’m glad that I did as I would rank it among the best shoes I have run in this year! (Disclosure: these shoes were provided free-of-charge for review purposes by a Mizuno rep with a lot of tattoos)

The Mizuno Cursoris weighs in at just over 7oz in my size 10. It’s a zero drop shoe with a stack height of 18mm heel, 18mm forefoot. Though I have gone up to a 10.5 in many shoes, the Cursoris is roomy in even a size 10 on my feet, so they may even run a bit big.

Simply stated, the fit of the Mizuno Cursoris is near perfect on my average width foot. It’s snug through the heel and midfoot (there is mild arch support), and opens up into an ample toebox. I’d go so far as to say that this is one of the best fitting shoes that I own – supremely comfortable. The toebox in particular really shines – the upper in the region of the forefoot is composed of a stretchy, open mesh that breathes incredibly well. It’s so open that debris can get in the shoe if you go off-road, but I’ll take that trade-off for a cool ride in the summer. I wish more shoes would take this approach with breathability – the closest comparison I can think of is the old Newton Distance.

The rest of the upper is very simple – no heel counter, smooth interior finish suitable for sockless running, and a removable insole (unfinished below). The upper hugs the foot well without being overly structured or obtrusive. I really can’t say enough positive things about it – I’d rank it up there alongside the Nike Free 3.0 v5 in terms of upper design.

When it comes to shoe soles, I like different feels for different purposes. For form work I like minimal cushion. For speed I like a firm, responsive sole. For casual and long running I prefer a softer sole. The Cursoris definitely fits in the latter category. I’ve seen the sole feel of the Mizuno Cursoris described as like running on a padded gym floor. This is a pretty accurate description – it feels soft yet the stack height is such that it’s not pillowy. For me it’s a near perfect shoe for long, easy runs or recovery runs. It’s also incredibly comfortable for just wearing out and about. This is a bit of a departure from other zero drop shoes which tend to be fairly firm (e.g., the Merrell Bare Access, Altra Instinct, New Balance MR00, etc.). If you want a zero drop shoe with a soft sole, the Cursoris should be among the top shoes on your list to try (along with the Saucony Virrata and Altra Torin).

Given that the sole is soft, I would not classify the Cursoris as being a responsive shoe. It’s not a shoe I would reach for to race a 5K on the road.

On concern I’ve heard about the Cursoris has to do with sole durability. the sole has rubber in all of the right spots – heel (the orange heel patch is rubber, not EVA), across the forefoot, and up through the big toe. However, some have had issues with the exposed areas of EVA breaking down quickly. I have noticed that abrasion of the EVA in the forefoot area tends to form little “tabs” in the forefoot that you can pick off. However, with 50 miles on my pair the wear is nothing I’m overly concerned about (see photo below). If you tend to chew up the forefoot on your shoes you may want to consider this before purchasing this shoe. 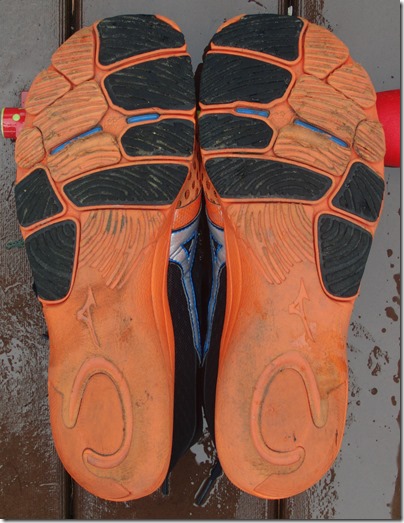 I’ve run about 50 miles in the Mizuno Cursoris and have put in several double-digit mileage runs. I have had nothing but positive experiences with this shoe, and among zero drop cushioned shoes it’s one of my top picks. In fact, if I had to keep only two shoes in this category it would probably be the Cursoris and the Saucony Virrata. I think that highly of it!

You just finished reading Mizuno Cursoris Zero Drop Running Shoe Review: One of My Top Shoes of the Year So Far! Consider leaving a comment!