The Running Warehouse Blog just posted a preview of two new cushioned zero drop shoes from Mizuno: the Mizuno Evo Levitas and Evo Cursoris. Both are due to come out in early 2013, and fill what is rapidly becoming a very crowded niche occupied by shoes like the currently available Altra Instinct, New Balance MR00, & Saucony Hattori, and the soon to be released Skechers Go Bionic, Saucony Virrata, & Brooks Pure Drift. Running Warehouse indicates that “zero drop with a bit more protection and increased comfort is set to be a big story in 2013,” and based on recent trends and product announcements I can’t help but agree.

Details on these shoes remain scant, but the Running Warehouse Blog reports that the Mizuno Evo Levitas is the more minimal of the two shoes, with a stack height of 15mm in both the heel and forefoot, a weight of 6.5 oz (men’s). It is also touted as having a wide forefoot and narrow midfoot. Here are some photos of the Levitas: 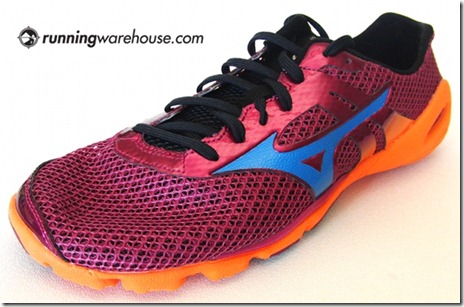 The Evo Cursoris provides a bit more cushion underfoot with a stack height of 18mm in the heel and forefoot, a weight of 7.5oz (men’s), and also is described as having a wide forefoot. Here are photos of the Cursoris:

I’m pleased to see Mizuno increasing it’s variety of offerings at the more minimal end of the shoe scale. I was recently invited to join the Mizuno Mezamashii Project and this included a pair of free shoes, and the only shoe in the current catalogue that matches my tastes is the Wave Universe (though it’s a great one!). I’ve run in both the Ronin and Musha and though they are both solid choices in the transitional lightweight trainer/racer category, I find them a bit too much shoe for my taste. Had either the Levitas or Cursoris been available I would have jumped on them right away!

The one big question with both of these shoes, as it is with many minimalist shoes, will be durability relative to price. MSRP for the Levitas is $110, and for the Cursoris is $120. I wish more shoe companies would make shoes like the New Balance 730 – minimal yet extremely affordable. Nonetheless, it’s great to see another shoe company diversifying its offerings. If Mizuno would bring the Ekiden stateside they’d have quite the lineup!