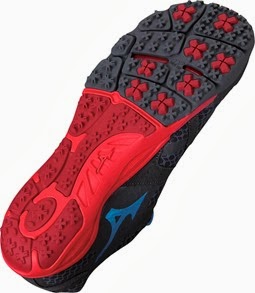 I normally hate memory foam style insoles. In fact, I once included them in a list of running shoe design elements that drive me nuts. My usual experience is that they rob the foot of ground feel, but to date I’ve only encountered this type of insole in shoes that already have fairly significant midsole cushioning. The Mizuno Wave Evo Ferus has changed my mind a bit on the squishy sockliner, and it’s a welcome addition to what has been a surprisingly fun shoe to run in.

I received a review pair of the Mizuno Ferus from Runningshoes.com about a month ago (Disclosure: these were provided free of charge for review purposes). Given that I had previously worn a size 10 in the Mizuno Cursoris, I asked Runningshoes.com to send me the same size. I figured that the same size should work for another shoe in the Mizuno Evo collection. I was wrong. The first pair of Ferus that I received fit huge! There was no way I was going to attempt running in them. So, they were sent back in exchange for a 9.5. I can’t remember ever having dropped down to a 9.5 in any shoe (I more often size up to 10.5), but the new pair fit great and off I went. 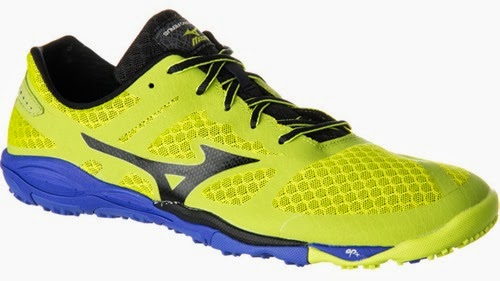 For my first run in the Ferus I decided to head out on a hilly route to my daughter’s school. I was wary of the memory foam sockliner, but the route was all on asphalt road so I though a bit of softness might be warranted – I opted to leave them in. It was also an unseasonably hot day, and since the shoes felt good walking around sockless, I decided to run the 5.5 miles sans socks. Big mistake. There was blood, much blood: 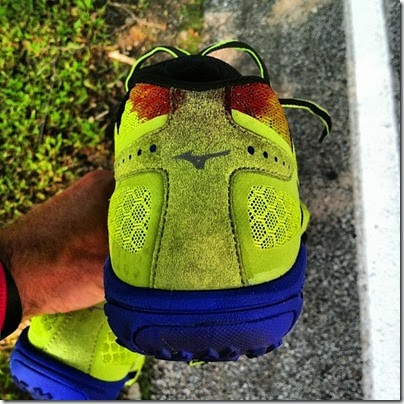 On the plus side, the shoes performed great. My initial concern over the sockliner was unwarranted – it turns out that a thin memory foam sockliner paired with a thin, firm, zero drop sole (14mm heel, 14mm forefoot) makes for a great ride on the road. Just enough softness to take the edge off. And, if you want a firmer ride with good ground feel you can just take the insole out or swap it with something thinner and firmer.

Now, I should point out the obvious – the Mizuno Ferus is a trail shoe. However, though it has a luggy sole, the lugs are low and flat and this shoe works perfectly well on asphalt and cement surfaces. In fact, most of the 30 or so miles I have put on them so far were on roads, with only 2-3 miles total running on trail and crushed rock. I did also hike up and down Mt. Pisgah in VT in them, and so far traction and rock protection has been fine.

Since I’m mostly a road runner with the occasional mile stretch of trail included on some of my frequent routes, I value a shoe that can handle multiple surfaces well. The Mizuno Ferus fits that bill perfectly. In fact, I’d go so far as to say that I think this shoe might be a better choice than the Mizuno Cursoris for road running given durability concerns about the sole of the latter. The Ferus sole is more amply covered by rubber, and wear on my pair is minimal so far despite the road miles.

The upper of the Ferus is a soft, breathable mesh – very comfortable against the foot. The mesh has a bit of stretchiness to it, though not as much as the forefoot mesh of the Cursoris, and extensive welded overlays on the Ferus hold the foot well. I also like that there is a welded overlay along the margin between the sole and the upper given how prone this area is to blowing out in trail shoes. The uppers on my pair are holding up well so far.

I’ve enjoyed the Ferus so much that I’ve actually been wearing it regularly as a casual shoe. It has a very roomy, paddle-shaped toebox and this combined with the low-profile sole make it super comfortable for all day wear.

If I had to compare the Mizuno Ferus to another shoe on the market, the closest competitors would probably be the Merrell Ascend Glove and the Inov-8 Trailroc 235. All three are lightweight (Ferus is 7.9oz in men’s size 9), zero drop, have roomy toexboxes, provide decent protection despite relatively thin soles, and all are fun to run in. I have some concerns about upper durability of the Trailroc 235, so I’d probably rank that one 3rd among the three shoes. Comparing the Ascend Glove and the Ferus, I’d say that the Ferus offers a slightly cushier ride (thanks largely to the insole) and is more comfortable on the road. The Ascend Glove forefoot has a less paddle-like appearance. Both are great shoes.

All in all I have to say that the Mizuno Ferus has been quite a pleasant surprise. If you’re in the market for a low-profile, zero drop road-to-trail shoe it’s definitely worth a look!

Oh, and about the blood – socks solved that problem on subsequent runs

Big thanks to Runningshoes.com for providing the sample reviewed here – you can purchase the Mizuno Ferus over at their website.