I want to begin this post by openly stating my personal bias (which is not going to come as a surprise to regular readers). I am a minimalist advocate, and believe that benefits can be accrued by avoiding overbuilt running shoes and modifying form to reduce things like dramatic heel striking and overstriding. That being said, I believe there are also cases in which heel striking is probably not a big deal. For example, I helped a local chiropractor (Brett Coapland) conduct a gait clinic last night for my local running club (Granite State Racing Team), and we filmed one runner who had overall good mechanics (e.g., not much overstride, asymmetry, etc.), but had a fairly pronounced heel strike and quite a bit of pronation. He’s been running for 15 years but has never had a serious injury. Our advice to him was don’t mess with success. Others had long injury histories and pretty dramatic overstriding gaits, and those would be the ones who might most benefit from a change in form/footwear.

A few weeks ago I got an email from a PR rep for Mizuno offering to send me a pair of one of their “biggest shoe launches to date.” I was intrigued, thinking maybe Mizuno had joined the likes of Saucony and New Balance (and soon Brooks) in putting out a shoe for the minimalist market. However, once I saw the attached photos I knew this was not the case:

Here is Mizuno’s description of the shoe:

“The result of seven years of intense research and development, Wave Prophecy is our most advanced, most dynamic shoe ever. Our engineers designed Wave Prophecy to match your running gait and the natural spring rate of your muscles and tendons. Whether you land on your forefoot, midfoot or heel, Wave Prophecy’s full-length Infinity Wave plates propel you forward with a smooth ride mile after mile. No matter how far and how often you run, you’ll always have the ride of your life.”

Needless to say, I declined the offer of a trial pair, knowing that this shoe is nearly the polar opposite of what I look for in a running shoe. I actually kind of like the way it looks, but there’s simply way too much heel for my taste, it’s too heavy, too expensive ($200!!!), and I knew without even running in it that it would mess with my gait. My general policy is to decline any shoe that I would not consider buying myself as I don’t think I would be the right person to review such a shoe, nor would I want to run any significant number of miles in them.

Earlier today, my friend Bill Katovsky sent me a link to a positive review of the Mizuno Prophecy on Ransacker, and the included video was interesting to say the least:

In a running world where minimalism and encouragement of a midfoot/forefoot strike seems to be the big trend, Mizuno seems to have created the ultimate heel striking/overstriding running shoe. Don’t get me wrong, if you are a heel striker and simply don’t care about the stride debate, these might suit you just fine and the technology may actually be the best thing since sliced bread. However, for someone like me that feels that a shoe like this encourages overstriding, color me skeptical at best. Take a look at these stills captured from the Prophecy ad: 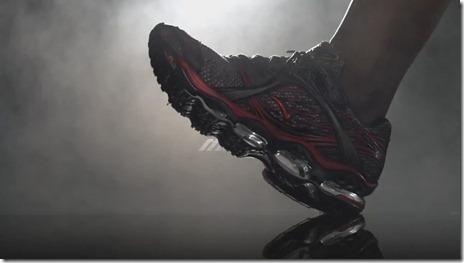 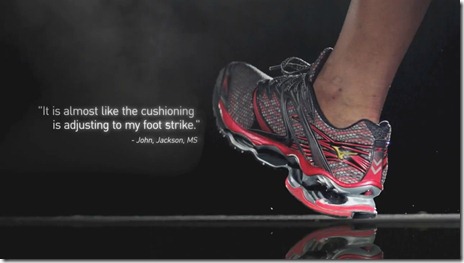 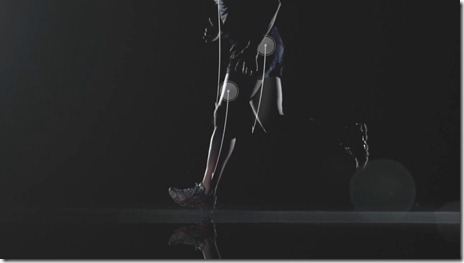 The first image is about as massive a heel strike as I have seen, and if you look at the apparent angle of the lower leg relative to the ground, it’s a tremendous overstride as well. The overstriding gait can also bee seen in the fourth image – it’s almost as if the little white dots represent pain points and the arrows are pointing to the foot position as the source of the trouble

I will give Mizuno some credit here – they include what may be the nicest slow motion view of a heel strike that I have ever seen, and you can really seen that the shoe does seem to cushion the impact (I do fully believe that if you heel strike, heel cushioning is essential):

It seems to me that Asics and Mizuno are the most resistant among the big manufacturers to the new minimalist trend. For example, check out the Asics ad for it’s top of the line Kinsei below (a “high-tech” $180 shoe): 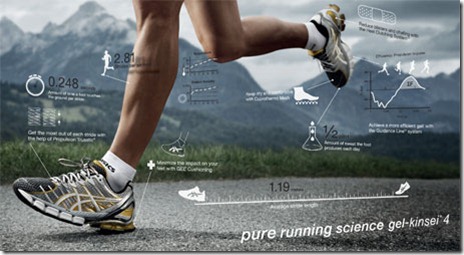 I hope this will change with time as Mizuno does make some really nice shoes – the Wave Ronin and Wave Musha are solid transitional shoes, and the Wave Universe is a favorite of many minimalists. In fact the update to the latter is coming soon, and they have made what, from an appearance standpoint, was a pretty bland shoe into one that looks pretty sweet – check it out (from Running Warehouse): 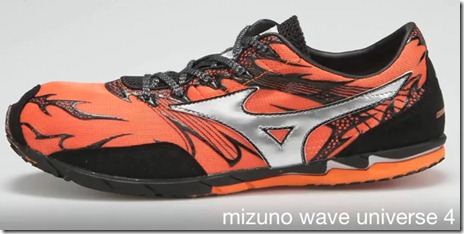 I’d love to seem them expand on the Wave Universe concept with similar designs, and if they could lower the heel on the Ronin by about half, it would be a solid competitor to shoes like the Saucony Kinvara. As for the Prophecy – it’s not the shoe for me.