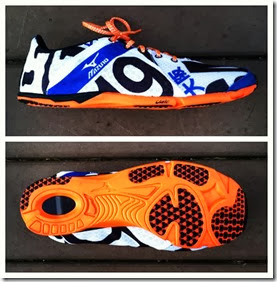 If you’ve been following my shoe reviews for awhile, you’ll know that I’m a fan of running in racing flats. I log most of my miles out on the roads, and I tend to like shoes that are lightweight, simple in design, and somewhat flashy in appearance – flats typically tick most of these boxes.

I started running in more minimally constructed shoes back in 2009. Back then, “minimalist” footwear as a category didn’t really exist. The Vibram Fivefingers were available, Vivobarefoot had a few minimal running shoes, and Nike had the Free which claimed to simulate running barefoot on grass. At the time, one of the most popular running shoes among minimalists was the Mizuno Wave Universe 3. It was a great shoe – ultra light, minimal sole, and a roomy toebox. It did look a bit pinkish in color when wet, but people were running in water shoes, so you took what you could get.

Fast forward 4 years and the minimal shoe craze has blown by. In its wake it left a new niche category of footwear, many of which are basically similar to racing flats built with a wider toebox, flatter sole, and heftier price tag. The venerable Mizuno Universe still remains, now in version 5. Over the past few weeks I’ve been running in the shoe (Disclosure: it was provided free of charge by Mizuno for review purposes), and I have to say that it trumps many of the minimalist shoes that have come out in the past few years when it comes to minimalism. In fact, although it’s categorized as a racing flat, it’s probably one of the best ultraminimal shoes I’ve run in.

First things first, the Mizuno Universe 5 is incredibly lightweight. Running Warehouse lists it at 2.8oz in men’s size 9. My pair in size 10 come in at 3.1oz. The only shoes I have that are in its league in terms of weight are the Asics Blazing Fast and the New Balance RC5000. You put it on and it feels like nothing – you can barely tell that there are shoes on your feet. 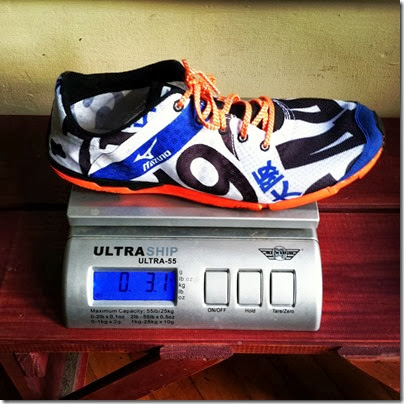 Given that it weighs so little, everything about the shoe’s construction is minimal. The upper is nothing more than a thin, well ventilated mesh. There’s really no structure at all to the upper except for a small flexible tab at the back of the heel (presumably to keep it from slipping down) – it feels very much like a sock with a sole attached.

A big improvement over previous versions of the Universe is that Mizuno ditched the vinyl-like material that used to line the inside of the ankle collar. That stuff would chew up the skin over my Achilles if I went sockless. The collar of the Universe 5 is a soft, lightly padded fabric – it’s a welcome change and it does not bother my skin (just ran 6 miles sockless immediately before writing this and no trouble except for a bit of abrasion from a seam by the arch that appeared at about mile 5).

In terms of fit, the Mizuno Universe has been popular with minimalists in large part because it offers a much roomier fit than other racing flats, which typically fit narrow up front. My sense is that the U5 is roomier than previous iterations of the model. The forefoot is downright spacious, and should accommodate all but the most paddle-footed.

Here’s a picture comparing the MWU4 (I’ve kept a new pair in reserve, it’s a classic!) and MWU5 – the 5 may appear a bit wider in part because there is so little structure to the baggy upper, but it does feel considerably wider in the forefoot to me: 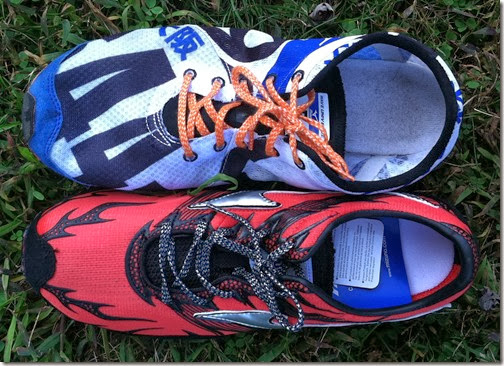 I did a set of fast 200m intervals on the track in the U5 and the baggy fit was a bit of a problem on the turns – my forefoot slipped around a bit. Cinching the laces a bit tighter probably would have helped, but I didn’t want to stop the momentum of the workout. I have not had any slippage issues on the road in them.

As with previous versions, the insole of the U5 is non-removable, and arch support is minimal to non-existent.

The sole of the U5 is also quite a bit slimmer than that of its predecessor: 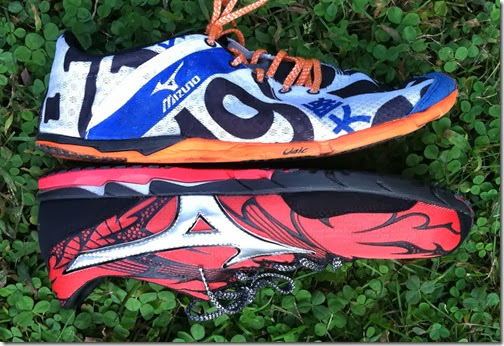 Running Warehouse lists stack height of the U4 as 18mm heel, 14mm forefoot, whereas the U5 is 13mm heel, 11mm forefoot. The difference should be immediately noticeable to anyone with experience running in previous iterations of the shoe. The U4 felt like an ultralight racing flat to me, the U5 feels almost more like a barefoot-style shoe than a flat. There is very little sole underfoot, and it’s a fairly firm ride. It almost fits and feels like the Merrell Vapor Glove with a thin slab of foam added to the sole.

After my first few runs in the U5 I was surprised to notice that my calves were tight and sore. I’ve been running a in zero drop shoes a lot lately, so this surprised me a bit. I attribute the soreness to the combo of the firm, minimal sole and the fact that they made me want to push the pace. Mizuno uses it’s new U4ic midsole compound in the U5, and they claim it provides equal cushioning in a thinner package. The shoe feels more minimally cushioned to me. 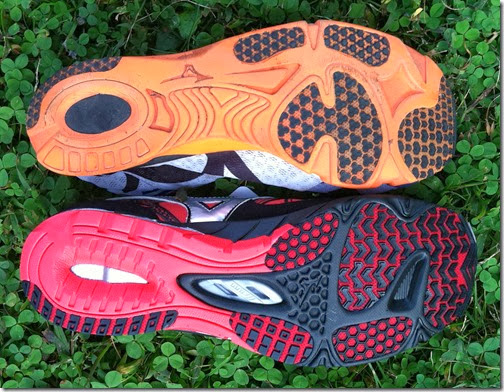 The outsole of the U5 carries over the nubby design from previous versions of the shoe, though in a slightly different pattern. I have about 20-25 miles on the pair in the photo above, plus I’ve been wearing them to work, and wear seem to be most noticeable on the exposed EVA in the midfoot and forefoot. I have not experienced any major durability issues, but as always my ability to comment on durability is limited by the number of miles I am able to get on shoes before writing reviews (it’s difficult to review lots of shoes and get a lot of miles on each).

Gone are the drain holes under the midfoot that were found in previous versions– this should make some people happy as I’ve heard complaints that they let water in when running through puddles (that’s my general experience with drain holes – they’re more of a risk for letting water into a shoe on wet day than really helping get it out). One other change is that the concavity under the heel is larger in the U5 – this isn’t an issue while running, but while walking on hardwood floors or tile it acts like a suction cup.

The Mizuno Universe 5 is a bit hard to peg. It’s designed to be a racing flat, and given its weight, you can’t help but want to run fast in the shoes. I’ve done a track workout, a few tempo runs, and a few easy runs in the shoes and they perform well. However, since sole is so thin, it’s very flexible and lacks the longitudinal stiffness of other racing flats. As such, it lacks the pop found in a shoe with a stiffer sole like the adidas Hagio. I guess it comes down to preference – a stiffer flat may provide more pop, but stiffness typically means a bit more sole material and thus greater weight.

Comparing the U5 to it’s closest competitors, the Asics Blazing Fast and New Balance RC5000, the U5 feels more flexible and has a much roomier fit (note – I have the Blazing Fast, but have not run in them yet). It’s also more flexible than the Universe 4. My feeling is that the Universe 5 runs a lot like some of the minimalist shoes that are out on the market. Shoes like the adidas Gazelle and New Balance MR00 come to mind.

I’d be remiss if I didn’t comment on the appearance of this shoe. Mizuno has a history of making the Universe a flashy shoe – the original U4 was bright orange and had flames on the upper. When I first saw a photo of the U5 I was appalled. I thought they looked hideous. I have to say, the shoes have really grown on me. The design is certainly unique, and I’ve taken to wearing them out and about simply because they look unlike any shoe I have ever owned. You will get comments if you wear these! 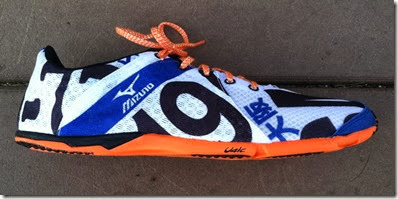 The Mizuno Universe 5 is a shoe that will appeal to two niches in the running world. First, those who like to run fast and want as light a shoe as possible to allow them to do that. Second, those who just want a very minimal shoe with a roomy, comfortable fit. I kind of straddle those two groups, and thus this shoe is a fantastic match for me. If you like the gaudy appearance and can handle the somewhat hefty price tag, the Mizuno Universe is a lot of fun!

The Mizuno Wave Universe 5 is available for purchase in the US at Running Warehouse. Outside of the US, it can be purchase at Sportsshoes.com and Wiggle.