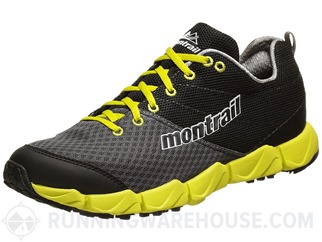 As a European running shoe geek you sometimes have to gamble. Some shoes only make it to Europe months after their release in the US, and some shoes never officially make it over the big pond. While it is usually not difficult to find a retailer willing to ship the shoe of desire over to Europe, it is costly (think international shipping charges, taxes, and customs) and there is no safety line: if you don’t like the shoe, or if it simply doesn’t fit, you’re screwed. Yet, sometimes there is a shoe for which you are willing to take the risk. For me, the Montrail Fluidflex II was my most recent shoe gamble.

If you don’t like to read lengthy reviews, you can stop here: I won the lottery, maybe not first prize, but maybe second or third, with this gamble. With a stack height of 15m/11mm (according to Montrail; Running Warehouse reports 22mm heel, 17mm forefoot) and a weight of just 8.3oz (238g), and, according to Montrail, “a close-to-ground feel that both flexes with the natural movement of your foot, and protects it at the same time” I envisioned the Fluidflex II to be a good replacement for my Nike Terra Kigers which were nearing the end of their life. After having run close to 90km on varying surfaces and all different types of conditions I have to say that this assumption was true: the Fluidflex II shares many of the ingredients which made the Kigers (and the Wildhorse) such a fan favorite. Let’s dig into the details, from top to bottom. 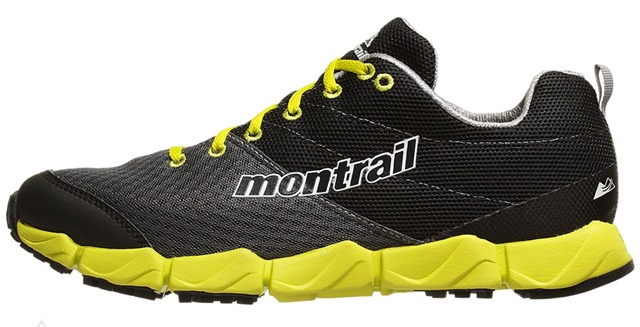 The Fluidlfex II upper can be described as a simple, no frills upper which is more about functionality than appearance. That does not mean that the upper is ugly; the plain black/gray design is simply a (welcome?) contrast to the nearly psychedelic colorways of many other shoes these days. The upper consists of what seems to be two different types of mesh: a more open one over the front third and lateral side of the shoe, and a denser mesh for the the rest. Relatively little material is added to provide structure; there are some seamless overlays on the medial side and around the lower heel. There is also a small toe bumper to provide some protection for the front of the foot. The heel collar is relatively soft, and there are two small “pillows” inside the shoe on each side of the heel to prevent heel slippage. For me this feature worked very well, but I could imagine that this might not be the case for everyone. The upper breathes quite well and, accordingly, also dries relatively quickly after water crossings.

In contrast, the Fluidflex II upper lacks some useful features for tougher trail conditions, such as a randing or a gusseted tongue. I have not run enough miles in the shoe to comment on upper durability, but I would assume it to be similar to other shoes of its class. The fit is ok but not as dialed in as I would have liked it, i.e. for me not as precise as the fit of the Kigers. The upper volume is about average (or slightly above) and the toebox is of medium width, which for me was acceptable as it does not taper very aggressively and there is some stretch to the upper. I should add that I got the shoe in a US10 – if I had been able to buy it locally I certainly would have tried a 9.5 as well, so take my comments on fit with a grain of salt.

This is sweet, oh so sweet. The Fluidflex II has a simple, full length EVA midsole (called Fluidfloam by Montrail) without any gimmicks. The closest comparison I can come up with for describing the midsole material is Adidas’s Boost material. The Fluidfloam is maybe less technologically advanced, but the basic ingredients of the ride feel quite similar: It is a slightly softer cushioning but there is plenty of responsiveness if needed. It is one of the few shoes which really work well for me at different speeds, and also surfaces.

The Fluidflex II works well on the trails, but I also wouldn’t hesitate a second to run long stretches of road in it. Compared to the Kigers the ride is slightly softer, with an equal level of ground feel but more flexibility, thanks to the pronounced flex grooves in the mid-/outsole. Obviously, the flexibility is also in part due to the lack of a rock plate. This again hints at the fact that this shoe is probably not designed for the most technical of all trails. Similar to Nike’s latest trail offerings the rear part of the heel is also slightly “lifted” or “rounded”, i.e. not in contact with the ground when standing in the shoes.

At a first glimpse it is easy to underestimate this simple outsole design. Obviously it is not made for running on deep and soft surfaces (such as mud and snow). On most other surfaces, however, the Fluidflex II provides excellent traction (better than the Kiger or Wildhorse). Especially for wet rocks (and, to a lesser degree wet roots) the traction is among the best I have seen. I attribute this to three different aspects of the shoe design: the relatively small lugs are narrowly spaced, meaning there are many of them, which increases the contact area between shoe and the ground. The flexibility of the shoe, and the softness of the midsole material, also increase the contact area because the shoe can more easily adjust to the surface contours. Finally, in my experience exposed midsole material simply provides more grip on wet surfaces than most rubber compounds.

On the downside, the Fluidflex II shed mud slightly less well than shoes with wider spaced lugs. Wear might also be an issue – after roughly 90km I am seeing clear signs of wear under the big toe area. However, this is a typical high wear area for me and the Fluidflex have seen quite some road mileage as well, so I am not really concerned. I expect the outsole lifetime to be similar to the Kigers. 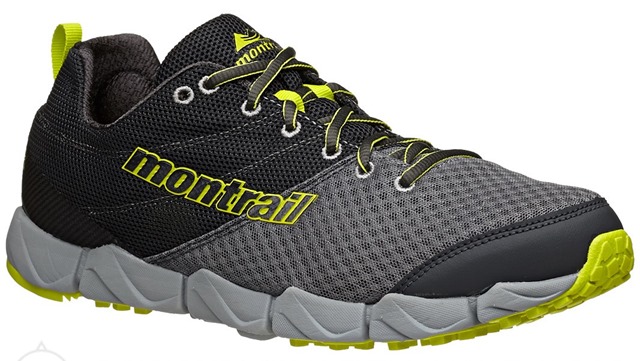 2015 colorway of the Montrail FluidFlex II

The Montrail Fluidflex II are rather simple shoes but in a good, “let’s just get the job done”, way. They are definitely one of the better trail shoes I have run in over the past year, so my gamble was well worth it. While they are not made for super-technical off-trail runs in the high-mountains, they are very well suited for fast or slow, short or long outings on groomed trails, runnable single-track or hybrid road/trail use.

The only real critique I have of this shoe is the fit of the upper which is slightly too sloppy for my feet. However, it is difficult to say if this is a general problem or if I simply should have gotten them half a size smaller. As a final point I would like to add that while the Fluidflex closely resembles the Nike Terra Kiger in the types of runs they are well suited for, there is actually another shoe which the Fluidflex constantly reminds me of: the Skechers GoRun 2/3, albeit without the midfoot bump and a trail outsole design. Both shoes have simple uppers, are very flexible, and have midsoles of comparable thickness, softness and responsiveness. In that sense the Fluidflex II could be a solid option for fans of Skechers road shoes.

The Montrail Fluidflex II can be purchased at Running Warehouse for the bargain price of $54.88 (on clearance since a new colorway is coming – see photo above). Use code RUNBLOG10 for an additional 10% off. They can also be purchased at Amazon.com for under $50.