Just a quick post to let you know that several new 4mm midsole drop shoes from Saucony have been officially released and are available at Running Warehouse.  Here’s a quick look – I have the Peregrine already, and am hoping to get review samples of both the Mirage and the Fastwitch 5 soon so I can do full reviews and comparisons to the Saucony Kinvara. 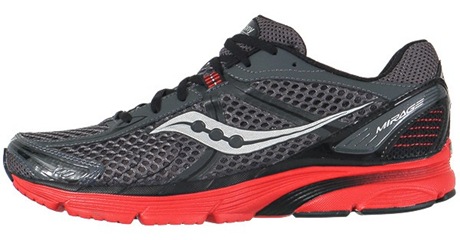 The Mirage is being marketed as a Kinvara cousin with a bit of added stability. It’s a bit heavier than the Kinvara, but still a nice looking shoe that shares the low profile (4mm midsole drop) that helped make the Kinvara so popular. I’ve tempered my feelings on stability elements in shoes a bit (not from a pronation control standpoint – I still don’t think pronation control should be a primary basis for shoe choice). Rather, I find sometimes that pure neutral shoes can sometimes be too soft and can cave medially as the foot rolls over. I’ll withhold any final judgment until I can try the shoe out. 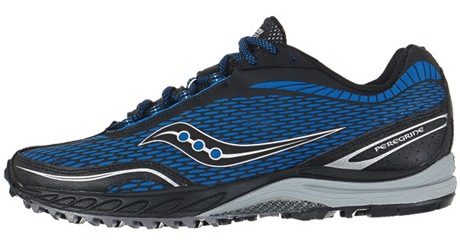 I bought a pair of the Peregrines a few weeks ago, and have put about 10-15 miles on them so far. The fit and feel is very much like the Kinvara (and they are also 4mm midsole drop from heel to forefoot), but the shoe is heavier and has very substantial, grippy lugs. Most of my runs in them have been on snow and rutted ice, and they provide great traction. A benefit of the heavy duty (but heavy!) outsole is that the shoe feels a bit firmer underfoot than the Kinvara, which some feel is too soft. 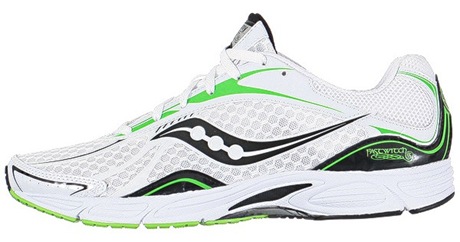 The Fastwitch 5 is an update to an old stand-by in the Saucony racing shoe lineup that has been reduced to a 4mm midsole drop from heel to toe. I wore the Fastwitch 2 in two of my previous marathons, so I have a history with this shoe, and am looking forward to seeing how it performs in comparison to the Kinvara (my most recent marathon shoe). I also like the bright green version available on the Saucony website – hopefully Running Warehouse will carry this colorway soon!