In my previous post I provided some data on how my own stride rate and stride length vary with running speed. In that post I referenced another article on running cadence by Alex Hutchinson – I sent Alex my data, and he went ahead and added it to a graph that he had compiled showing stride frequency/rate vs. speed for himself, Amby Burfoot, and a group of runners from a study by Peter Weyand. Here’s the result: 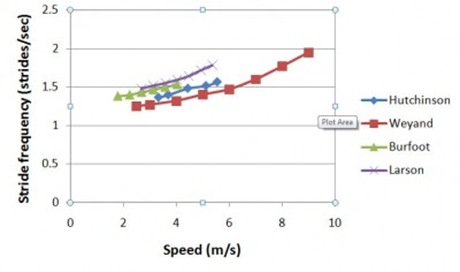 What this graph shows is that for any speed, my cadence (purple line) is higher than that of both Alex and Amby, as well as the average of the individuals in the Weyand study. Putting aside the fact that this graph compares me, a college professor who just barely qualified for the Boston Marathon, to a former winner of said race, as well as to a former middle distance runner for the Canadian National Team (Alex), the big question is why does our cadence vary so much? Is it because Amby was on a treadmill? Maybe, but I suspect not, since Alex also recorded his data on the road. Could it be that my tight leg muscles limit my hip extension and thus stride length, forcing me to rely on a higher cadence to maintain speed? I suggested this, and Amby’s response was to challenge me to a “flexibility” match. Apparently he suffers from the same tight-legged affliction. Perhaps it’s body weight – I’m pretty certain that my BMI is quite a bit higher than either of theirs. Maybe it’s our form – Alex admits to being a bit of an overstrider. Maybe Amby’s stride is longer because he’s a bit taller, but I’m not sure what Alex’s height is (there is some literature on how/if anthropometric measures influence stride length which I hope to get to in a future post). Maybe it’s just the structural makeup of our muscles and tendons – perhaps at an individual level they simply are most efficient over a certain range.

In a follow up post on his own Peak Performance blog, Amby provided a table with additional comparisons, and he included a data point from Usain Bolt, making me feel even more inferior than I already did among such lofty running company. Here is Amby’s table (with some added numbers from my own dataset):

Amby very correctly points out that though the varaition in these numbers are interesting, they don’t necessarily tell us much about performance. Amby writes this:

“So I said this column was about oxygen consumption, right? Here’s why. All the stride stuff doesn’t tell us much. After all, there are no gold medals for highest-stride-rate, or Peter, a 3:15 marathoner, might be a contender in London next summer. They give gold medals in distance racing for maintaining a fast pace for long distances, which is closely related to oxygen consumption at a given speed.”

And he’s absolutely correct. I will make the bold statement here and now that despite my wiley coyote and the road-runner like cadence, I will not win the Olympic Marathon next year! The reason? I’d venture to guess that it’s all about physiology. Form is part of the equation, but perhaps only a minor one when it comes to performance at a broad level. A minor tweak might make a difference for a runner who has elite physiology already, but no form change is going to allow me to win, or even ever have a hope of competing at anything more than the local race level. When I look at what elite marathoners can do, it seems like magic. The thought of being able to run 26.2 miles at sub 5:00/mile pace is mind boggling, as I can barely eek out 400m at this pace. I simply do not have the necessary cardiovascular, respiratory, and muscular physiology to handle this kind of pace for a long time. Perhaps if I lost 30-40 pounds I might be able to stretch the distance at that pace out just a bit, but I can assure you that I’ll never be breaking the finish-line tape in first place at a major marathon.

Where all of this cadence business might matter though is in terms of injury risk. For recreational runners like myself who aren’t trying to squeeze out every last bit of speed from our legs, tweaking cadence does seem to have potential to reduce the dreaded overstride, which in turn might reduce loading on the legs a bit. But, altering cadence can be really tough, and requires consistent practice, since the body tends to fall into a comfort zone due to muscle memory. Changing cadence feels really awkward at first, and thought there are studies that have shown that better impact moderating behavior can be learned and consolidated, I can’t recall if any have specifically looked at cadence. To be honest, I wish I knew what my cadence was 2-3 years ago, because I have no idea if mine has actually changed, or if 180-184 has always been my easy-pace comfort zone. I think we still have a lot to learn about all of this, and I love the continuing experimentation!

Thanks to Amby and Alex for adding to and continuing this discussion!