Moses Mosop Bounces on his Forefeet and Floats Through the Air to Win the Chicago Marathon!

I’ve received a few comments regarding Chicago Marathon winner Moses Mosop’s unique running style – the race was held on Sunday, and Mosop won with a course-record time of 2:05:37. Last night I received an email from Amby Burfoot, who had forwarded a photo of Mosop taken near the finish line at Chicago. The photo was taken by Raymond Britt of RunTri.com, and came with the comment “Literally, 4-5 inches off the ground with the finish line in sight. See shoes, concrete, shadow. Remarkable.” 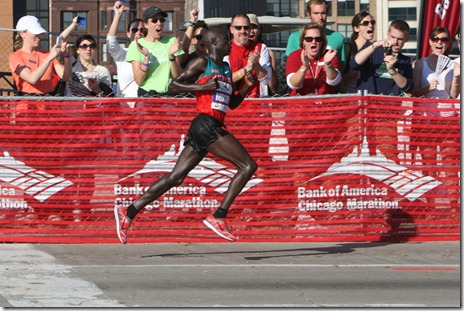 Moses Mosop nearing the finish line at the 2011 Chicago Marathon – photo by Raymond Britt of RunTri.com

Back in may I wrote a post where I did a brief analysis of the running form of some of the top runners in the Boston Marathon, and Mosop was one of the group that I looked at (he finished second at Boston). Below is what I had to say about Mosop and eventual Boston winner Geoffrey Mutai:

Video 1 – Geoffrey Mutai (green singlet) and Moses Mosop (black/red singlet). Both have absolutely beautiful form. Lower leg is near vertical on ground contact for both, and both have a slight forward lean. Mutai is a midfoot striker, whereas Mosop is a true forefoot striker. Mosop has a slightly higher arm carry, whereas Mutai drops his below his waistline a few times.

I also used the above video to calculate some stride timing data – of the runners I was able to analyze, Mosop had the shortest stance time and the longest aerial time – he was the only runner of the bunch who, based on the limited number of strides available to analyze, spent more time in the air than on the ground – this probably explains why he seems to bounce and float through the air when he runs:

In a scatterplot showing each runner plotted according to their values for swing time and stance time, Mosop came out as rather unique, mainly because his stance time is so short: 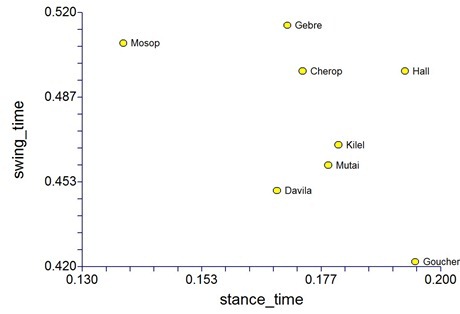 What does this mean? Perhaps nothing more than the fact that it once again shows that there is more than one way to be an elite caliber runner when it comes to running technique. Mosop seems to have a very distinct, almost bouncing gait, and it was good enough to set a course record in Chicago. A few people have sent me photos of Patrick Makau, who recently set the marathon world record in Berlin – it’s very hard to say for sure from still photos, but indications suggest he may be a mild heel striker (photo below from Photorun.net). Mutai, who won Boston, seems to be a midfoot runner. Three really fast guys, three seemingly different techniques – as always, variation is the norm rather than the exception! 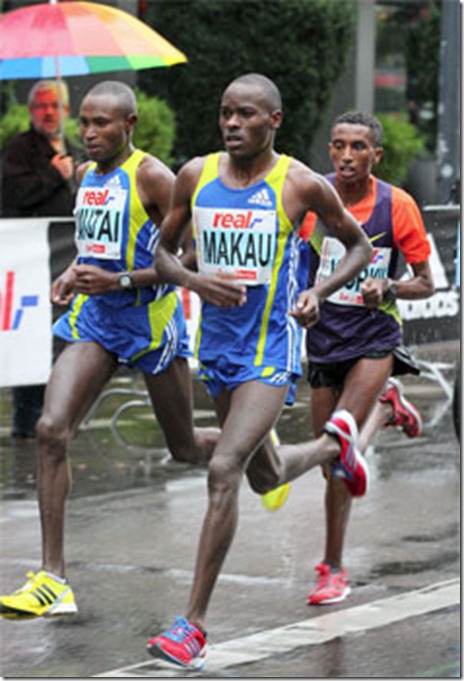 Patrick Makau at Berlin – via Photorun.net

You just finished reading Moses Mosop Bounces on his Forefeet and Floats Through the Air to Win the Chicago Marathon!! Consider leaving a comment!