Motorola MOTOACTV GPS Workout Recorder Review: Close, But Not Quite There 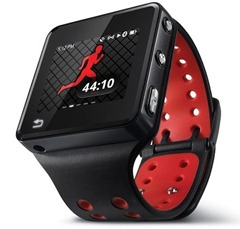 For the past three months or so I’ve been using the Motorola MOTOACTV GPS on almost every single one of my runs (disclosure: this product was a media sample provided to me free of charge by the manufacturer for review purposes). About a month into using the MOTOACTV I was prepared to write a review claiming that I would no longer have a need for my Garmin and that the MOTOACTV was the device that would best all other GPS devices on the market. Alas, I never wrote that review, and in the following few months I’ve come to the conclusion that this is instead a device still in need of some improvement.

The reason for my change in outlook is that the Motoactv has started to feel like a beta version that was released before all of the kinks could be worked out. This is frustrating because the device is pretty darned amazing in many ways, but it’s limitations make it hard for me to recommend that anyone buy it right now.

Let’s start with the good stuff. Basically, the MOTOCACTV is like an iPod Nano crossed with a Garmin Forerunner. It can both record a GPS signal and spit out pace, splits, etc., and it can also play music. It does both of these things quite well. When running with both my Garmin 205 or 305 and the MOTOACTV the GPS results are very close, and I have found the accuracy of the MOTOACTV to be overall excellent. This is one of the reasons that I have been willing to go solo with the MOTOACTV for so long – it works very well as a workout recorder. 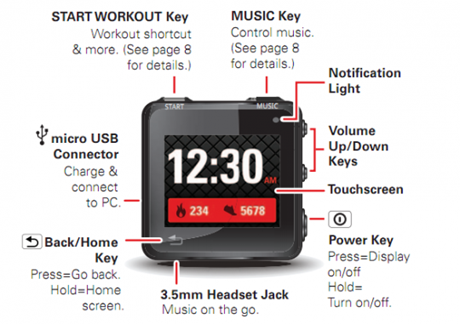 Though bigger than a typical watch, when attached to the optional wristband the MOTOACTV is not so big that it cannot be worn as a full-time wristwatch – I have done so for a few months and have found it plenty comfortable (and it has prompted a lot of comments!). The interface is clean and very well designed, and there are plenty of options to customize the data displayed on the screen (for workouts, you can choose up to 4 customizable data fields at a time), and the full color display looks beautiful. The screen is touch sensitive, so a simple swipe will allow you to jump from the real-time data readout to a listing of your splits. You can even swipe to a real-time map showing your location and running route (though cool, this is limited by the size of the screen, and the lack of detailed map labeling makes it of limited practical utility). There are also multiple clock-face options for using the MOTOACTV as a watch, and you can set the device to function as a pedometer that records the number of steps that you take (accuracy is questionable, especially if you do a lot of walking while pushing a baby carriage…). 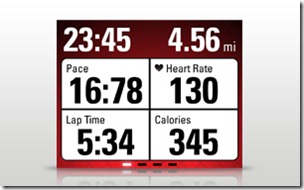 The ability to play music is also a huge plus for this device as it means one less gadget that I need to lug around in my workout bag – I actually have not had to use my IPod Nano for several months. Importing music to the device is simple, it plays files purchased on iTunes with no issues, and sound quality is very good. Having an all-in-one device like this is really nice, and is the major draw for me.

So, the MOTOACTV has a beautiful and user friendly interface, records GPS signals accurately, and can play music – sounds like a dream device, right? Not quite. There are some serious issues that in my opinion need to be addressed before the MOTOACTV becomes a prime-time player in the workout GPS world. Here’s a rundown of what I see as the biggest issues.

1. The headphone jack is problematic. Because the headphone jack does not have a cover, it’s wide open to sweat, water, etc. After about a month of use, I started to notice that my headphones would not work sometimes when I plugged them in – sometimes I could get them to kick on by twisting the plug around, but success with this technique was spotty. This problem has gotten progressively worse, and now I have completely given up on using plug-in headphones – the jack is essentially non-functional. In perusing the MOTOACTV online forum, I have seen numerous people reporting this same issue, and it is a major flaw in the device (apparently you can call and ask them to send a rubber grommet to stick in the hole – this should have been standard with the watch). My workaround is that bluetooth headphones continue to work just fine, so I have been able to continue to use the device as a music player. It would appear that the problem is thus specifically isolated to the jack. I would not recommend buying the MOTOACTV unless you plan to invest in a pair of bluetooth enabled headphones to go with it.

2. Battery life is not great. Motorola has been proactive on this issue and has issued several firmware updates to improve battery life, but let’s just say I still would not risk using the MOTOACTV as a GPS device for any race longer than a half marathon. I have not done a multi-hour run with it so I can’t comment on absolute battery life, but it’s not terribly great in active GPS recording mode (especially with music playing). Even just using the device as a watch, it needs a charge every other day or so. Thus, battery life lags far behind most every other GPS device currently on the market.

3. The “Start” button on the top of the watch is touchy (wither that or there is some weird software issue). I find that the watch will randomly start workouts while I’m walking around, and after pausing the workout on a run the watch will frequently restart the workout on its own before I am ready to go and without me touching it (very annoying!). This is a big pain, especially since the online software does not make it particularly easy to delete mistaken workouts.

4. There is currently no streamlined way to export data from the Motoactv to the workout recording platforms that I use (Sporttracks and dailymile). It is possible to export workouts as CSV files and then import these into Sportracks, and there is a bookmarklet that facilitates upload to dailymile, but indirect uploads are cumbersome and have gotten old fast. Furthermore, some of the CSV files I upload to Sporttracks need to be corrected, so I have concerns about accuracy using this method (I’ve uploaded a few 8000+ mile runs – wish I was capable of that!)I haven’t played around much with the Motorola workout site since I don’t have any desire to adopt yet another recording platform.

My general feeling about GPS devices is that hardware manufacturers should worry about making the hardware work well, and allow users to choose their workout platform. So may of us are already tied to one site or another and for various reasons have no desire to switch. Thus, facilitating the ability to sync a device easily across platforms should be a priority (maybe this is planned for the future, I don’t know). I kind of view this analogous to the days when manufacturers would make digital music players that couldn’t play iTunes files – no way was I going to abandon my investment in all of my iTunes music to adopt a different piece of hardware. To be honest, even given its flaws, I probably would still use the Motoactv regularly as is if I could simply download data directly into Sporttracks. Without this, it’s one more nuisance to have to deal with that my trusty old Garmin 305 solves effortlessly.

The above points are what I view as critical flaws or nuisances, some of which may be fixable or at least improvable with firmware updates, others of which are design issues (the headphone jack). Clear these up and this would without a doubt be one of the most innovative GPS devices out there, and the Motoactv would be on my wrist every day.

I also have a wish-list of things that could be easy improvements for the watch.

1. Add additional data screens. My Garmin 305 has 3 screens, each of which is capable of displaying four separate data fields. I use all of these regularly – one for general run stats, one for lap data, etc. This would seem to be an easy fix to make via a firmware update – add a few additional screens that can be swiped to view, each which of which can be configured like the standard data screen.

2. Do more with the map view. This is a cool feature, but not of much practical use right now. More detail, return to home capability, etc. would be great.

3. While I’m in the asking mood, since Motoactv is hooked into Wifi, allowing the ability to do a one touch upload to various workout sites would be amazing.

I will finish by saying that there have been a few firmware updates that I have not yet loaded onto my Motoactv. I have hesitated to do so since one of them introduces a “shake to wake” feature that sounds like a total disaster to me (note, my random workout starts are with the firmware just previous to the one that introduced this feature, so that is not the issue with my watch). On the plus side, the folks at Motorola have been pretty proactive about issuing firmware updates for the device, so they do seem committed to improving user experience. I hope they continue to do so, and I hope they continue development on the hardware as I truly believe that Motoactv has game-changing potential. It’s just not quite there yet.

You just finished reading Motorola MOTOACTV GPS Workout Recorder Review: Close, But Not Quite There! Consider leaving a comment!