Home / Blog Posts / Music Review: The Hazards of Love, by The Decemberists

Music Review: The Hazards of Love, by The Decemberists

I’ve become a big fan of The Decemberists over the past few months, having quickly amassed most of their albums in either live form or as downloads from Amazon or Itunes. If you’re not familiar with the band, they’re one of the more unique groups that I’ve listened to in quite some time, in part because many of their songs are story-like tales set in far-off, old, and often imaginary places. Lead singer Colin Meloy’s songwriting skills are impressive, and the vividness with which he can use complex lyrics to paint a scene through his music is incredible. My kids have also taken a liking to many of the songs because they deal with topics that they can imagine in their young minds, from a giant whale swallowing a boat in The Mariner’s Revenge Song to a bird being shot in the wing with an arrow (my daughter covers her ears during this part of The Crane Wife 1&2 because she doesn’t want the bird to be hurt). My son and I actually made up a story about Eli, the Barrow Boy at bedtime one night (he loves doing this, and he has a fascination with the “olden days”). I always love finding “adult” music that I can listen to with the kids, and the Decemberists have recently become a family favorite (though some song screening may be needed on occasion – see The Rake’s Song below). 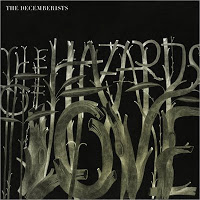 It was with some excitement that I found out last week that The Decemberists had released a new album called The Hazards of Love (thanks to the front page of the Itunes store). I immediately downloaded the album and gave it a listen. My first few times through left me somewhat confused as I had not read anything about this album, and it took me a bit of time to figure out what it was all about. I initially wavered between liking it and not being so sure, largely because there are some elements within it that are atypical of previous Decemberists music (read: louder, hard rockish moments, lack of clear distinction between some songs, repeating song elements). A few obligatory Itunes reviewers suggested that they liked the album, but that the band was trying too hard to go mainstream. After a few more listens however, the reality of what this album is began to sink in. I’m a firm believer that you can’t really evaluate a new album without a solid ten or more full listens, and the more I heard from The Hazards of Love, the more I began to realize what an incredible piece of musical work this album is. It is most certainly not The Decemberists trying to go mainstream by adding in more rocking elements, but rather the band is realizing its full potential by doing what it does best: telling a vivid story. Unlike their previous work, however, this entire album is the story, and it is therefore the most natural progression that the band could make.

Here’s a quickish summary of the plot. The Hazards of Love tells the folk-tale story of two lovers, William and Margaret. William is a shape-shifting forest dweller who was taken in by the villainous Queen of the Forest when she found him abandoned as a baby. She turns him into a fawn, and it is in this condition that Margaret finds him wounded in the forest one day. While attempting to right his legs, the fawn changes shape into a man, William, and they immediately fall in love (though the details of how this happens are left to the imagination). Margaret gets pregnant during this initial encounter, heads back to the city, and finds herself longing for William. She returns to the forest, where they get back together. Meanwhile, William’s mother (the Queen), isn’t too happy about his relationship with the human girl, so he begs her for just one night with Margaret. As I can gather (some of the details are hard to determine exactly from the lyrics), she reluctantly agrees, but requires his life in return the next day as repayment for his debt to her. We’re next introduced to the second, and perhaps even more evil villain: the Rake. The Rake is a child-killing maniac (his own children, that is). The following lines from The Rake’s song recount this somewhat shocking development (all of the lyrics can be found in the digital booklet here):

Charlotte I buried after feeding her foxglove
Dawn was easy: she was drowned in the bath
Isaiah fought but was easily bested
Burned his body for incurring my wrath

Anyway, if his gruesome dispatching of his children isn’t bad enough, the Rake proceeds to abduct Margaret with the aid of the Queen. William sets out to rescue her, but is confronted by a raging river. The next events are a bit hard to figure, but the following I can make out. The Rake’s children come back in ghostly form to exact their revenge on their murdering father, and William manages to save Margaret from his fortress. However, on the way back across the aforementioned raging river, their boat sinks and and they die in each other’s arms. Not exactly the happiest of endings, but it is a folk-tale after all.

So, how do you go about reviewing an album that tells a story like this. First of all, in trying to piece together the story told in this album I read a bunch of review’s on-line that had it all wrong. It amazes me the number of “professional” music reviewers that can’t seem to listen to an album enough times to even know what the lyrics are trying to say (for example, see some of the lower-rated reviews here). An album like this cannot be reviewed conventionally, because the story is what it’s all about. Sure, it will be difficult to pull high-profile singles from this collection, but that’s not the point. The songs contained in The Hazards of Love are lyrically complex, vividly descriptive, and work best when listened to in the context of the whole story, and that is why I love this album so much. It’s a bit more like reading a book than listening to music, except in this case I have no problem listening to the story 5-6 times in a day (try that with most books and you’d go nuts). There are a few songs that work as stand-alones, and some of my favorites are The Hazards of Love 2, Isn’t it A Lovely Night, The Rake’s Song, Annan Water, and The Hazards of Love 4 (you can click the links or listen to clips of these directly in the Amazon player below). But to really get the full experience of this masterpiece, you need to listen to the whole package enough times for the story to sink in. When you do this, the last song (The Hazards of Love 4) becomes one of the rawest, most heartfelt, and most emotion-inspiring songs you will ever hear.

A last note about criticisms of their use of hard rock elements in this album. As I keep repeating, this album tells a story, and within this story the different characters are associated with particular lyrical and instrumental styles. The twangy electric guitar and “hard-rock” elements (though I’d really be hard-pressed to even truly call them that) denote the presence of the evil Queen, and that is why they’re there. The sound sets the mood and atmosphere, and the voice and musical accompaniment of the queen are supposed to sound scary and evil (so you’ll know she’s around- this is music for the ears and not a movie for the eyes after all).

So, would I recommend this album? Absolutely – this album has made me think more than almost any I have ever listened to. It pushes the boundaries of what a band can do in the context of a single record, and it explores new territory that many bands more interested in producing pop singles would never dare to enter. In many ways, this band is living what they sing – in the “olden days,” as my 5-year old son like to call them, stories used to be told through music, and the Decemberists do this better than almost any other out there today. Give it a listen – you won’t be disappointed.

Update 4-02-09: The live, in-concert debut of the The Hazards of Love in its entirety occurred recently during NPR Music’s official South by Southwest showcase. A live recording from the show, played on March 19, 2009 at Stubb’s Bar-B-Q in Austin, TX, is available to listen to for free in streaming form at the NPR Music website. Alternatively, you can download this concert in its entirety for free from Itunes by clicking here.

You can download this album in MP3 format from Amazon for $8.99 at the site below (Amazon is a dollar cheaper than Itunes – I use both services equally as often and Amazon music downloads sync into and play just fine in the Itunes player):

If you prefer a CD, here’s the Amazon link for that:

You just finished reading Music Review: The Hazards of Love, by The Decemberists! Consider leaving a comment!