My Favorite Running Partner is a Dog Named Jack 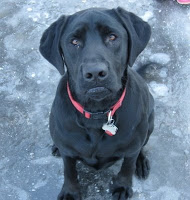 Recently, I’ve been spending quite a bit of time with a new running partner. He’s really been an ideal companion because he never complains about the weather (unless it’s really hot) or how far we’ve gone (more = better), and he seems to be able to read my mind when it comes to following a route – he generally knows exactly when to turn, cross the street, or stop for a break without my having to say anything. He loves trail running, particularly a trail down by the Merrimack River that we frequent, and he enjoys a good swim break. What’s more, he’s always ready for a run, and won’t let me hear the end of it if I try to skip one. In fact, on days that I don’t intend to run with him, he often whines to the point where I’m often forced to break down and hit the road.

With every running partner, there are always some quirks that you have to live with, and mine is no different. For example, he loves to swim but he hates puddles, and will stop dead if we encounter one on the road or trail (it’s particularly bad during spring snow-melt here in New Hampshire). This has resulted a number of times in me crashing into him, tripping, and landing in the puddle myself (soaked shoes are no fun when the temperature is in the 30’s). He also has problems keeping a steady pace, preferring rather to sprint ahead, stop, and wait for me to catch up while trail running (I guess he likes to fartlek). Perhaps the most annoying habit that my running partner has is that he can’t seem to understand that we would all be happier if he would take care of all bowel movements before we leave the house. No, he prefers to wait until about 1/4 mile into our runs, where he stops on a dime and relieves himself on the nearest patch of grass (a whole different kind of fartlek). As you can imagine, this is very embarrassing, and I imagine quite comical to watch if you happen to observe him doing his business and me standing nearby cursing under my breath while waiting for him to hurry and finish up.

Quirks aside, my running partner is as loyal as can be, and I’ll hopefully be running with him for years to come. His name is Jack (of the picture shown above), he’s a 90 pound black lab (composed of pure muscle), and he more than anyone else makes sure that I don’t skip out on my runs. For that, and although our relationship does have its rough patches, I will forever love him.