My Unexpected Connection to The Kip Litton Marathon Fraud Story

I just read a fascinating article in the New Yorker about a guy who has supposedly made a living out of cheating his way to sub-3:00 finishes in marathons around the country. Apparently Kip Litton has a habit of mysteriously finishing near the top of his age group in races despite other runners of similar pace failing to see him out on the course.

I was familiar with the name Kip Litton from the Let’s Run forums, but had never actually read any of the threads about him. However, for some reason the name seemed familiar to me, and I couldn’t quite put my finger on why. Tonight I figured it out.

The New Yorker article indicated that Litton had run sub-3:00 (2:54:06 to be exact) at the 2009 Manchester City Marathon here in NH. I also ran that race (in a much slower time), but it’s also the race that my students filmed for the foot-strike paper that I published back in 2011. Upon reading this, I knew that was where I had seen the name before. Part of the process of writing that paper involved me poring over Brightroom race photos to ID runners by their bib numbers, and syncing videos of runners at miles 6 and 20. Turns out Kip Litton was one of the runners for whom my students captured no video or still photos at either mile 6 or mile 20. We had either a video or still photo for 95% of the top 300 marathon finishers in this race, and his name stuck in my head because I had spent awhile searching through my videos for him. This doesn’t prove anything about whether his result in this race is to be questioned (he could just be one that we missed), but it’s interesting when something clicks in your head like this.

Consistent with what is written about his other races in the New Yorker article, Litton only has two photos taken by the official race photographers at Manchester (Brightroom), and both are approaching the finish line – none from earlier in the race. His Bib # was 195, and its hard to make it out in these photos, but they look like other pictures of him on the web. He was four minutes behind the woman in the photo at the half-marathon timing strip (she was the female winner of the race), and based on the race results Litton was the only finisher in the top 30 who ran a negative split. Manchester is a brutally hilly course, and running a negative split there is extremely difficult. 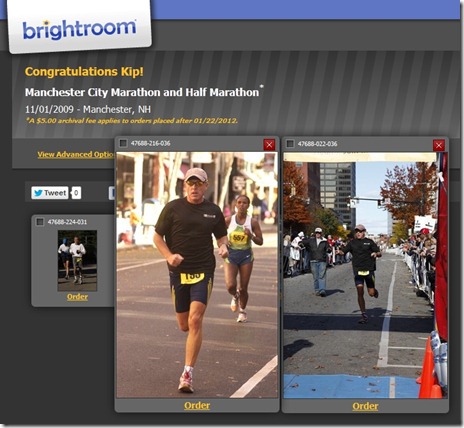 Anyway, not sure if any of this means anything, but I thought it was interesting when I made the connection to why his name was familiar to me. Check out the New Yorker article, it’s well worth a read!