Home / Blog Posts / Natural Running: What The Heck Does it Mean?

Natural Running: What The Heck Does it Mean? 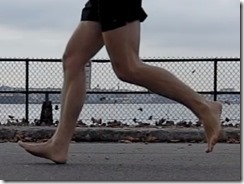 I get the sense that most people equate the phrase natural running with barefoot running, or at least running with a form similar to that which you would adopt when barefoot (shorter stride, increased cadence, more plantarflexed foot at contact, generally a reduced impact transient if not heel striking, etc.). I largely agree with this definition. However, I think there’s a bit more to it than this.

Understanding what natural running means is further complicated by the fact that it’s become increasingly common for barefoot and natural running to be equated with forefoot striking alone, whether that is the intended message of those teaching natural running form or not. Sometimes a 180 cadence and forward lean are tied in, but I’m not going to go there in this post or I’ll never stop writing…

In fact, when it comes to foot strike, Prof. Daniel Lieberman of Harvard emphasized variation when I interviewed him for my book. He said:

Let’s take a look at  a few videos from the 2011 NYC Barefoot run to further emphasize this point. When we think about natural running form, we tend to think of something that looks like this – short stride, forefoot strike, vertical shin at contact, etc.:

But, sometimes, barefoot running form on asphalt looks like the video below – is this natural running form?

How about this clip, which of these runners is exhibiting natural running form?

To a certain extent, I’d argue that all of the barefoot runners in the above videos are using natural running form. They are using the form that is working for them in their current situation, with zero assistance from footwear or other technology. That’s really how I would define natural running. It’s not some ideal, archetypal running form, it’s what happens when you let your own body figure out what works best for you when you minimize interference between the foot and the ground. It’s what happens when you let your own muscles, ligaments, tendons, and bones do all or most of the work. It will vary depending on the type of ground under your feet, how fast you’re running, and so forth. It could hurt you – just because it’s “natural” does not necessarily mean that it’s always good. It could also help you – some people have overcome chronic injury by going “natural.” It’s a form employed by you, not necessarily a form employed by all. And your natural running form can change with time and practice. It might reach a comfortable steady state, or it might continue to change in small ways.

The last point is an important one. The form employed by the barefoot runners in the videos above is their current “natural form” while running easy on asphalt, but it may not be the “best” form that they could be using given the situation. If they are inexperienced, their form may change over time as they continue to practice. There may be some residual baggage in the form of ingrained motor patterns from running “un-naturally” with the assistance of footwear for many years (and yes, for good or for bad, I absolutely believe that shoes, even minimal shoes, change the way we run). Practice may be a required element to finding one’s natural running form.

It’s worth considering, however, that given that the individuals in the above videos came to a barefoot running event (some traveled a long distance to attend), we might assume that they have at least some experience running barefoot. Furthermore, unless they jumped in after the race started, these videos are taken of people running a second loop around Governor’s Island (i.e., they had already run a few miles on asphalt). Maybe heel striking is “natural” for them.

Now that these videos are posted on-line, I fully expect the usual slew of YouTube comments telling the heel strikers that they’re idiots and they might die if they keep running that way. Will they break their calcaneus? Maybe, maybe not. Most are running with other hallmarks of barefoot running form – short stride, bent knee, etc., and we can’t tell what the forces acting upon them at contact look like from a video. If they are highly experienced barefoot runners without an injury history, I’d probably just tell them to keep doing what their doing. Embrace the heel strike! Their natural running form is working just fine. If they are inexperienced, some advice or coaching might help them along the way to undoing their neurological baggage and finding their natural form without getting hurt.

As a final point I’ll say that “unnatural” isn’t necessarily bad. I run the vast majority of my miles in cushioned shoes. I’m pretty sure my form would change a bit if I ran regularly barefoot. But, I haven’t been injured seriously in 6+ years of regular running, and I’ve never missed a target race due to a running related injury, so I’m not too concerned about my form. My wife has found that the only shoes she can run in without foot pain are Hokas. Sometimes a bit of help from a shoe can keep you going, and there’s no shame in that.

How about you, how would you define natural running?

You just finished reading Natural Running: What The Heck Does it Mean?! Consider leaving a comment!