New Balance 1400 v2 Review: A Candidate For Shoe Of The Year 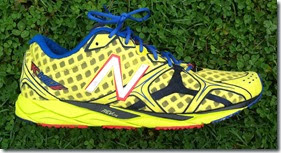 “The 1400 are what running shoes are pretty much supposed to be.  That’s not to say that shoes that aren’t like this are no good. I know they are. And not everyone can wear one model. But running is supposed to be simple. At some point we came to believe that our running shoes weren’t performance shoes if they weren’t, you know, all techied out and @$%#, because of, you know, marketing. But here’s the deal:  Really good design—really good design—doesn’t need all that stuff to be legit. It just doesn’t. We just think it does, maybe because we don’t have faith in ourselves, or know what good design is, I don’t know. But the New Balance 1400 v2 is almost—almost—exactly what you need, and nothing more.”

The New Balance MR1400 is a shoe that I’ve been long tempted by, but have resisted trying due to its relatively high heel-forefoot drop (9mm). My general experience is that most shoes over about 8mm drop don’t work well with my stride since I tend to be a midfoot to very mild heel striker. The higher heel can get in the way, and often catches the ground prematurely as I make contact. I had this experience recently with the 10mm drop Mizuno Sayonara – it’s a shoe that a lot of people seem to love, but it just did not work well for me and I gave up on it after a few runs (my friend Brad reviewed the Sayonara for me here).

I finally broke down a few weeks ago when the New Balance MR1400 v2 came out (the women’s version is the WR1400 v2). I had some credit at Running Warehouse from a previous return and the shoe ticked all of my boxes with the exception of the higher-than-preferred drop (note: this was a personal purchase, not a media sample). It also didn’t help that some of my shoe geek friends who share my preferences have been drooling over the 1400v2. I’m glad I took a chance since this is one of the best shoes I’ve run in so far this year! 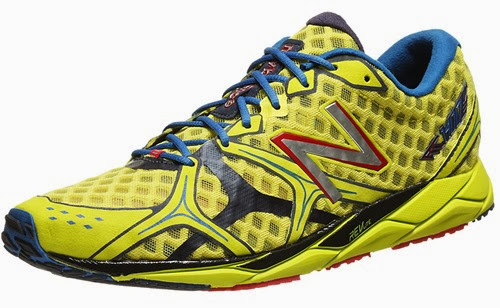 The 1400 is basically a racing flat with a bit of additional soft cushion under the heel. It’s super lightweight (6.4 oz in size 9) and simple in its construction, both of which are features I like in a running shoe. It also costs under $100, which is a huge plus these days.

When I first put the 1400’s on my feet my impression was that the sole was super cushy, particularly under the heel (I like a soft sole). The feel under the heel was somewhat reminiscent of the Newton Energy, which is another of my favorite shoes released this year. I was a bit wary of the heel lift, but it didn’t feel very prominent when I put the shoes on, perhaps because the soft heel allows the foot to sink in a bit more than in a firmer shoe like the Mizuno Sayonara.

A run would be the true test, and the 1400 didn’t disappoint. I’m not sure exactly why, but these shoes don’t feel like they are 9mm drop, even though my own caliper measurements agree with the 24mm heel, 15mm forefoot dimensions reported by Running Warehouse. For some reason this shoe stays out of the way from my stride in a way that the Sayonara did not. Like all perfect footwear matches, it disappears on my feet.

While the heel of the 1400 feels soft while walking, the shoe feels firmer while running since I tend to load from midfoot to forefoot (see my stride video in the shoe below). It’s a responsive shoe that I could easily use from the 5K all the way to the marathon. Though I’ve run a max of only about 7-8 miles in a single run in them, I would have no hesitation running in them for much longer distances (I’m not marathon training right now so no double-digit runs on my schedule). In fact, if I had a marathon on my schedule soon the shoe decision would probably come down to the 1400v2 or the Newton Energy.

As John Schrup so elqoquently puts it in the opening paragraph of this review, the beauty of the NB 1400v2 is its simplicity. The sole is simply a full-contact wedge of foam, and it has decent outsole coverage – plenty of rubber to provide durability. I’ve put my typical 30-40 pre-review miles on these shoes and no major signs of wear to the sole. There does appear to be a plastic shank/plate in the region of the midfoot to add stiffness to the shoe (you can see it through the diamond-shaped hole under the midfoot), and I think this contributes to its responsiveness.

The upper of the 1400v2 is a nice, breathable mesh with extensive welded overlays. Again pretty simply but it does the job of securing the foot down quite well. It’s composed of a plasticy kind of mesh that worries me with regard to forefoot tearing with long-term use, but I see no signs of an issue so far (unlike the NB 730 v2, which started to develop small forefoot tears with similar mileage on them). I think there are enough overlays to prevent any major blowouts.

One issue with the upper of the 1400v2 is that internally it’s very rough, almost sandpapery rough. This is not a shoe for sockless running, I didn’t even try it as I would guarantee some serious abrasion and blistering. Despite this, I have had no issues with hotspots or blisters while wearing thin socks.

In terms of fit, I opted for a 10.5 instead of my usual 10 to allow a bit of room up front since this shoe is not on the roomy Minimus last. I find the fit to be just right – not super roomy, and not tight. I feel no constriction at all, it just fits and stays out of the way. Perfect for a performance shoe.

The insole included with the shoe is thin and flat, and arch support is not obtrusive. The ankle cuff is nicely padded, and there is no real heel counter (though the New Balance logo on the back of the shoe is stiff and keeps the back of the heel from collapsing). 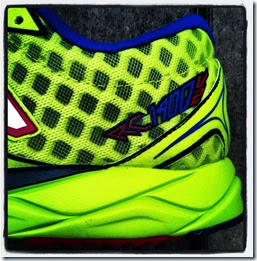 Rather than dwelling on additional details, I’ll simply say that this shoe works, and it works very well in a lot of situations. I’ve done intervals in them and they felt great – very responsive when running fast, just enough longitudinal stiffness for speed.

They also feel great on longer, slower runs, and for heel strikers or those who tend to have form breakdowns late in a race the heel cushion is ample. This is the kind of shoe that could be worn by a lot of different runners with very different styles and body types. I’d go so far as to say it’s a great starting shoe for a new runner – light, simple, and plenty of protection (I’m not a big believer in expensive, techy shoes with lots of stuff shoved into the sole). I’d rank it right up there with the Saucony Kinvara in terms of versatility.

If you can’t yet tell that I like this shoe, I’ll just say it flat-out: the New Balance 1400 v2 is everything a running shoe should be. I’m pretty sure it’ll be among my top 3 shoes this year, and it’s one that I highly recommend that you try!

The New Balance 1400 v2 is available for purchase at Running Warehouse, Zappos, and Amazon.com.

You just finished reading New Balance 1400 v2 Review: A Candidate For Shoe Of The Year! Consider leaving a comment!