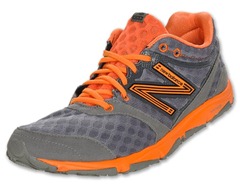 I thought I’d  drag my self from the depths of final book editing to give a quick update on my experience with the New Balance 730 running shoe. A few weeks back I wrote a post describing the New Balance 730 in detail, but at the time I had yet to run in them. I’ve now put in about 25 miles in the shoe, and my impression remains very positive.

In terms of performance on the road, the 730 has a very firm ride, and in that sense is reasonably comparable to road racing flats like the Mizuno Universe and Adidas Hagio. The 730 feels very much like a stripped down version of the original Minimus Road, and in my opinion is superior to that shoe in almost every way. It’s lighter, more flexible, and feels just as well constructed as the MR10. I haven’t done a long run in them yet (those have been few and far between for me of late), so can’t comment on that, but don’t see any reason why this shoe wouldn’t work well for that purpose if you don’t mind a firm midsole (note: my buddy Thomas over at Believe in the Run reports that he did a 22 miler in the 730’s, and that they felt great).

Because of the thin, firm sole, this is not a shoe that I would recommend for heel striking runners. On the other hand, these features combined with only a 3-4mm heel-forefoot drop (I still say it feels less, even though I measured it at 3mm…) make it a great shoe for a midfoot or forefoot striker. Although I’ve only put about 25 miles on them so far, I’m pleased to see that nearly all of scant wear so far is on the lateral midfoot to rear forefoot. The fit is great, though I do have a sense that it runs a bit small (I’d order a half size up if I were to order another pair), and the wide forefoot provides an ample amount of space for toe splay (and for those with wide feet, the shoe does come in 2E width!). I’ve managed two sockless runs in them so far, and have not had any blistering issues yet (a rarity for me).

One of the best things about the New Balance 730 is the price. It’s not easy to find a minimalist shoe these days that costs under $70, and this is one that performs very well at that price point. I see this as a great all around shoe for those who like a thin sole and a firm ride, and folks in need of a racing flat with a wide forefoot would also find this to be a very good option. Personally, I also see this as a near ideal casual shoe for just wearing around town – it’s flat, wide, and very comfortable for walking. So far so good with the NB 730!

The New Balance 730 is now available (in widths) at Running Warehouse, and is currently on sale at Shop New Balance for $64.95 with free shipping (see banner below).