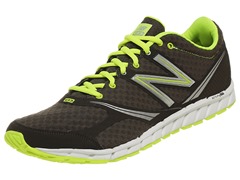 I really want to like New Balance shoes. They make a lot of shoes that fit right into my sweet spot, but I’ve had a lot of issues with shoe durability and construction over the past few years, and it has made me hesitate to recommend a lot of their recent offerings.

First, the MT10v1 had that forefoot band that impinged on my foot on one side and had to be severed (the band, not my foot). The MT00 sole delaminated after minimal mileage and I had read numerous reports of the upper tearing. The MT20 v1 was a total disaster in terms of durability – reports of upper tearing were rampant. The MT110 sole was so distinctly slanted from lateral to medial that it caused me to develop a case of posterior tibial tendonitis. The MR10 v2 was a nice looking shoe but the fit or the upper was incredibly baggy around the midfoot – I haven’t run in it enough to write a meaningful review. The upper of the MRC5000 started to develop small, superficial tears near the arch after minimal mileage. I injured my toe running in the MO80, though I can’t necessarily blame that one on the shoe. The MR00 and MRC1600 both worked pretty well for me, but I long for the days of the MT101, which was one of my favorite all around running shoes a few years ago.

One New Balance shoe that I did like a lot was the 730. It was simple – wide toebox and firm, low drop sole, no frills. And it was cheap. That latter characteristic is something I really appreciated in a world where shoe prices seem to be going through the roof.

Earlier this summer Running Warehouse sent me a pair of the 730 v2 to test out for a review (these were review samples and thus free of charge). It’s taken me a long time to write this review because I’m really conflicted about this shoe.

In most respects, the 730 v2 is very much like the original 730. It fits great on my foot – snug through the heel and midfoot, with a very wide toebox (it’s on the Minimus last, and even comes in 2E if you want maximum roominess). It has an integrated footbed (no insole) and no arch support, both of which are characteristics that minimalist runners will appreciate (Amazon reviewers, not so much). It’s comfortable enough to wear sockless, and works great as a casual shoe.

The sole of the 730 v2 is firm, and though Running Warehouse lists stack height as 19mm heel – 13 mm forefoot, it feels far flatter than 6mm drop to me. Given the firm sole, ground feel is very good. The sole is also amply covered by rubber, and I’m seeing very little sole wear after extensive casual use and about 35 miles of running.

For New Balance minimal shoe fans, I could perhaps best describe the experience of running in the 730 as very similar to the MR10 v2 or a maybe a road version of the MT110 – lots to like if you prefer wide shoes with thin, firm soles.

The thing I like most about the NB 730 v2 is the price. Though MSRP is $75, it can be purchased for under $60, making it that elusive “minimal shoe at a minimal price.” I so badly want to call this shoe a best buy or a great deal, but I have one big reservation.

So what’s the problem? Once again, it’s the durability bugaboo. You might say that one should not expect a low-priced shoe to be durable, but this one comes so close and the area where I see durability issues could so easily be fixed (and no shoe should develop issues after only 35 miles of running).

My problem with the 730 v2 has to do with the upper. When I first took the shoes out of the box I was immediately worried about the upper material – it had that cheap feel that some of the new synthetic meshes used in shoe uppers tend to have. I was concerned about possible tearing with repeated wear. Now, my shoes have not torn in a way that makes them non-functional, nor would most people even notice the issues on my pair. But, I’ve been hyper-vigilant given my initial concerns, and I’m seeing a few problem spots.

First, there are small tears developing on the medial forefoot, just above where the upper meets the shoe on both sides. In the top image below, it appears right above one of the flex grooves in the sole. In the lower image it’s a bit harder to see and is located a bit further back toward the arch: 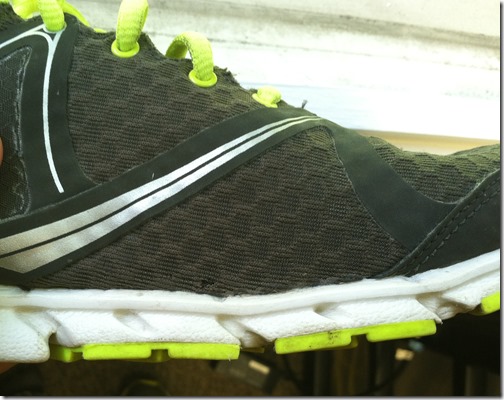 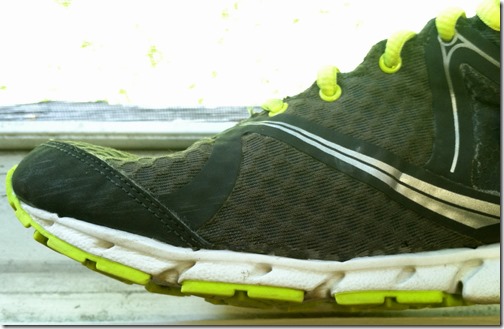 Neither of those tears compromise shoe function in any way, but they scare me since what starts as a small tear might become something more. And I’ve only run 35 miles in these. It’s quite possible that the mini-tears might not progress at all, but I thought it prudent to mention the issue in a review.

The other problem spot is on the left outer forefoot, and appears to be a location where the upper puckers/flexes during toe-off. It’s only on one side though. 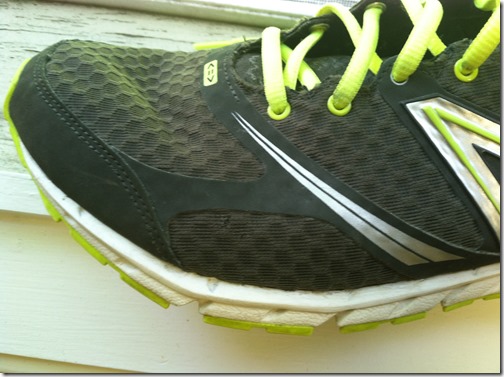 In an attempt to determine if others have reported tearing issues, I combed through the reviews on Amazon and Zappos and didn’t see a lot of mentions of the problem. Most people who did not like the shoes complained about the lack of support and the thin, firm sole (do your research people, the shoe is intended to be like that!). A few people did mention upper tearing or the shoe falling apart, but it was by no means widespread (but a lot of the reviewers on those sites are probably not running in the shoes).

New Balance has come so close to producing a great shoe at a low price, and simply using a more durable upper mesh would make this a top recommendation for minimalists. I’m just not sure I can recommend it strongly without knowledge of how the upper issues will progress (if you have used these and can report either way, please do so in the comments!).

I’d conclude that this is a case of buyer beware. The 730 v2 is not a huge investment, and if you buy them and they fall apart with minimal mileage I’m sure the retailer or New Balance would exchange you a new pair if you contact customer service, thus further reducing risk. It’s also possible that my issues are unique to my stride or that the upper will hold up just fine with continued use (i.e., the small tears are just a cosmetic issue). I do wish New Balance would invest more time in quality control and durability of their minimal models, I’ve had too many hiccups with their shoes and it’s for that reason that I totally passed on the Hi-Rez (which would normally be a shoe I’d like to try). I love the fact that they support the minimal-leaning consumer, I just need to know the product being produced is going to hold up over the long-term.

The New Balance 730 v2 is available for purchase at Running Warehouse.