Sometimes the running gods can be cruel.

Yesterday I wrote a post on how to avoid chafing while running. One of the anti-chafe products that I recommended is called Hike-Goo, and after I wrote the post I emailed my contact (Vito) to let him know that I had finally managed to try it.

Vito responded by informing me that although the product can work for chafing, it’s primarily intended for use on the feet to help prevent blistering inside shoes/boots. I responded that I almost never get blisters on my toes anymore since I have moved to shoes with more accommodating toeboxes.

Less than 24 hours after claiming that I never get blisters on my feet anymore, I now have a giant blister on the inside of the second toe on my right foot.

The cause of the blister was a 16 mile run this morning in the New Balance Fresh Foam 980. The 980 is a bit of an enigma, and I’ll have more to say about it soon (Update 7/15/2014: you can now read my full New Balance Fresh Foam 980 review here), but one of the things that I don’t like about it is that it has a pronounced taper at the tip of the toebox. It’s not a terribly narrow shoe across the forefoot, but the front of the shoe tapers too abruptly to a point (see photo below), and the upper has minimal give/stretch (I even went a half size up to create some extra space).

The abrupt taper on the inner side pushes my big toe into contact with the second toe, and I started feeling discomfort about halfway through the run today. By 10 miles I knew that a blister had formed (I ran 8 in them earlier this week without trouble, but it was a hot day and I wonder if sweat helped reduce friction between my toes?). When I took off my shoes at the end of the run to inspect the damage I found a blister that ran almost the entire length of my second toe. It reminded me why I no longer run long in shoes with pointy toeboxes. (note: I think my right foot is a tad wider than the left, and my blister issues have always been on that side). 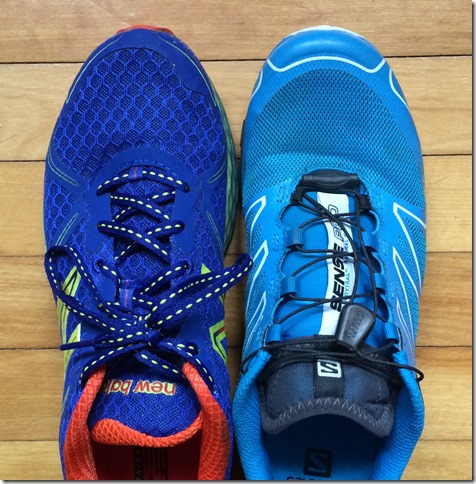 What’s interesting about this is that the Fresh Foam does not feel particularly tight. I run comfortably in shoes that are much snugger without issue – the Salomon Sense Pro in the photo above being a good example. But where the Salomon succeeds and the Fresh Foam fails is that the former has a more squared-off toebox that allows more room for my big to to spread out medially. The Fresh Foam just scrunches the toes together.

Unfortunately, pointy toeboxes seem to be a trend with some recent New Balance shoes. I recently purchased the New Balance MT00v2 and wound up returning them because they had a similarly tapered toebox. Nate got ahold of a pair of the NB MT110v2 and told me that it’s a great shoe hobbled by a lousy fit. I’d love to see the Fresh Foam on the Mimimus last since there are things I really like about the shoe (the 16 miles today were great but for the blister), but the fit is going to limit their use to shorter stuff from here out (with copious application of lubricant on my toes). And they probably won’t remain in the rotation once I get a review up.

If there is one tenet of minimalism that I strongly support it’s that the toes should be allowed space to splay and spread out inside the toebox of a shoe. If nothing else, this helps prevent blistering since squeezing the toes together can cause friction due to skin-skin rubbing. Shoes with pointy, tapered toeboxes are not fun to run in over long distances, and regardless of where you stand on minimalism, I think most people will agree on that.