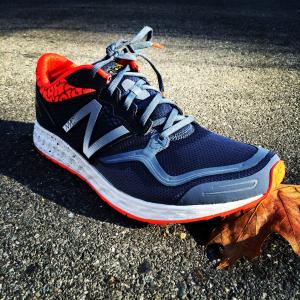 Earlier this year I reviewed the New Balance Fresh Foam 980. It was an interesting shoe in that it was far more responsive than the marketing associated with the shoe would have suggested. The 980 was firm, not soft and foamy, and I liked the ride. Unfortunately it suffered from a cramped toebox that left me with toe blisters on longer runs. I’d heard rumors that New Balance would be addressing the toebox issue in future members of the Fresh Foam line, and I was excited to hear that one of the next releases would be a lighter, speedier model called the Zante.

The Zante is the third addition to the Fresh Foam collection (the FF Trail was released earlier this year). The Zante isn’t actually going to be available widely until next year (now available at Running Warehouse), but they released a special edition version of the shoe for the NYC Marathon. I purchased a pair and have put enough miles on them now to share some thoughts.

To get an idea of how New Balance is positioning the Zante, here’s an excerpt from the description on their website:

“The Fresh Foam Zante NYC fits like a supportive sock, hugging your arch while allowing your toes to spread out comfortably. Compared to the original Fresh Foam 980, it’s sleek fit feels more like a racing flat. The toe spring helps the shoe look fast and feel fast, assisting with the quick transition of the foot from heel to toe.”

Unlike the marketing for the 980, I’d say they are pretty spot-on in describing the Zante. It’s like a sleeker, better fitting version of the 980, and I’ve really enjoyed running in them.

Compared to the 980, the both the upper and fit of the Zante are much improved. The front half of the upper is composed of a stretchy mesh that feels quite soft and stretchy. This allows for a much greater degree of toe wiggle than in the toe squishing toebox of the 980. It also feels as if there might be a tad more room up front, and the fit is near perfect on my average width foot (I did go a half size up as I did in the 980).

There is minimal structure to the upper over the forefoot, just a few welded overlays. One possible point of concern is that I am seeing some tearing of the upper just in front of the arch on my right foot (see image below). In fairness, I’m not sure if this is due to wear and tear from running, or if I might have snagged the upper on something. There is no evidence of tearing on the left shoe. I’d be interested to hear if anyone else has experienced this? I’m hoping I just snagged it as I’d hate to see an upper flaw ruin an otherwise solid shoe. 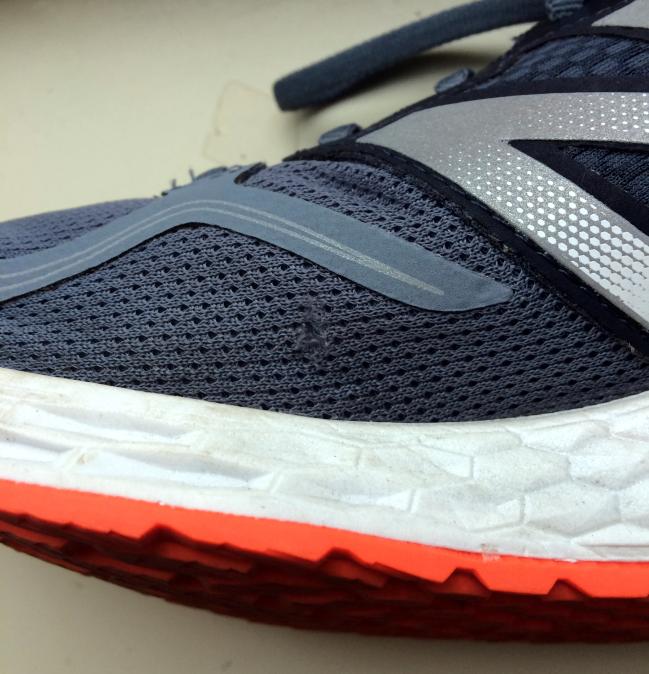 The back half of the upper is slightly thicker and more structured, and the heel counter, though present, is soft and very flexible. Internally, the Zante is soft and comfortable. I haven’t tried running sockless in them, but I’d be willing to try once things warm up where I live.

The tongue of the Zante is attached to the upper on both sides, giving the shoe a bootie-like construction. It hugs the foot nicely, and I’d have to say that this is one of the best uppers I have seen on a New Balance shoe in awhile.

I also want to add that I really like the look of the Zante – it’s not a flashy shoe, but the upper has a really nice design and the NYC colorway is pretty sweet.

This is where things get interesting. I’ve talked to a few other people who have run in the Zante and the comparison I am seeing frequently is a a cross between the Pearl Izumi Road N1 and the Saucony Kinvara. My initial thought was a cross between the Skechers GoRun 1 and the PI Road N1. The reason being is that it has the firm sole feel and smooth transition of the Pearl N1, and a midfoot bump and upper reminiscent of the Skechers GR1.

One of the first things I noticed upon putting the shoes on my feet was the distinct midfoot bump. Some might call it arch support, but to me it feels more like a bump or ridge that extends across the width of the shoe under the arch. In this sense it’s like the GR1 or maybe the original Brooks PureConnect (the PI N1 even has a bit of this type of feel). It was a bit disconcerting at first, but like the bump in the GoRun the sensation went away after running in them a bit. You will feel it while standing in them, but it has been a non-issue for me on the run. 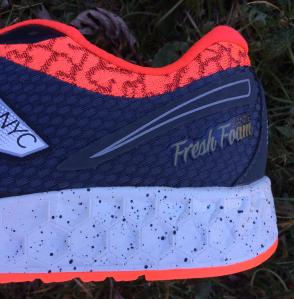 My first run in the Zante was on a very cold day, and I felt that the sole was very firm, much like that of the 980. After running in them in a variety of temperatures for the following several weeks I’ve come to think that the Zante is a tad softer than the 980, moreso under the heel (as with most shoes, the sole feels firmer in the cold). The midfoot through forefoot are firm and responsive, and unless you are a heavy heel striker that’s probably how you’ll describe the Zante experience. However, when forcing a harder heel strike (I’m a light heel striker) I was better able to feel the softness of the heel and the smooth transition from heel to forefoot. I think the Zante will appeal to both types of runners, and it’s interesting how different the ride feels depending on how you contact.

The outsole of the Zante is full coverage rubber – as a result, I expect durability should be decent.

The New Balance Fresh Foam  Zante is the kind of shoe that will work well when you pick up the pace due to the firm and responsive forefoot, and it’s also well-cushioned enough to handle longer runs. Overall it’s a very versatile shoe that should appeal to a wide range of runners. If the upper tear on my shoe is not a widespread issue I’d rank it among the better shoes I have reviewed this year. I highly recommend the Zante!