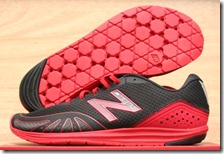 New shoes are bad for me – I simply can’t resist running in them. This contributed to my trouble last weekend at the Manchester City Marathon as I ran the race in the Saucony Grid Type A4 flats – it was only my third run in them, and they were too little shoe for my level of fatigue and the difficulty of the race. As a result, I seem to have strained something in my left foot (I’m guessing the tendon of the peroneus longus), and I took the past 5 days off of in the hope that it would heal up.

Well, as I reported yesterday, a surprise package containing a pair of the New Balance Minimus Road shoe arrived on my doorstep, and I felt pain-free enough today to take them for a test drive. I simply couldn’t wait to try these shoes out, so I headed out with a plan to run five miles. I made it about 2.5 miles when the left foot pain flared up again, and I nearly bagged the run and walked home. I hopped onto the grass/dirt next to the road and the softer surface seemed to help, and the pain subsided enough for me to finish off the run. So, turns out it probably would have been wise to take a bit more time off, but like most runners I have my moments of stupidity and bull-headedness, and new shoes are often a big contributing factor (I’m like a kid in a candy store when new shoes arrive!).

What I want to do here is to give my initial gut reaction to running in the Minimus, and I relate the above story so that you know the conditions in which I ran in them. I was not 100%, and for about a half-mile in the middle of the run I was lucky if I was 10%. Nonetheless, I got a decent feel for what the shoe has to offer, so here goes. 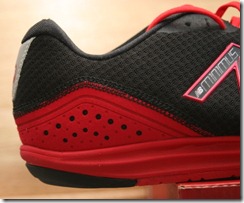 It was very easy to run midfoot in the Minimus Road, despite the fact that it does have a slight heel lift (about 4-5mm). I’m beginning to think that there are more factors than just heel-toe drop that make a shoe better at encouraging a midfoot strike, and one that I am really curious about is the shape of the heel. The Minimus has an undercut heel (see picture at left), meaning that when you look at it from the side, the heel actually angles a bit forward below the upper rather than coming straight down or flaring out backward. This better matches the actual shape of the human heel, and I suspect by removing any heel flare it makes it harder to catch the heel as the foot contacts the ground. The only other shoe I have that has a heel shape like this is the zero-drop GoLite Amp, though it is a bit less pronounced in the Amp. You can feel the difference that results from having an undercut heel, and my early sense is that it does make it a bit harder to heel strike while running in these shoes (heel shape is an area of shoe design that will receive some attention in a future post – it’s a new fascination for me).

The inside of the Minimus is very comfortable, and arch support is minimal (see picture below). There was an initial sensation of a raised area across the shoe just in front of the heel, but this seemed to go away during the run and was probably a result of a thin layer of padding in the heel of the shoe. There is no insole, just a layer of fabric, so the padding cannot be removed. 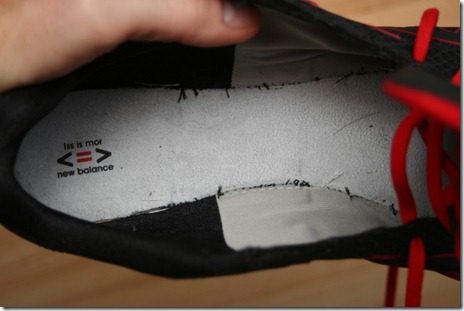 It will be interesting to see how the outsole of the Minimus holds up. There is a patch of black rubber on the heel (see below), but the rest is a uniform layer of what feels like some kind of sticky rubber with little hexagon-like shapes on it. There are some areas with little pits that extend under the outsole, and I did catch one pebble in one of these.

That’s most of what comes to mind after just a single run – hoping my foot heals up so I can log a few more and keep you updated on my thoughts! In the meantime, below are a few more pictures: 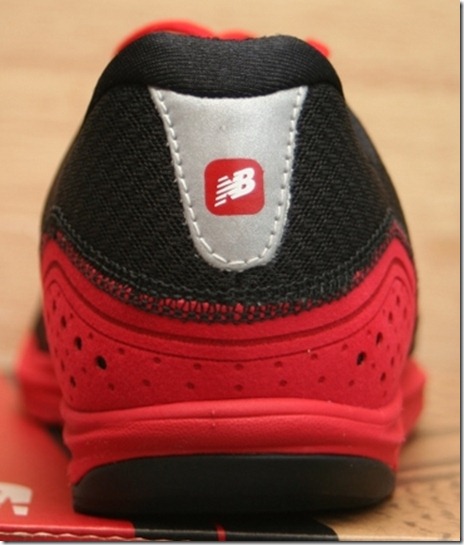 Note the lack of any medial or lateral heel flare in the Minimus Road. 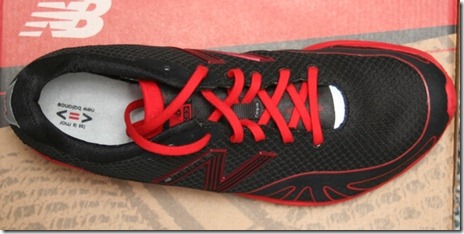 In the above picture you can clearly see how wide the forefoot is. 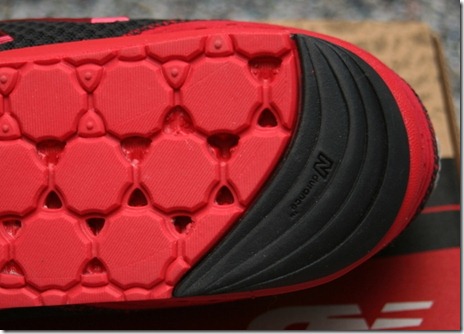 Closeup of the outsole under the heel.