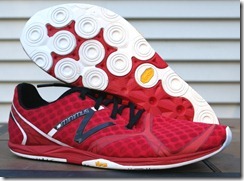 As I’ve slowly been building my mileage back up after a long period of low volume running, I’ve found myself way behind in writing up shoe reviews. One of the shoes that I’ve had for quite some time now is the New Balance Minimus Road Zero (MROO). I’m not sure exactly how many miles I’ve put on them, but it’s a fair amount, and I just did a ten miler in them earlier today. All in all I’m quite a big fan of this shoe (disclosure: these shoes were media samples provided free of charge by the manufacturer).

Weighing in at just over 6 oz, the MR00 is both lighter and more flexible than the original Minimus Road (MR10) – in my opinion it is far superior shoe. With only 12mm of sole underfoot (the shoe is zero drop), the MR00 keeps you close to the ground, but there is just enough cushion to take the edge off. I’ve come to very much like zero drop running shoes with a bit of cushion, and this one fills that niche nicely. I ran a fast 7 mile leg of a Ragnar Relay in them back in January, and found that there was plenty of cushion for speed. They also handled my 10 mile run today quite well – I was especially pleased about this given that it was my first double-digit mileage run in a few months.

The fit of the MR00 is excellent on my feet, which have grown very intolerant of any shoe that is even remotely too narrow. The upper is lightweight, lacks any structural elements beyond a few overlays, and is plenty breathable.The heel and midfoot fit snugly (the midfoot could even be widened just a bit), but the forefoot is expansive, leaving my toes plenty of room to spread out. The interior is nicely finished, and this is a shoe that causes me no problems when I decide to go sockless – this is a rarity for me, and is a huge plus. I have read some complaints on-line about the raised “rim” that has formed around the margin of the non-removable sockliner – this seems to be caused by the way the sockliner was stitched in. I can feel this under my medial arch while standing in them, but it has caused me no trouble while running, so for me it is a non-issue. Though the midsole does curl up a bit under the arch, there is no real arch support in this shoe (note that I am not generally sensitive to arch support, so others may disagree). 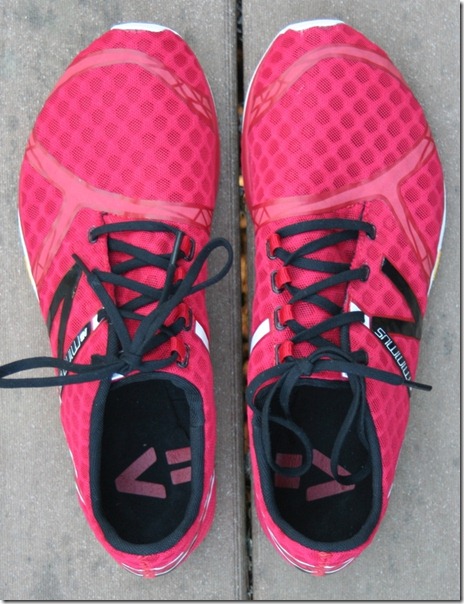 Having now run in and reviewed a large number of shoes over the past several years, I often find myself comparing each new shoe to those that I have worn previously. I find a lot of similarity in feel between this shoe and the Mizuno Universe 4. The MR00 is flatter and maybe just a tad wider in the toebox, whereas the Universe is a few ounces lighter and considerably flashier (this could be good or bad depending on your personal preference), but not as comfortable for sockless running (the faux-leather heel liner is problematic for me). Both are flexible and ride close to the ground, with just enough cushion for speed work and longer runs. Both are among my current favorite shoes. 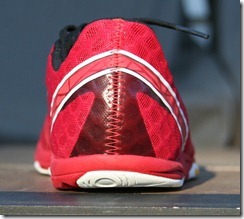 I’ve grown to really like the New Balance Minimus Road Zeros. Given my experience with this shoe so far, I’ve found it to be a rather versatile road shoe. It works well for speed, and it handles distance nicely as well. Not sure if I’d choose it for marathon distance, but then it’s been a year since I’ve run 20+ miles in one run, and I’ve been running more and more in zero drop shoes of late, so I would no discount the idea. The MR00 is also going to see a lot of use for me as a casual out-and-about shoe. I’ve been zero drop pretty much 100% of the time when I’m not running for over a year now, so having more options like this shoe for everyday wear is appreciated. I highly recommend the New Balance Minimus Road Zero.

The New Balance Miminus Road Zero is available for purchase at Running Warehouse.