A few months ago I wrote a post detailing how my glowingly positive initial thoughts about the New Balance Minimus Trail shoe had been tempered by two consecutive runs in them during which I suffered some nasty iliotibial band (ITB) pain. They were the only two runs I can recall in the past several years where my ITB has hurt, they were separated by a month’s time, and the surfaces run on were very different (treadmill and road). I was left to conclude that the shoes were messing with my gait in some way, and I suspected that it might have something to do with what I think is a manufacturing defect in the right shoe (although my pain was on the side of the left knee – go figure…).

My problem with the shoe was that the black metatarsal band that crosses the forefoot just in front of the laces (see yellow line in picture at left) was way too tight, causing it to compress the joint at the base of my pinky toe, which in turn caused hard pressure and pain at the base of that toe (on the top in the area of the red circle in the image above). This was disappointing because in all other respects I really like this shoe. Now that the Minimus shoes are available in stores, I have received several questions from readers about whether I have done any additional running in the shoes. The truth is, I hadn’t run again in the Minimus Trail, nor have I run much in the Minimus Road – the former because I didn’t want to risk an injury, and the latter mainly because I’ve been running on snow and lots of ice since December, which demands more traction than a road shoe can provide.

Given that I had no plans of running again in the Trail shoes because of what I perceived to be a genuine flaw, I figured it was a good chance to overcome my aversion to dissecting shoes (I need to get over that, I am an anatomy professor after all…). I got out a Swiss Army knife and commenced an operation on the metatarsal band – my thinking was that if I bisected the band near where the pressure was occurring, it would allow additional stretch of the orange forefoot fabric, and this might alleviate the problem. The end product is shown below on the right: 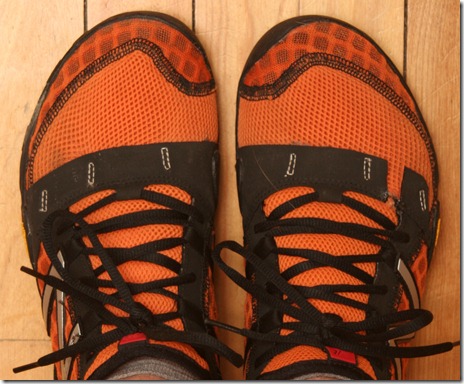 The shoes above are photographed with my feet in them, and the gap you see in the band on the right is entirely due to stretching of the forefoot material by my foot after making a single straight cut through the band – in other words, that gap is how much additional slack my foot needed. A little Loctite fabric glue was required to ensure that the stitching between the forefoot material and tongue did not separate completely (I’m hoping it holds). After putting the shoes on I could immediately tell that the pressure on my pinky toe was gone, and that the problem had been fixed. The right shoe now feels more comfortable than the left shoe, and I may repeat the operation on the other side – the tightness of the met band is my only big complaint about the Minimus Trail.

I was confident enough in how the shoes felt after surgery that I decided to give them another try earlier today. I ran 4+ miles at 7:59 min/mile pace and felt no discomfort in my left ITB. I can’t say for sure that this modification is what solved the Minimus related ITB pain problem, but it’s interesting to think that it required surgery to fix the issue, only the surgery was on my shoe and not on my knee.