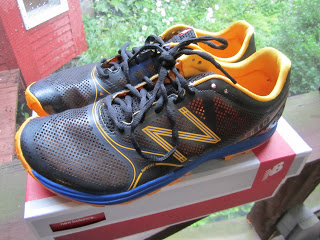 Nate Sanel is a fellow NH runner, and quite possibly a bigger shoe geek than I am. He also has quite the running resume – over the past few months he’s completed three 100 mile races, with more to come. So far, his list of finishes this summer includes Western States, the VT 100, and Leadville. Still to come are the Bear 100 in Utah/Idaho, and the Run Across New Hampshire. I’m hoping to join him for at least a portion of the latter, but have nowhere near the endurance needed to run 100+ miles right now – maybe someday!

Earlier this evening Nate sent me an email indicating that he has put up a review of the forthcoming New Balance MT110 (set to be released in January 2012), and offered to let me repost it here on Runblogger. I’m a big fan of the NB MT101, and am very much looking forward to giving the 110 a try. Below is Nate’s review, and you can find the original MT110 review over on Nate’s blog, Biker Nate. 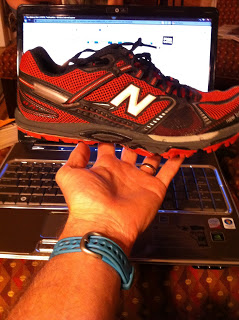 This winter New Balance posted on Facebook that they were looking for Ultra runners to participate in a focus group. I emailed back with my running resume and was invited to participate in the group. A few weeks later I gathered up 4 pairs of running shoes, including one pair of NB’s that I modified to drop the heel (see photo to right) and headed to Boston for an evening meeting.

I didn’t know what to expect, but was greeted by a team of NB designers, marketers and executives to discuss what hardcore Ultrarunners wanted from their shoes. I felt like a dork bringing 4 different shoes, but was pleasantly surprised to see that every other runner brought a minimum of 2 pairs. Most brought at least 4 like I did.

I was seated next to Bryan Gothie who is an Outdoor Product manager. When it was my turn to describe my ultimate shoe I said that I wanted a shoe that was flexible, lightweight, drained well, less than 4mm heel drop and had enough protection to run 100 miles. Bryan smiled and said, “Wait until you see what we are building for Anton, I think your going to like it”.

It turns out that they were talking about the NB MT110, the next generation of the MT101. Recently Bryan sent me a pair of the early production MT110s. I am blown away by what they have produced. As much as I enjoy my beloved Altra Instincts, these might be the best shoes I’ve ever worn. 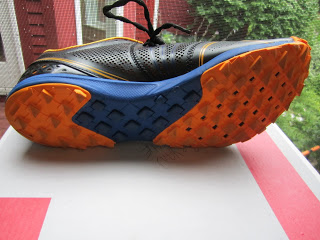 I received them the week before Leadville and ran every daily run in them. The longest run I did in them before the race was only 7 miles but I decided to start Leadville in them and then simply change out of them when they became too “thin” or if I had problems.

Here is the short story…  I ran the first 70 miles of Leadville in them. I had zero blisters. That’s right, zero. Long time readers of my blog will know that my biggest problem with running 100 mile races is that I suffer terrible blisters. I have always said that if I could just find a way to avoid getting blisters I would enjoy these races soooo much more. 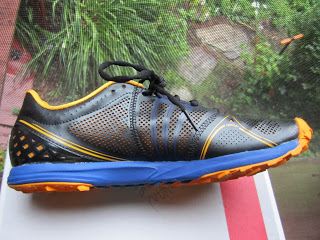 The best description I can give for these shoes is that they simply disappear on my feet when running. I feel like I’m running barefoot, but don’t have any of the issues I normally have with “barefoot” running shoes. I love the way the NB minimus feels on my feet, but the Vibram sole is simply to firm for me to run longer than 15 miles. I get numbness in my toes and wish I had more protection when running rocky trails. I know some barefoot guys get all uppity about “feel” with their barefoot shoes, but frankly I think that rocks hurt. Call me a sissy, I don’t care.  I never had to pussy foot over rocks with these shoes. I have been searching for a perfect balance of barefoot feel and all day protection. The MT110s have it.

Here are some of the technical specs for the shoes. 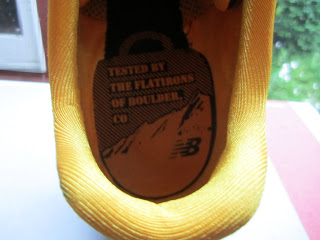 Nice soft heel cup that disappears when on your foot.

My only complaint with the shoe was that a fair amount of grit and dirt got into the shoe. It would be awesome if it had a lasted tongue to keep the grit out. I found the shoes a tad bit thin for the full 100 mile distance, but that might also be my feet not being used to them. I would never even consider wearing a traditional barefoot shoe like the Merrell or Five Fingers for a 100, so don’t think I’m one of “those guys”.

I would call my first long distance (70 miles) run in these shoes to be nothing less than a miracle.  No blisters, perfect comfort, enough protection to go flying down the rocky backside of Hope MT at full pace, and incredible fit.  I saw a ton of people wearing MT101’s at Leadville. I felt bad for them. These shoes are so much better.

No shoe is perfect, these are pretty damn close.