A contributor on the Runblogger Forum just posted a link to the spec page for an update to the New Balance MT110 trail shoe at Running Warehouse. Given the steep discounts I’ve seen lately on the original MT110 (on sale for under $50 at 6PM.com

), I suspected that some kind of sequel was on the way, and my hope was that New Balance would address what for me was a fatal flaw in the first version. (note – when I initially posted this I referred to the shoe as the MT110v2 – per David Henry’s comment below it appears this is a minor update to the MT110 and not a v2).

The original MT110 had al the makings of a near perfect hybrid trail shoe – roomy forefoot, light weight, low riding, and suitable for both on and off-road use. However, I had issues with them almost immediately due to a buildup of the lateral outsole under the forefoot that made my feet tilt inward just standing in the shoes. After a 10 mile trail run in the 110’s I developed soreness in my posterior tibial tendon (the tibialis posterior muscle is responsible for supporting the arch and resisting the inward roll of the foot after contact). This was a pain I had not experienced before, and I’m convinced that the shoe caused the problem. I shelved the shoes, the pain went away, and I haven’t run in them since.

Another issue I have seen reported is that the upper of the MT110 had a tendency to tear if it got caught on something along the trail, so durability was a bit of a concern as well. 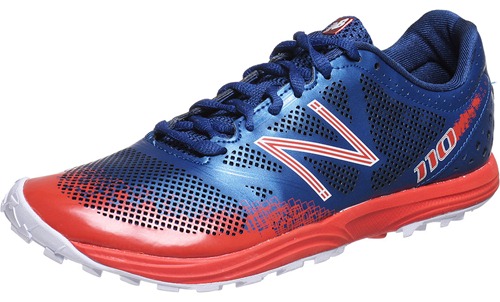 Running Warehouse describes the MT110 update as getting “a slick new look with a reworked upper and outsole.” Details are not provided on what exact changes were made, but my hope is they addressed both the lateral sole buildup and the upper durability issue. Update – per David Henry in the comments, Anton Krupicka has written on his blog that this shoe is “basically a color-update this year with an adjustment to the lateral forefoot to make the forefoot platform more level/neutral.” IRunFar reports that the lateral sole has been dropped 1mm in this iteration – good news, we’ll see if it’s enough to resolve the problem.

In comparing my original 110’s to the update images, it does look to be the exact same shoe with a cosmetic update to the upper (specs are the same – 7.7oz, 18mm heel height, 14mm forefoot height). I can’t discern any structural differences from the photos, but shaving the lateral forefoot lugs down by 1mm would probably not be noticeable in the photos.

Have a look for yourself at the comparison photos below – if you have any insight regarding other structural updates in the new MT110, please leave a comment!