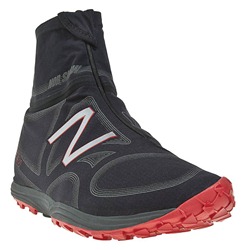 The New Balance MT110 is a trail shoe that held  lot of initial promise for me, but was done in by a sole that was overly built up under the lateral forefoot. This caused my feet to tilt inward simply standing in the shoes, and led to a bout of posterior tibial tendonitis after a long trail run. It seems that the extent of the lateral buildup was somewhat variable, and some people found it very noticeable, whereas others did not find it to be a problem. As an example, my friend Nate loves the MT110, but when he tried my pair on he noted that it was markedly more slanted than his. If nothing else, this confirmed to me that I’m not crazy.

I’ve wanted to give the MT110 another try, and I have heard that the lateral buildup is reduced in the update that was recently released. But, instead of the update, I asked New Balance if I could review the MT110 winter shoe for them since I’ve been dealing with some nasty running conditions here in NH this winter (disclosure: the shoes reviewed here were provided free of charge by the manufacturer for review purposes).

The MT110 has been around for awhile now so I’m going to cover the sole very superficially here – as far as I can tell, the MT110WR sole is identical to that on the MT110. The sole is 4mm drop (18mm heel, 14mm forefoot), and feels pretty firm underfoot. The outsole is studded with diamond-shaped lugs that provide decent traction, and protection is good due to the presence of a rock-plate in the forefoot. The most important thing to me is that the lateral buildup in this shoe is considerably less prominent than in my original pair of MT110s – I’ve run up to 8 miles in them with no problems. This gives me great hope that the MT110 update has indeed fixed this problem for good.

Fit is the same as the standard MT110 – snug through the heel and midfoot, with a very roomy toebox. Weight is listed at just under 9oz in size 9. 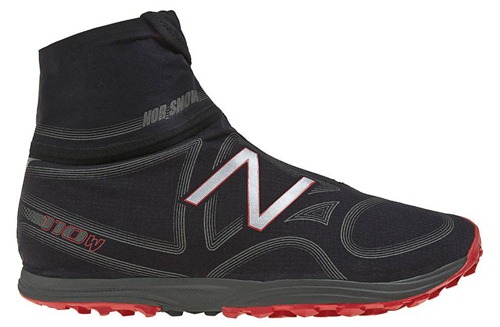 The major selling point for the MT110WR is the waterproof bootie that wraps the upper of the shoe. Internally, the shoe is basically a yellow upper similar to that on the regular MT110. The bootie consists of waterproof fabric that wraps outside the upper and zips up above the laces to the ankle. The fit around the ankle is fairly tight, but I have not found it to be constricting or uncomfortable. It’s actually a pretty impressive design (Nate posted some great pictures of the bootie construction in his review of the MT110WR).

The bootie is non-removable, which means that this is a shoe that will probably only get taken out when conditions warrant its use. Those conditions would include wet trail runs, snow, slush, and perhaps as an alternative to a traditional gaiter on a run where trail debris might be an issue. I have used the MT110WR mostly on slushy, wet winter runs here in NH. 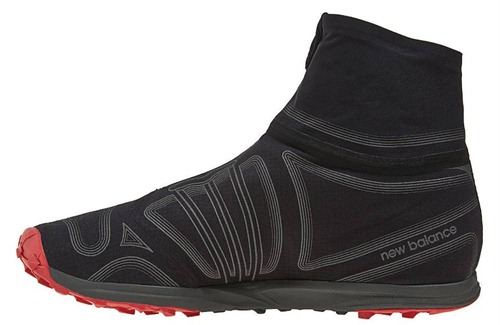 So the big question is how well does this shoe protect you from the elements? My verdict is that it does a pretty good job. One of the problems with waterproof running shoes is that if you waterlog them, water tends to stay inside creating a sloshy mess. The beauty of the bootie design is that it creates a tight seal around the ankle to prevent waterlogging. The MT110WR will not keep you completely dry if you submerge your foot (I intentionally tested this) – water does leak in through the zipper, but it does not gush in quickly (more of a slow leak). But, because of the bootie, water that gets in warms up quickly and I barely noticed my socks were damp until I took the shoes off. If you aren’t planning on submerging your feet, these shoes will likely keep you dry in all but the worst conditions.

I’m going to keep this review short since my real goal here was to put the shoe to the test in wet conditions – it exceeded my expectations. It’s not fully waterproof, but if you’re looking for a shoe that will keep you dry when it’s nasty out, these will do the trick quite nicely. And, they provide sufficient traction for running on snowy, icy surfaces. This combo makes the MT110 a great choice if you are looking for a dedicated winter running shoe.

Given that winter is coming to a close, you will likely be able to find these on sale soon. Indeed, The Clymb has just added them to a New Balance flash sale that started today – you can get a pair for $74.98 ($50 below MSRP).

For another take on the New Balance MT110WR, check out Nate Sanel’s review.