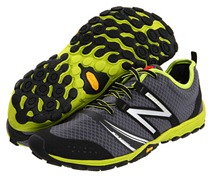 I’ve now had the MT20v2 for several months. I’ve done a number of runs in them, and have worn them pretty extensively for both casual wear and for a bit of hiking. Overall, my experience with the shoe has been great, and I was prepared to write a review claiming that the MT20v2 was a dramatic improvement over the original New Balance Minimus Trail MT10 (which gave me trouble since the forefoot band was too tight). For reasons I’ll get to below, I’m now not so sure that I can do that.

Much like the original Minimus Trail, the MT20v2 is a low profile trail shoe without a rock plate, and it has flat lugs that make it suitable for both road and light trail work (i.e., a hybrid shoe). I measure its stack height at 13mm heel:9mm forefoot, so it’s a 4mm drop shoe just like the MT10, and it weighs in right around 6.5oz in my size 10. The toebox is incredibly spacious, probably one of the roomiest I have worn recently. Comfort is excellent, and the shoe looks fantastic.

I’ve actually quite enjoyed my experience so far with this shoe. It runs great – super flexible and just enough cushion to take the edge off on the road while still feeling like a very minimal shoe. I also used it as a hiking shoe on a trip up to northern NH, and it performed exceptionally well for that purpose as well (in my experience less sole stack height = less likely to roll an ankle). Lately I’ve use it a lot for casual wear, and have even worn it to work a number of times. For all purposes it has worked phenomenally well, though I would not recommend it for running on rugged trails since it is not terribly protective. In fact, my only complaint about the shoe is that the margins of the tongue tend to curl, making it hard to get the tongue to lay flat when lacing them up.

So what’s holding me back from recommending the MT20v2?

Last week I was asked on the Runblogger Forum to recommend a shoe for hybrid road/trail use. The New Balance MT20v2 came up as an option, and I initially supported the choice due to my positive experience with them so far. In the ensuing discussion, it came up that reviewers on Amazon and Zappos

have been having some serious durability issues with the MT20v2. The problem seems to be with the synthetic upper material – it has been tearing at flex points in the forefoot, particularly by the little toe. In some it seems to have happened after very little use. There are enough reports of this happening that I’m hesitant to recommend purchase of this shoe (in fact, it is now on sale for $20 off at Zappos,

not sure if it’s related to the defect). In fairness to New Balance, I have not yet experienced this issue in my pair, so it’s hard to say if this is a flaw in a single batch of the shoes or a widespread problem that has not turned up in mine due to fit, usage, or some other factor.

This issue brings up a larger problem that I’ve been noticing over the past year or so, and one which does make me suspect that this may be a widespread flaw – the plasticy, monofilament style upper material that has popped up on a number of running shoe uppers seems to be very prone to tearing in regions of frequent flex. I’ve heard reports of the same type of forefoot tearing happening in the Saucony Kinvara 2 (Saucony changed the material in the Kinvara 3), New Balance MT00, and Merrell Mix Master – all have uppers made of a similar material. In fact, Merrell recognized the problem quickly and did the right thing by pulling the original Mix Master off the market. They fixed the issue and released the Mix Master 2 just a few months later (problem now fixed by a new upper material in an otherwise identical shoe).

It will be interesting to see whether New Balance responds to this issue, and what the future will be for monofilament-style uppers (I think that’s the appropriate term for the material, correct me if I’m wrong). At least for me, I’ll be wary of purchasing any shoe made of the material going forward – just to much risk for long term durability.

How about you, have you had upper-tearing issue in any of the shoes mentioned above?