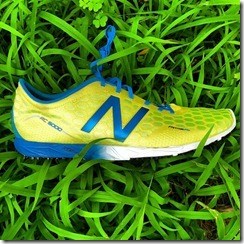 I have a soft spot for ultralight shoes. Of all of the characteristics that I consider when thinking about what I like best in a running shoe, light weight still comes out as preference number one. I was thus pretty excited when I heard that New Balance would be releasing a racing flat called the RC5000, which at 3.1 oz in size 9 would be the lightest road flat on the market.

The New Balance RC5000 is clearly designed to be a direct competitor to the ultralight Mizuno Universe, which I consider to be one of my favorite racing flats. The similarities between the two shoes are striking. The RC5000 weighs 3.1oz, the Universe weighs 3.9oz (both in size 9). The RC5000 has a stack height of 16mm heel, 11mm forefoot (5mm drop), whereas the Universe is 18mm heel, 14mm forefoot. Both shoes have a minimal outsole made of little rubber nubs glued to the bottom of the shoe, and rubber placement is almost identical in the two shoes. Both shoes also have a cutout in the central region under the arch where there is no EVA (presumably to allow drainage and cut down weight. Finally, both shoes have an MSRP of $125 – pricy for so little shoe, I can only assume that it costs more to make a functional shoes that are this lightweight.

I debated for quite awhile whether or not I would purchase the RC5000. First, the $125 price tag seemed excessive for a shoe that might not prove to be very durable (anyone have a lot of miles on these yet?). Second, I often find that flats are too narrow in the forefoot for my taste, and Running Warehouse describes the forefoot as narrow to medium. However, after asking about the shoe on Facebook, I was told by a few people I respect that the forefoot is actually pretty roomy, and I was able to get a pair for a decent price so I took the plunge and bought it (this was a personal purchase, not a media sample).

Two things struck me when I first put the RC5000 on my feet. First, I was pleasantly surprised by how it fit – plenty of room up in the toebox, reasonably comparable to the Mizuno Universe in this regard. I felt no real toe squeezing, and the upper has a bit of give to allow the foot to spread. Second, the sole felt distinctly softer than that of the Mizunos. It might be partly due to the fact that the RC5000 has a fairly well-cushioned (removable) insole, but the Revlite midsole on the RC5000 does feel a tad cushier than the midsole of the Universe. The removable insole is a departure from the integrated, non-removable footbed of the Universe – I suppose you could remove it to create an even roomier fit, but the mesh underneath might be uncomfortable without socks.

Another thing that was very noticeable while walking around in the RC5000 is that there is absolutely zero arch support. In fact, the width of the midsole is rather slim under the midfoot due to an extensive cutout under the arch (see indentation in arch-region in photo below), and the arch is supported almost entirely by the thin fabric upper. In contrast, the Mizuno Universe has a bit of EVA that curls up under the arch, making the shoe feel a bit more secure (its not so much arch support as foam that reinforces the upper). My concerns with this design in the RC5000 are durability and stability – you need to have pretty solid muscular control of your feet in the mediolateral plane to avoid rolling in excessively on the softish sole of this shoe. If I could redesign this shoe, I’d probably fill in the arch cutout with a bit more EVA to increase the width in this region (I’d increase midsole width under the midfoot to make it about equivalent to width under the heel).

The upper of the RC5000 is really nice – it’s extremely thin and the internal surface is quite soft. The cuff around the ankle collar is lined by a very soft synthetic material, with just a bit of cushion behind the Achilles. The interior is where this shoe really trumps the Mizuno Universe. The Universe is lined by a somewhat rough mesh, and the ankle collar is made of a plasticky material that gives me blisters behind my Achilles if I run in them without socks. The RC5000 feels much better on a sockless foot.

I took the RC5000 out for a first run today – did 7.25 miles in them on roads, and did my best to mix up speeds a bit. If my first run is a good indicator of what future runs in this shoe will be like, I’m going to absolutely love this shoe. The sole has just the right of softness for my taste – comparable to a Saucony Kinvara if you shave the midsole height of that shoe down a bit. The Mizuno Universe is a firmer shoe, and is not as good a match for my legs on asphalt.

My concerns about the narrowness through the midfoot seemed unwarranted on the run. I didn’t have any problems running in the shoes, and they accommodate my form very well. I did go sockless, and was very pleased that I didn’t feel the slightest discomfort. Not even a hotspot!

I can honestly say that the RC5000 is a very impressive shoe. I have admittedly only put in one run in them so far, but they handled 7+ sockless miles with ease, and I’m confident enough in them that I’ll probably take them out on my next long run. I’m going to end this “first run” review here, and will update as needed if my thoughts change after additional runs.

The men’s New Balance RC5000 can be purchased at Running Warehouse. They also carry a women’s version, which you can view here.