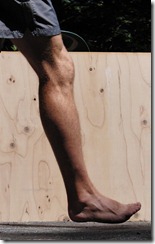 Today on the Peak Performance blog Amby Burfoot discusses a new study by a research team at the University of Massachusetts headed up by running biomechanist Dr. Joseph Hamill (see abstract here). The study is an interesting contribution to our knowledge of how running shoes affect the way we impact the ground while we run, and adds to the growing base of literature showing that running barefoot reduces both peak impact forces and loading rate (how fast the foot impacts the ground) relative to running in shoes. Increased loading rate has been linked to injuries such as stress fractures.

What Hamill and colleagues did was to take a group of ten runners who were heel strikers and have them run across a force plate 10 times in each of four footwear conditions. Three of these were 4mm drop shoes (i.e., 4mm heel lift relative to the forefoot) that varied only in the total thickness of the midsole cushioning (all had a thin outsole). In other words, the shoe conditions were as follows in terms of midsole cushion: 4mm heel, 0mm forefoot; 12mm heel, 8mm forefoot; 20mm heel, 16mm forefoot. The fourth condition was to have the runners go barefoot. None of these runners appear to have been habitual minimalist or barefoot runners, so the study is basically looking at how a runner used to running in a typical modern shoe changes when they go to a 4mm drop shoe (of varying midsole configuration) vs. barefoot. This is short term, immediate change as the runners did not run for an extended period of time to acclimate themselves in any of these shod or unshod conditions (acclimation was only 5-10 minutes prior to data collection).

What the authors found was that impact characteristics and knee/ankle stiffness did not vary among the 3 shod conditions. The runners all remained heel strikers in the 3 iterations of the 4mm drop shoes, though details of gait kinematics such as stride rate, length, etc. were not reported. However, when running barefoot, which presumably was a novel behavior for these runners, they adopted a midfoot/forefoot strike (I was a bit confused by how they define midfoot since they talk about the foot contacting on the midfoot after which the heel comes down – I tend to think of midfoot being simultaneous contact of heel and the base of the fifth metatarsal). Associated with this is the fact that impact peak and loading rate were significantly reduced, time to reach impact peak decreased, and ankle stiffness increased in the barefoot condition.

So what does all of this mean? Basically, if you have been running with a heel striking gait in traditional modern shoes, it is unlikely that going to a 4mm drop shoe will immediately cause you to lose your heel strike. However, going barefoot will cause you to adopt a very different running style whereby you lose the heel strike and adopt impact moderating behaviors (e.g., a different footstrike) that reduce peak impact force and the speed with which the foot collides with the ground. These are not entirely surprising results to anyone who has tried running barefoot on a hard surface, but do add to the growing literature showing that running barefoot is very different than running in a shoe with a cushioned heel lift. Whether or not these changes are linked to injury reduction is an open question, and it is possible that a midfoot/forefoot stride could simply shift primary injury locality away from the knee (minimalist runners often report that changing style helps with knee pain) and to the Achilles/calf, ankle, and foot, particularly among those not acclimated to running with barefoot mechanics.

What the study does not tell us is whether running in the shoes with the 4mm drop midsole would cause changes in gait over a longer period of time. Most runners who have gone to a more minimalist shoe report that gait change takes time, and that shoes with a lower heel facilitate a change in gait. It doesn’t happen immediately, as this study demonstrates, but it would be interesting to see if patterns changed if these runners were to run exclusively in a 4mm drop shoe for say 6 months. Many so-called minimalist shoes coming out have adopted a 4mm drop midsole or something close to that (e.g., NB Minimus, Saucony Kinvara, Mirage, Fastwitch, etc.), and thus information on potential changes with long term acclimation is much needed.

Perhaps the biggest take-home message from this paper is that if you want to get a handle on what more natural running feels like, simply take off you shoes and try running barefoot. Barefoot and minimalist runners often say that the best way to work on gait change, should that be your goal, is to start by running barefoot, and once you learn the barefoot stride it will be retained when you start running in shoes. I tend to agree with this given my own experience, though I did most of my form work in the Vibram Fivefingers. I can now run quite comfortably in 4-6mm lift shoes with a midfoot stride, but it was a long process to get to that point, and reprogramming stride can take quite a long time.

All in all, this was a cool little study with a simple hypothesis and fairly straightforward results. Like other studies have, it demonstrates that barefoot running is different than running in shoes, and that impact parameters change when shoes are removed. Does it mean we should all be running barefoot all the time? Of course not! That might work for some, but it’s impractical for others, including me when dealing with 3+ months of ice covered sidewalks and roads as I have this winter. I personally am not a regular barefoot runner, but have done so on a few occasions (up to 2 miles on asphalt) and can attest that it is very different than running in shoes. We still have a lot to learn, but it’s good to see scientists addressing these questions, and this paper was a nice contribution.

As is typical of just about any scientific paper, I’m left with more questions than answers after reading this one, but such is the nature of research. Among the things I’d like to know:

1. What would have happened if the runners ran in a typical shoe with a 12mm heel lift? Would this have differed than the 4mm drop shoes?

2. Extending the previous thought, I’d like to see shoes of varying heel lift tested so as to see if there is a threshold below which gait does change in a heel striking runner. Do you have to go all the way to barefoot? Other studies have shown that shoes like the Vibram Fivefingers do a reasonable job of simulating barefoot mechanics (Squadrone and Gallozzi, 2009), so it would be interesting to see at what point we lose that similarity as we modify midsole properties.

3. How would the results of this study vary if habitual minimalist/barefoot runners were tested?

4. As discussed above, how does acclimation affect the results? All too often studies like this are done by exposing heel striking runners a novel condition (low drop shoe, barefoot) and asking them to run without acclimating to the novel condition. The results of this study show that running barefoot results in almost immediate changes, but even the barefoot runners in this study produced an impact peak, which is typically not the case for habitual barefoot runners such as those examined by Lieberman et al., 2010. Clearly a motor learning process must be involved, and this needs to be studied in more detail.