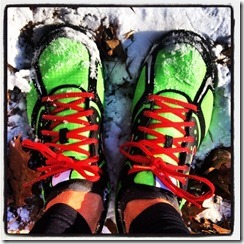 Newton doesn’t have a big toehold in the trail running market. Their first attempt at a trail shoe, the Terra Momentum, was basically a slightly modified version of their Sir Isaac trainer (a shoe the I didn’t like at all) and I passed on trying it out. Newton is taking a second crack at a trail shoe with the release of the BoCo AT (not the best name…). Based on early specs and images, the BoCo AT actually looked to share some design features with the Newton Energy, one of my favorite road shoe this year, and thus I was excited when a pair arrived on my doorstep (Disclosure: the shoes reviewed here were media samples provided free of charge by Newton).

When I took the BoCo AT out of the box my initial though was that they looked like a great winter running shoe. Though I’m not sure this was Newton’s intent, the red and green colorway just screams Christmas. If Santa Claus is a trail runner, these are the shoes for him! The lugged forefoot lugs (lugs on lugs, double lugged, secondary lugs, not sure how to describe them…) looked a bit cleat like which suggested good traction in snow/crusty ice, and the upper fabric was much thicker than I expected which suggested warmth. My initial feelings have been confirmed after about 20 miles of running in the shoes, mostly in sub-freezing temperatures on trails and rocky dirt roads (I was going to hold off for a few more runs before reviewing, but I think I’ve got this shoe pretty well pegged for my purposes and Nate may do a follow up review from the ultra perspective).

The first thing I noticed about the BoCo AT after putting them on was the fit. Near perfect on my feet. Nice heel and midfoot lock with a spacious forefoot and minimal toe squeezing. The insole is thin and of uniform thickness, and thus this shoe has none of the heel slippage I experienced with the Newton Energy (which has an insole that is thick and cushy under the heel). The BoCo AT fits the way I wish the Saucony Peregrine would fit – the latter is cramped near the toes which is a mark against an otherwise solid trail shoe.

I bring up the Saucony Peregrine because in some ways the BoCo AT reminds me a lot of that shoe. They are similar drop (4mm for the Peregrine, 3mm for the BoCo), similar weight (10.1 oz for the Peregrine, 9.7 oz for the BoCo), and both feel similarly bombproof on the trail. I often find that the more protective a trail shoe is, the less I like the ride on the road. Such is the case with the BoCo AT – again like the Peregrine, the BoCo is kind of a harsh ride on pavement. The midsole actually feels soft, not quite Newton Energy soft, but it has some give on hard ground . However, the outsole rubber is extensive and thick and does not ride well on the road. Take it off the road and it shines. This isn’t really a fault as the tradeoff is great protection for its intended use: trail running. I’ve run about 15 miles of rooty trail and rocky dirt road in the BoCos and have felt very well protected on all surfaces. The lugged forefoot lugs  in particular (green areas in the photo below) protect the foot quite well, and landing on rocks square on the forefoot causes no pain.  This is not a shoe you choose if you want great ground feel, but if protection on trails is your need, these will serve you quite well.

Another area where the BoCo performs similarly to the Peregrine is traction. On my first run in the BoCo’s I joined Nate for 5 miles on wet, leaf covered trails behind our local hospital. There was quite a bit of up and down, and I never had any traction issues. On my second run about half the distance was on snow dusted asphalt, and they handled that nicely as well. Anybody who has run in a Newton shoe before knows that the forefoot lugs give their shoes a bit of a different feel, and when you add secondary lugs to the protruding forefoot lugs it makes fore great traction when landing on the forefoot. Everything is pretty much frozen up here in NH already, so I haven’t gotten into any mud or standing water, but I think they will do quite well on the crusty ice that covers our sidewalks much of the winter (still waiting for the first big snowstorm!).

One of the things I like about the BoCo AT relative to many of Newton’s shoes is that although there are only four forefoot lugs, Newton has added lug ridges to the medial and lateral forefoot on either side of the lug row. This helps with forefoot stability, which is particularly important on uneven trail surfaces. Many people have noted the stability issue in Newton’s 4-lug road shoes, and though Newton didn’t mimic the 5-lug design of the Energy and MV3 here, they solved the issue in a different way quite effectively. 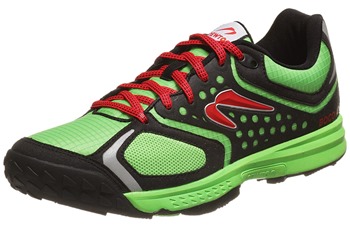 One final thing I’ll mention that was a pleasant surprise is warmth. I didn’t realize until I started writing this review that the BoCo AT has an all-weather upper with a water-resistant coating. I’m not surprised though as one of the distinct things I have noticed about the shoe is that they keep my feet really warm. I’ve run most of my miles in them in sub-freezing temperatures, including a particularly frigid run last week in Maine, and my feet have stayed quite warm in all cases. I haven’t been able to test the water resistance as we mostly have ice now, so if you have any experience getting these wet leave a comment. My worry is that these shoes might run pretty hot in summer, but for a winter shoe they seem pretty much ideal.

I’ve been pretty impressed by the Newton BoCo AT so far. I haven’t run in them a ton yet, but with the worst of winter ahead of me I foresee them getting a fair bit of use since they combine good traction with a warm, weather-proof upper. I’m really interested in trying them on crusty ice as I think they will serve quite well in nasty conditions. The ride is great on softer surfaces, not as great on asphalt, but they really weren’t built for use on the latter. If you’re in the market for a winter trail shoe with a bit of Christmas spirit, the Newton BoCo AT is definitely worth a look.

(Note: as I mentioned in the review, Nate also has a pair of these and I hope to post some thoughts from him as well in the near future – stay tuned!)

The Newton BoCo AT is available for purchase at Running Warehouse, Amazon.com, and Zappos. MSRP is $129.00.