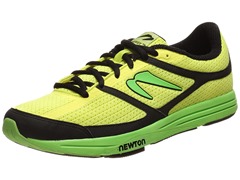 The first time I put on the Newton Energy NR I didn’t know quite what to think. My first impression was that they were crazy soft and that the heel lockdown was really slippy. I though maybe Newton had swung and missed with the newest shoe in their lineup. (Disclosure: These shoes were media samples provided free of charge by the manufacturer)

My first run in the shoes wasn’t bad, and heel-slippage seemed to be a non-factor once I got moving. But, they were still ridiculously soft and I remained skeptical.

Shortly after that first run I came across a discussion about the Energy on the Running Shoe Geeks group on Facebook (join us!), and most of those who had run in it were also complaining about the softness and loose heel lock, and the consensus seemed to be that the shoe morphed into something beautiful if you ripped out the insole entirely.

So, on my next run I swapped out the included insole for a thin, flat Skechers GoRun insole and the shoe was transformed to the point where I would say that if I were running a marathon this Fall I’d almost certainly choose the Energy for the race. It’s a perfect match for my stride over long distances.

The Sole Makes the Shoe

The Newton Energy is the second Newton shoe model (along with the MV2/MV3) to incorporate their new 5-lug design (see below right):

One of the issues I have had with previous Newton shoes like the Distance Racer (see above left) is that the four lugs do not extend to the margins of the sole on each side. This makes the shoe feel a bit unstable mediolaterally, particularly when making turns in the shoes. Furthermore, the lugs protrude downward quite a distance from the sole making it feel like you are rolling over a speed bump if you walk or run heel-toe in the shoes (I hate walking in 4-lug Newtons). The new lug design fixes both of these issues in that by adding a lug they now extend all the way to the inner and out margins of the sole, and the lugs no longer protrude as much – I can walk much more comfortably in the Energy than in the Distance for example.

The other big, big difference between the sole of the Energy and the sole of other Newton shoes is that it is indeed very soft. It’s soft to the point where if you heel strike hard with the insole removed you’d likely bottom out the cushioning. The only shoe I can compare it to in this sense is the original Skechers GoRun. Now, this is where the lugs really save the day. Because the lugs are made of firm rubber and are overlain by a firm plate, the forefoot gives a bit initially but has a much firmer and responsive feel to it during propulsion and toe-off. As someone who primarily loads from the midfoot forward, the shoe is a great match for my stride. It’s firm exactly where I need it to be, and if I do load the heel slightly I barely notice because of the softness in that region. I’m not sure I’d like running in the Energy if I were a hard heel striker, but if that description doesn’t fit you then this shoe is amazing.

As for stack height, with the included insole the Energy is reported to be about 6mm drop. With the insole removed it’s about 2-3mm drop. That sounds about right based on how the shoes feel on the run (my caliper batteries are dead so I couldn’t measure it myself…). Weight is reported to be 8.6 oz in men’s size 9.

As mentioned at the beginning of this review, the fit of the Energy felt off the first time I tried them on. The heel wasn’t locked down well and the midfoot felt a bit tight. After swapping out (or removing) the insole for a thinner one the fit is great. Snug through the heel and midfoot, and a roomy but not spacious forefoot (similar to other Newton shoes I’ve worn). Running Warehouse reports that the shoe runs 1/2 size large, but I found that a size 10 fit me fine (however, I do wear a 10.5 in a lot of shoes, including most Saucony models). You definitely will not need to size up in these.

The upper is composed of a stretchy mesh that is not at all constricting, and the interior is a smooth material that feels good against the bare foot. The interior of the heel and ankle collar is well cushioned and comfortable. There is a plastic heel counter, but no noticeable arch support with the insole removed. I tried running sockless in them and got blister under the ball behind my big toe, but that could be do to the fact that I swapped in a non-Newton insole. It wouldn’t be fair to criticize Newton for that.

I’ve run 45 miles in the Newton Energy in the past 2-3 weeks, including runs of 13 and 14 miles. This is one of those shoes that disappears on my feet, and quite honestly, if I had to choose just one shoe right now for all of my runs over 10 miles this could very well be it. The forefoot is responsive enough for distance racing speed, and it’s soft enough for slow, easy miles. I’d opt for something lighter and firmer for a 5K, but this shoe would handle most of my other needs without issue. I’m a big fan!

Regarding durability, I am seeing wear of the anterior 1/3 of the lugs, to the point where the tread is no longer visible. There is still a ton of rubber left though and I have found this to be typical of my experience with other Newton shoes. Wear on remaining portions of the sole is minimal.

If you’re a light heel striker to forefoot striker this is definitely a shoe to consider, and at $119 it’s the lowest price shoe in Newton’s collection. These days it’s priced right within range of many other shoes in its niche, though I’d love to see the price down around $100. If you’ve been wanting to try a Newton, this would be a great place to start.

The Newton Energy is available for purchase at Running Warehouse, Zappos, City Sports, and Kindrunner.

For another take, check out Thomas Neuberger’s Newton Energy NR review at Believe in the Run.