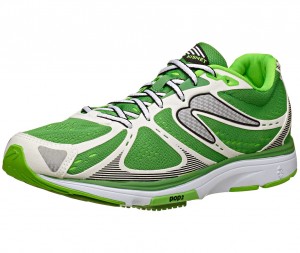 Newton made a bit of a splash this year with the release of a bunch of new shoe models built on their new 5-lug forefoot platform. If you’re not familiar with Newton’s lug system, it’s basically a set of raised, elongated lugs under the forefoot of the shoe that are intended to help cushion the forefoot as they are compressed, and (perhaps) provide a bit of recoil to propel you forward as the lugs pop back out. I use the word perhaps because I’ve never had a strong sense of any recoil/propulsion from the shoes, but I have enjoyed running in them nonetheless.

Newton used to use a 4-lug system, and it created a bit of instability since the lugs did not extend to the margins of the shoe (I occasionally felt like I was rolling off of them, particularly while cornering). The 5-lug system has improved stability quite a bit since the lugs now span the entire forefoot, and I have had positive experiences running in both the original Newton Energy and the Newton Motion III (both have 5 lugs).

Among the new shoes released this year were the Newton Kismet and Newton Fate. I ran in both a bunch over the summer (this review is long overdue!), and both are in the middle of the Newton range in terms of both price and lug prominence/responsiveness. Newton now differentiates their shoes as POP1, POP2, or POP3 – lower POP numbers mean more prominent, responsive lugs (e.g., POP1 shoes like the Distance III or Motion III), and higher POP numbers indicate more forgiving, less protruding lugs. The Kismet and Fate are both POP2 shoes. I’m going to cover the Kismet here, and in a forthcoming review I’ll cover the Fate (the shoes are very similar).

Per data on Running Warehouse, the Kismet weighs in at 9.3oz in men’s size 9, and has a stack height of 27mm heel, 20mm forefoot. In contrast, Newton reports that the Kismet is 4.5mm drop, and that number is actually written on the side of the sole. Not sure why the discrepancy, but my caliper measurements come closer to what Running Warehouse reports (it’s a bit tricky to measure with calipers though due to a central cavity under the heel). In any case, 2.5mm is not a huge difference. MSRP for the Kismet is $129, so on the lower end of the scale for Newton shoes.

The Kismet is a great looking shoe. If there is one thing Newton does well, it’s to make shoes that pop with color, and the bright green of the Kismet really stands out. The upper is composed of an outer layer of engineered mesh that is reminiscent of the upper of the Nike Pegasus 31 or Free 3.0 v5 – very stretchy and soft. Internal to the outer mesh is a layer of closed mesh – also very soft against the foot, and does a good job of keeping road grit out of the shoe while remaining breathable. Upper support is provided by faux-suede overlays and a fairly prominent heel counter. On the whole, as far as shoe uppers go, I like this one a lot.

Fit is where Newton almost always nails it for me, and the Kismet is no exception. I’ve always appreciated the relatively high-volume toebox of Newton shoes, both in terms of width and height, and the Kismet toebox is awesome. Plenty of room for the toes to move around, and no restriction on the foot. I think the volume of the forefoot enhances breathability since it does not tightly wrap the foot (there is room for air to circulate). The insole is about 4-5mm thick and adds some arch support – if you need more volume then swapping for a thinner insole could help.

It’s impossible to review a Newton shoe without talking about the lugs. The biggest difference I can see between the lugs on the POP2 Kismet and those on the POP1 Motion III is that the front ends of the Kismet lugs are rounded off a bit. This makes for a slightly smoother transition as you roll forward over them (I can feel this while walking around with the Motion on one foot and the Kismet on the other). Both the POP1 and POP2 shoes have an open chamber above the lug membrane into which they compress under pressure (see image below via Newton), whereas POP3 shoes have a foam-backed chamber. 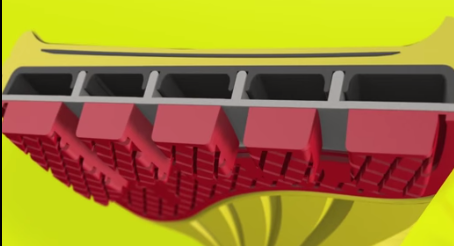 If you’ve never run in a Newton shoe before the lugs can take some getting used to. When I come back to Newtons after not having run in them for awhile it always takes me a bit to re-acclimate to the lugs, but the sensation of the lugs on the Kismet does seem to disappear after a few runs. I have not yet tried any of the POP3 shoes (Aha or Energy II) so can’t compare to those yet.

The heel of the Kismet feels fairly soft and forgiving, and this makes for a comfortable ride for my stride (I have a mild heel strike in most shoes – and yes, running in Newtons does not change this). Outsole coverage is adequate with most major wear areas covered by some amount of rubber outsole. I am seeing some wearing at the front of the forefoot lugs (see photo below), but this is typical of my experience with Newton shoes – I think some amount of friction is generated as my foot roles forward off of the lugs. 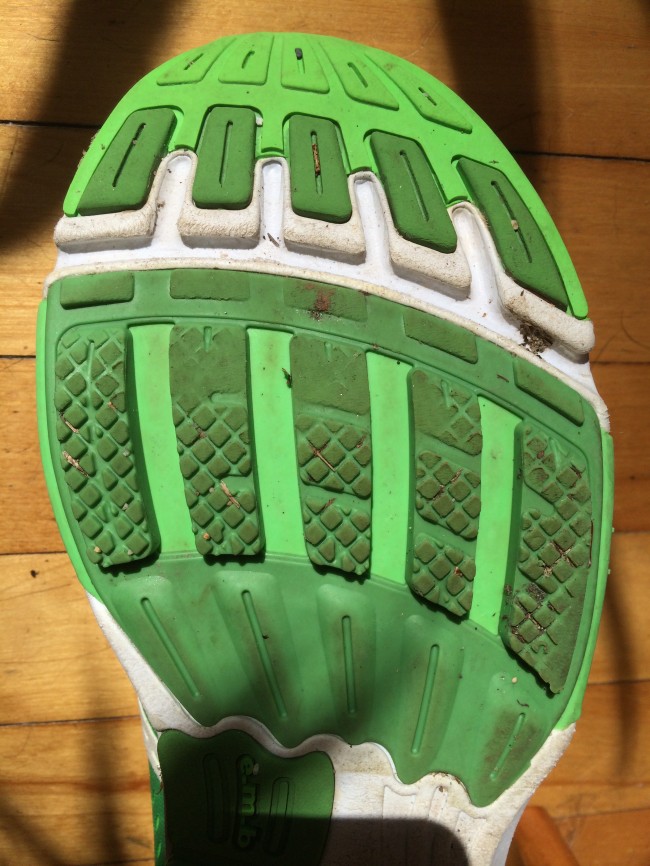 I mentioned above that the Kismet and Fate are very similar shoes. The Kismet is billed as the “stability” shoe of the pair, whereas the Fate is the “neutral” equivalent. Near as I can tell the only major difference is the presence of an “extended medial bridge” in the Kismet (labeled e.m.b. in the sole photo above). Basically, the sole under the midfoot is a bit wider in the Kismet than in the Fate,which supposedly improves stability (this same e.m.b. is also present in the Motion III, which is the higher priced equivalent to the Kismet). To be honest, I can’t really feel much difference between the Kismet and Fate, so not sure how much of an effect the wider midfoot has on the ride.

My take on the Kismet in terms of ride is that it’s a very comfortable shoe capable of handling distances all the way up to the marathon. Cushioning is more than adequate for running long, and I like the lower-profile feel of the lugs. It’s not as responsive as a racing flat, but it gives back a bit more than a softer-soled shoe. Fit is near perfect on me, and I’ve enjoyed nearly every mile I’ve run in them. 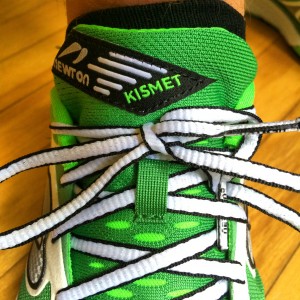 If you are interested in trying a Newton shoe, the Kismet would be a great place to start, particularly given that at $129 MSRP they are priced lower than most of the original core line of Newton shoes. To be honest, I’m not really sure what benefit you get paying $46 more for a shoe like the Motion III – the ride just isn’t that much different, and I don’t anticipate that durability would be that much different either. The Kismet is a shoe that can eat up a lot of miles, and I’d rank it among the better shoes I have run in this year. Definitely worth a look!

The Newton Kismet is available for purchase at Running Warehouse, Zappos, and Amazon.com (or your local running specialty store). Purchases made via these links provide a small commission to Runblogger and help to support the production of reviews like this one – thanks!