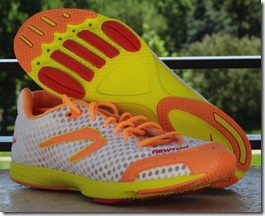 The past few weeks have been a whirlwind of travel for me, and my posting rate here on the blog has suffered a bit as a result. My most recent trip was a short jaunt to Boulder, Colorado to attend Newton Running’s annual retail summit. Newton was kind enough to invite me to serve on a panel tasked with discussing the “Elements of a Sustainable Runner.” In addition to myself, panelists included Danny Abshire of Newton Running, Blaise Dubois of The Running Clinic, ironman world champion and ultrarunner Heather Fuhr, Dr. Ivo Waerlop from Summit Chiropractic and Rehabilitation, and 1972 Olympic marathon gold medalist Frank Shorter. Stay tuned for more on this discussion as I am in the process of trying to get the audio up in an easily accessible format.

One of the benefits of attending the Newton summit was that all participants were given a pair of Newton’s forthcoming MV2 (pronounced MV squared) racing flat, which will be available for sale next month (MSRP $125). I learned quickly upon arriving in Boulder why people consider it to be one of the best locations for running in the country, and I more than took advantage of my time there by running about 20 miles over two days (elevation gain and altitude were tough!). About 15 of these miles were on the Boulder Canyon trail in the MV2, and I feel comfortable sharing my initial impressions of the shoe (I will update with additional thoughts if needed as I accumulate more miles).

Newton has long been a promoter of what they like to refer to as “natural running.” In a nutshell, natural running can best be defined as the form you would use if you were running barefoot – midfoot/forefoot landing close to the center of mass of the body (among other things). All of Newton’s shoes are characterized by having a relatively small height differential between the heel and forefoot, but until now most of their shoes have retained a fairly thick midsole (I have previously reviewed the Newton Sir Isaac and the Newton Distance Racer). With the MV2, Newton introduces it’s first ultralight racing flat (< 6 oz). Unlike many flats, the MV2 is true to the name of the category by being a zero drop shoe, meaning that the heel and forefoot are level with one another while the foot is inside the shoe (i.e., no heel lift). I haven’t had a chance to measure the total sole thickness yet, but it’s comparable to a typical road or cross-country flat. 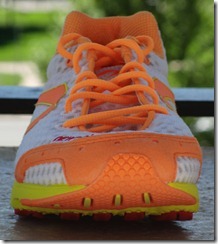 I’ve been excited to try out the MV2 ever since I had the opportunity to take a look at an earlier prototype back in January, and because I have enjoyed running in the Distance Racer quite a bit (which is only about 2mm heel-forefoot drop). All Newton shoes are characterized by the presence of protruding lugs under the forefoot. The forefoot lugs depress when you contact the ground, and release on pushoff – whether this provides any meaningful performance benefit I can’t say, but it’s a novel concept. One of the few complaints that I have about the Distance Racer is that because it has only four centered forefoot lugs, it can be a bit sloppy when changing direction. One of the big changes in the MV2 is that Newton has found a way to add a fifth lug, and the lugs in the MV2 extend right to the border of the sole on each side (see photo below) – this provides a much more stable feel under the forefoot than in either the Distance Racer or Sir Isaac. Another thing I like about the MV2 is that the lugs are not as prominent – they don’t extend as far out from the sole of the shoe. This makes the MV2 a bit more comfortable to walk in than the other Newton shoes (walking in the Distance Racer or Isaac feels like walking over a speed bump with each step).

The remainder of the sole of the MV2 is similar to to that of other Newton shoes. The midsole is made of the same material as other Newton shoes, which means that the MV2 should retain cushioning better than EVA based flats (i.e., it will not break down with repeated compression like EVA does). There is rubber in all of the right places, so I expect durability will be good as well (after 15 miles I can barely detect a scuff on the sole of my MV2’s). The sole is quite flexible, and can be bent and twisted with relative ease.

The upper of the MV2 is very minimal and composed of a synthetic mesh that breathes very well. The mesh is a bit scratchy in spots, and I haven’t tried sockless running in them yet, so no comment on that yet. Aside from a very flexible heel counter, there are no structural elements in the upper. From an appearance standpoint, the upper retains the bright coloring of other Newton shoes, and color variants are in the works (see black/yellow version at bottom of post).

In terms of fit, the MV2 runs small, and I had to size up from a 10 to an 11 to get a comfortable fit (I rarely ever size up). Many people I spoke with at the summit sized up by at least a half size. If I had to change one thing about the MV2 it would be to widen the toebox. Like many who have made the move into more minimalist shoes, I have grown accustomed to wearing shoes that run wide in the forefoot, and the MV2 last is fairly narrow (far less roomy than other Newton shoes I have worn). The lateral edge of my foot hangs over the midsole when seated in the shoe, as it does when wearing most racing flats or spikeless cross country flats. I would compare the fit to a shoe like the Brooks Mach 11 or maybe the Saucony Grid Type A4. I didn’t find them uncomfortable at all on the run, but I’ll need to go for more than 5 miles in order to determine whether the tight forefoot fit becomes an issue. If you don’t mind a typical racing flat last, you probably won’t have any problem with this shoe. If your preference is for a shoe that fits like the New Balance MT101, Minimus, or Altra Instinct, then this one won’t suit you very well.

The sockliner of the MV2 is removable, though the material underneath is a scratchy mesh, so sockless running without the liner might no work too well. There is no noticeable arch support in the shoe, and the sockliner is completely flat. Newton is taking an interesting approach to their first zero drop shoe by including an oval-shaped wedge of 3mm-thick EVA that can be inserted under the heel of the sockliner for those who want to transition a bit more slowly into a flat shoe. I have not tried this “heel lift” yet, but I know a few people who routinely alter the lift of their shoes in this manner. 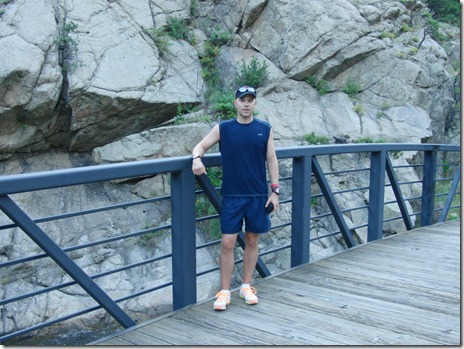 As I mentioned, I ran about 15 miles in the MV2 while out in Boulder (that’s me above in the MV2’s on a bridge in Boulder Canyon). All were mostly on either concrete path or gravel, and the shoe felt great underfoot, and the narrow forefoot didn’t bother me while on the move. The sole under the forefoot is extremely firm in the region of the lugs, and gives good ground feel. Because the forefoot feels firmer than the heel, the shoe actually feels like it might be negative drop at times during stance, and it gives the calves a really good workout. If you aren’t accustomed to running in a zero drop shoe, this one definitely demands a gradual transition. 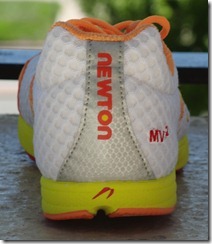 In summary, the MV2 is an extremely light, zero drop shoe that will appeal to both Newton fans and those looking for a flat shoe that retains a bit of midsole underfoot. The lugs are not as noticeable as those on other Newton shoes, and the fact that they extend to the edges on each side is a big design improvement. I suspect that this shoe will retain the excellent durability of other Newton shoes, and thus may outperform many EVA based racing flats in this regard. Minimalist runners who prefer a wide toebox will probably not enjoy the feel of this shoe, but if you are accustomed to running in racing flats or XC spikes then this shoe will feel fine.

The Newton MV2 is set to be released in September 2011, and the MSRP is $125. They are currently available for pre-order on the Newton Running Website.

Below is a fuzzy picture of a black color variant of the MV2: