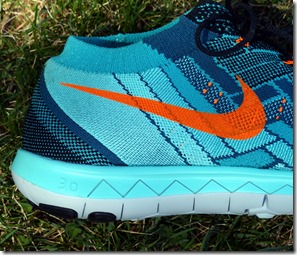 The Nike Free line of running shoes was originally designed to mimic barefoot running on grass. All shoes in the line are characterized by an extremely flexible sole, and the three models vary in upper construction and the amount of sole cushioning.

The Free 5.0 has the highest heel-forefoot drop and a more traditional, though still fairly minimal, upper. The Free 4.0 has a Flyknit upper with a tongue and it occupies the middle ground with regard to amount of cushion and structure. The Free 3.0 is the most minimal  (lower number = more minimal) of the three shoes with the thinnest sole and a Flyknit upper with no tongue. It’s basically a sock with a sole attached.

I’ve long been a fan of the Free 3.0 line. The original 3.0 remains one of my all-time favorite shoes, and I’ve run in several of the subsequent iterations. However, I passed on the 2014 version of the Free 3.0, which was the first version to incorporate the Flyknit upper. I’d heard that the upper was pretty tight (it needs to be somewhat tight since it is what secures the foot to the sole – the laces do very little), and the $140 price tag was a bit much to swallow. However, it’s one of those shoes that readers have asked about a lot, and several have suggested that I try it.

I was recently contacted by Nike about the new Free line, and they sent along a pairs of the 2015 Free 3.0 and 4.0 for me to test out. I’ve now been running in the 3.0 for several weeks, and it’s time for a review. (Disclosure: The shoes reviewed here are media samples provided free of charge by the manufacturer.)

The upper of the Free 3.0 is about as minimal as you can get. It’s a single piece, knit upper with Flywire extending from the sole to the lace attachments. There are only three lace loops on each side, and the laces are very thin. That’s about it!

In terms of function and fit, I’ve come to love the upper on this shoe. It isn’t nearly as tight-fitting as I anticipated, and it does a great job of securing my foot against the sole. My guess is that fit and security will be highly dependent on foot shape – if you have a particularly wide foot it may feel a bit restricting, if you have a narrow foot you may have some lack of security, though in the latter case the laces may help a bit. Personally, I haven’t cinched the laces at all and tension in the upper weave is pretty much solely responsible for keeping the shoe on my foot.

Given that it is essentially a sock with a sole, sockless wear is a perfectly viable option with this shoe (though removal of the tag from the insole might help avoid some friction).

My favorite thing about the upper of this shoe is the fact that it is super easy to slip on without messing with the laces. In fact, I haven’t touched the laces since the first time I put the shoes on my feet. You can simply grab the upper behind the heel, stretch it back, then slide your foot in. Love this, and makes it a super easy shoe to get on and off for casual wear. 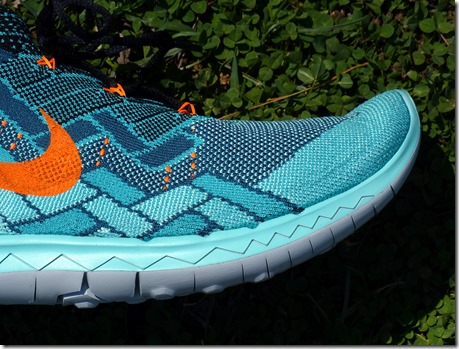 One final comment on fit – you will probably notice from the images of this shoe that it appears to have a pretty substantial amount of toe spring. The reason for this is the tension in the knit upper combined with the flexiblity of the sole. It flattens out once your foot is in the shoe  – the foot stretches the upper and weight pushes the sole flat. I have not had any issues with this aspect of the shoe.

The first thing I noticed about the sole of this shoe was that the forefoot felt surprisingly cushy. Despite having the thinnest sole of the three running shoes in the Free line, I feel like the 3.0 has the best forefoot cushioning of the group, and it remains noticeable when running in the shoes. In contrast, the heel has a firmer feel, and this makes for a unique ride – it’s more common for the reverse to be the case. Combined with the extreme flexibility of the siped sole, the unique feel of the cushioning has made for enjoyable ride  runs up to 9 miles so far. I actually think I prefer the 3.0 for longer runs over it’s more structured sibling the 5.0 – the 3.0 is one of those shoes that just disappears on my feet.

One concern present with every Free shoe is that the grooves in the sole tend to pick up rocks and other small road debris. I’ve certainly picked up my share of pebbles in the 3.0, but no huge rocks that have forced me to stop for a clean-up during a run. That being said, I wouldn’t recommend taking these off-road if you are worried about picking up debris. 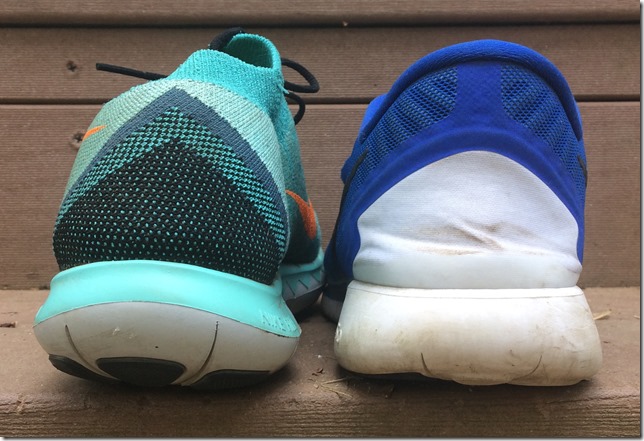 As for durability, there is not a lot of rubber on the sole of this shoe – just a few small patches around the heel and under the big toe. Wear after about 30 miles of running and considerable casual use has been minimal so far. Interestingly, I saw a fair amount of wear on the heel rubber of the 5.0 after similar mileage. This has not happened in the 3.0, and I think it may be due to the more rounded sole in the heel region of this shoe (see photo above) – it doesn’t catch the ground as easily as that of the 5.0 (I tend to scuff a bit on the outer heel). 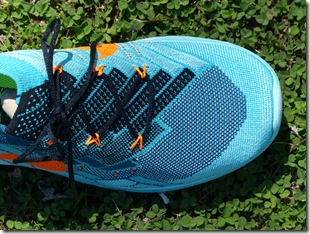 If you want a minimally structured shoe that feels like an extension of your foot but retains solid cushioning, the Free 3.0 would be one of my top recommendations. If you are new to this type of shoe, I would recommend a slow transition due to the extreme flexibility and minimal structure of the upper.

The 3.0 is also a great choice as part of a shoe rotation if you want something to force you foot to do a bit more work on occasional workouts. My only real concern with this shoe is the price tag – $140 is pretty steep, and the slightly cheaper 4.0 offers a similar ride and a more traditional Flyknit upper. If you can afford it though, the Free 3.0 Flyknit is worth a try!

The Nike Free 3.0 Flyknit is available for purchase at Running Warehouse US, Nike.com, and Wiggle (UK).